Inside Dope: Behind the Scenes of Ep. 22 [Jordan Morgan]

Shane stuck around Vegas instead of driving back to LA, which meant he would have to call in via Skype to record the latest episode of Dope Stories -- Episode 22 with Jordan Morgan. We have a kick-ass producer (DJ Trent) who cleans up the audio on Skype calls, which can get dodgy at times. We try to minimize Skype usage and prefer to record as many episodes as possible inside the Dope Stories studios in the Slums of Beverly Hills, however, Shane was stuck in Vegas and forced to call in.

On the flip side, because Shane was in Vegas it was easy to wrangle our guest for the episode -- professional poker player Jordan Morgan. It' common for pros to share hotel rooms when they are on the road and Shane often traveled with Jordan. They were roommates in Vegas this past week. When we started recording the episode, Jordan had just won a WSOP tournament (and his first-ever WSOP bracelet) and he walked into their hotel room while I had Shane on Skype, so we literally interviewed Jordan the moment he returned to his room. Perfect timing!

Jordan Morgan is one of the nicest guys on the circuit and he's been friends with Shane for a decade. Jordan recently was prescribed Adderall by his local physician and Jordan claimed the ADHD drug helped him get his life back on track. For his interview segment, we spoke about the effects of Adderall and how it helped him get out of a rut in his life. Pretty crazy coincidence... only 90 days after getting a script for Adderall, Jordan finally breaks through with his first WSOP win after playing that event every summer for the last 8 years!

Jordan's interview occurs in the second-half of the episode. The first part of the episode is a discussion on Electric Daisy Carnival and some of the worst festival experiences that Shane and I encountered. I told the story about Coventry, Vermont and the spun-out girl who wanted to trade a puppy for cocaine. Yikes!

Shane also quizzed me about my writing process. He knew I was working on the second draft of a new novel Fried Peaches, but wanted to know how all of that happened. I told him about how Ray Bradbury directly and indirectly inspired me as a writer. I wrote about Ray Bradbury's influence before. I'm not a huge fan of his work, but I was deeply affected by one of his interviews in which he explained how fictional characters came to him and he simply transcribed their stories. 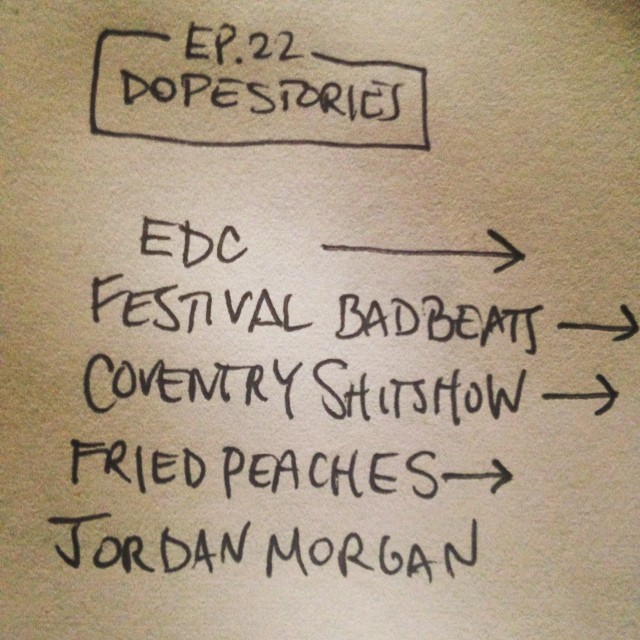 Also, check out other Inside Dope posts, which give you a behind the scenes look at the development of each episode.

Here's Inside Dope for interviews we conducted...

Here's the Inside Dope for the last month of episodes...