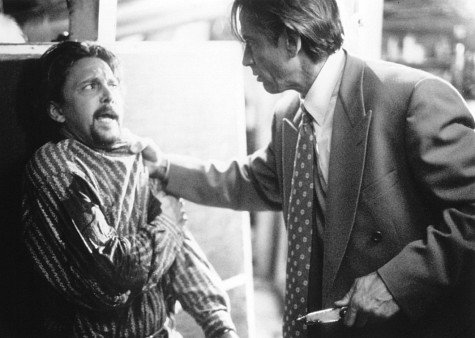 Insomnia is a bitch.

And that's on a good night.

3am. Nothing is worse than having insomnia in a place where you have to be quiet. I'd love to watch  Nicky had to get up early to go to work, but my neighbors have a newborn baby. There's only so much mobility you can have with headphones and a laptop. I'm in a shitty situation... I can't make too much noise or the baby wakes up, or on the flip side the baby cries on an unpredictable time schedule. That little shithead woke me up last night and I was never able to get back to sleep.

4am. Miserable mood. Stewing in the dark with the only illumination the flickering glow of the boob tube. On bad stretches for a week or more when I can't sleep more than an hour, I sink into a foggy depression until I finally get a decent night of sleep. On the average night of sleeplessness, I'll toke a few hits off doobie to help put me back to sleep, but my upstairs neighbor has been complaining incessantly at the odor, even though I have a legal medical prescription. I'm in a no-win situation, so I have to sneak around the alley at 4am to blaze up and hope I don't get shanked by a homeless person.

5am. I'm awake, yet exhausted, which is the worst possible state to be in because you're drowning in your own crankiness. So what do I end up doing? Watching a flick, a bad 1995 flick titled Night of the Running Man. Pretty much right out of the Skin-a-max repertoire. It seemed like a bad knock off of a Tarrantino-inspired script with Andrew McCarthy as a Vegas cabbie and Scott Glenn as a mafia hitman. Oh and how can I forget... a former Dallas Cowboy cheerleader as the main female lead.

Night of the Running Man was original a pulpy novel that ended up on the big screen... sort of... it went right to video. I'm sure the novel was 1000% better, but it was compelling enough to get optioned by a studio, but along the way too many hands got into the creative cookie jar and the proper funding got pulled, which is why Andrew McCarthy ended up as the main star in the low budget film that went right to video.

The premise involves $1 million in stolen casino money that ends up in a Vegas cabbie's possession. A multi-state chase ensues because the cabbie is crafty and manages to evade mafia hitmen on multiple instances. At one point the cabbie is captured at LAX and tortured by a local freelance hitman, who shoves the cabbie's feet inserted into a tub of scalding water. The third degree burns will surely slow down the cabbie right? But like a bumbling Bond villain, the bad guy unties the cabbie and lets him wither in pain on a couch (unbound), while the torturer falls asleep. Guess who gets away? Cabbie ends up in a hospital and bribes a hot nurse to help treat him at a hotel room. Hot sex ensues. Oh, and the cabbie eventually kills the mafia hitman and escapes to a tropical climate with the hot nurse.