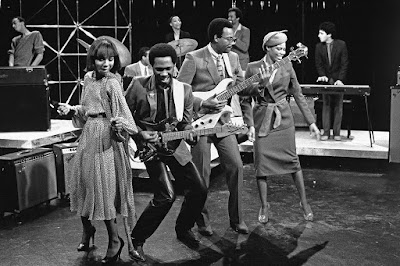 Le Freak: An Upside Down Story of Family, Disco, and Destiny by Nile Rodgers

Nile Rodgers is best known for being the co-founder of Chic, but he authored a fun memoir titled Le Freak: An Upside Down Story of Family, Disco, and Destiny. You've heard all of his disco funk hits on the radio, at weddings, and in commercials. Rodgers played guitar, but he created the infectious bass line from Good Times. The kids today might know Rodgers from his guitar licks on Get Lucky by Daft Punk.You might have heard it the first time in Rapper's Delight (like I did), but Rodgers' riffs have been lifted and ripped off more times than anyone could count. When disco's popularity fizzled out after the Disco Sucks phase swept America, Rodgers' band Chic was done. But he remained a steady forced as a producer. Rodgers produced hits for some of the biggest stars in the 1980s... Diana Ross, David Bowie, Madonna, INXS, Duran Duran, and the B-52s.

The first part of the book delves into Rodgers' strange childhood that was split between NYC and LA. His mom was a teenager when she birthed him and his step-father was a white/Jewish junkie that hung around the 1950s jazz scene. He paints pictures of a strange yet normal to him childhood that includes watching lots of television at all hours while surrounded by passed out junkies, who nodded off while visiting his mom and step-dad.

Rodgers had some amazing coincidental experiences while he lived in LA with his grandmother. As a teenager cleaned planes at a private airport in the Valley and met Frank Sinatra. In another story, while going to see some music at a talent show, he met some hippies and they invited him to a party in the Hollywood Hills that was thrown by Timothy Leary and fueled by Owsley's acid. Rodgers got a mega-dose and stayed up in the Hills for a couple of days while he partied and huge put with all these random hippies.

By the late 60s as teenager, an all hippied-out Rodgers lived in the Village in NYC. He spent time at various crash pads with heiresses and even hung out with the Black Panthers. All the while, he constantly played guitar. When the 1970s hit, Rodgers formed a band with his bass-playing buddy Bernard Edwards. They created a special technique to writing songs in Chic that involved a "deep hidden meaning." That was the key to his success during the peak of the disco years. He used it with Chic and later on used it as a blueprint for the artists he produced in the 1980s.


Rodgers told some interesting stories involving Madonna and David Bowie. The story about meeting Bowie itself is a classic. Rodgers was partying hard with Billy Idol when they went to a club in NYC. In the corner, Bowie sat by himself. A shitfaced Billy Idol screamed, "Bloody hell, that's David Fucking Bowie!" Then he ran to the bath and puked his guts out.

Rodgers was an admitted alkie and cokehead. The 70s and 80s were coke-fueled. I could only imagine how crazy those Chic sessions were. He got sober, which he admitted helped save his life because things had gotten out of control. The music industry, especially in the 70s-80s destroyed many creative people that couldn't handle the influx of money, fame, and drugs. And when the money and fame started to fizzle out, the drugs and booze got more intense. Rodgers is one of the rare survivors and he lived to tell his tale.

Quick read. I think I finished Le Freak in two settings. I probably could have read it all in one sitting, but I took time out to play different shit on YouTube that I looked up after Rodgers would reference one of his inspirations or a track he produced. 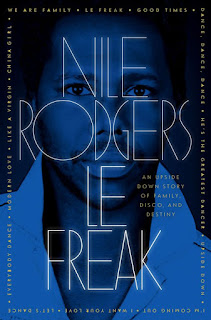