Quickie Book Reviews: The Sun and The Moon and The Rolling Stones 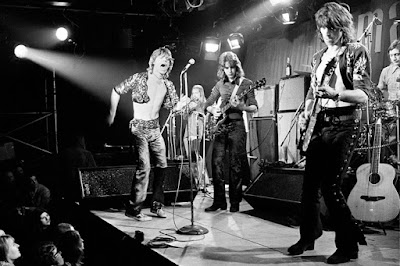 Rich Cohen got one of my dream assignments. Rolling Stone (ahem, Jann Wenner) sent Cohen on the road with the Rolling Stones to cover their tour. The bulk of Cohen's book focuses on a tour he embarked with in 1994 that included getting a behind-the-scenes glimpse at their practices/rehearsals leading up to their massive tour through North America.

If you dig the Stones, then Cohen's book is a nice and hazy walk down memory lane. Cohen gets a lot of candid quotes from Jagger and Richards at a time when they smoothed over their antagonism for each other and got the show back on the road... even after the shit that Richards wrote in his epic book, Life, that said some pretty nasty shit about Jagger.

Sometimes the sentences would get too rambling (this coming from me, of course), but Cohen packs lot of into into his chapters. And the Keith Richards idol worship is out of hand. I mean, Cohen has the hugest man-crush on Richards it definitely slants his view of the Stones' universe, like dismissing Brian Jones as a total druggie.

Supposedly Charlie Watts took a liking to Cohen during his time with the band. That's super rare according to Richards, who remarked that Watts generally hated all journalists -- especially music journalists -- but for some reason he really liked Cohen. Too bad Cohen did not delve a little deeper into the story of Watts. Volumes of books have been written on the Stones, especially Mick Jagger. Even Keith Richards and Bill Wyman penned memoirs. But Watts never really said much.

Cohen wrote from Rolling Stone mag for many years. He later on collaborated with Jagger and Martin Scorsese on the HBO series Vinyl. This was a solid book, but it is nowhere close to the best books ever written about the Stones such as Life by Richards, or books by Stanley Booth and Robert Greenfield.

I read The Sun and The Moon and The Rolling Stones in two or three sittings over a weekend, while cranking various albums (from the peak years with Mick Taylor)... Sticky Fingers, Let It Bleed, and Exile on Main Street... The holy trinity of Stones' albums.