I spent the majority of the last three days focused on writing and blew off a tempting invitation for a spontaneous sojourn to the once-cool-but-now-overrun-by-hispters Hamptons. Although Las Vegas was a huge pool of inspiration, my writing sessions were either indolent or frenetic. I was desperate to get back into my old New York writing groove. I turned off the cellphone. I avoided the TV. I kept myself hidden away from the rest of society while I wrote for hours on end. On Friday, I completed a freelance article. On Saturday, I published the most recent issue of Truckin'. Late Saturday and most of Sunday, I focused on completing a book proposal. I even skipped out on watching Paris Hilton on Saturday Night Live to write. Right now the fucker is 12,499 words long and is 46 pages (double-spaced). It still needs a lot of work. 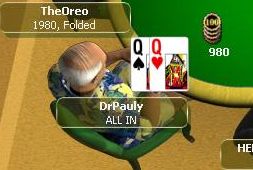 I also spent a ton of time cleaning up shit on my hard drive, desktop, and uncluttering my email boxes. I got one account down from 233 to 41. That took five hours and I still have several unanswered emails. I also finally read everything that I had in my bloglines folder. If you don't maintain that everyday, shit builds up.

For some unexplained reason I got two nosebleeds this weekend. At the same time, a chupacabra was caught in Texas. Coincidence?

During my few breaks, I watched a little baseball with my brother. The Yankees are fun to follow when they win, especially with their lack of pitching. We even watched some of the Little League World Series. It was Curacao versus Hawaii and the kids from Hawaii won in extra innings. I'd love to cover that event one year. I also caught a glimpse of the Jets for the first time too this year. Man, football season is just around the corner. Derek also taped the latest episode of the WSOP... the Efro one. I never saw it, and he said that I was spotted several times during the second half of that episode. We strained our eyes to find me in the distance. Even Derek was spotted sitting in the stands for that event.

Grubby called me from Las Vegas. He was playing in a blackjack tournament and it was being taped. But he didn't know what it was for or what channel it was going to be on. Heh.

Of course when I played poker online, I got to listen to some kick ass tunes, something I missed doing when I was in Las Vegas.

Joaquin wants to play in a club downtown this week. Derek and I might meet him out. I expect to play some MTTs on Noble Poker and have several hit and run sessions on Party Poker as well. I have a few freelance articles due and will be working on the book and refining the book proposal. With less than two weeks before I hit the road, I got a busy week ahead of me.
by Pauly at 8/29/2005 09:02:00 AM