A couple of weeks ago, Showcase asked me if he could use our apartment to shoot scenes in an indie short film about online dating that he was working on with some friends. The cinematographer was our neighbor and actually lived upstairs. The director specifically wanted to use my office for a couple of scenes. I originally said yes because I thought I was going to be in Las Vegas playing in Dream Team Poker during the shoot. Plus, Showcase was floating on air after discovering that his Bud Light commercial garnered serious air play during March Madness hoops games and even during Saturday Night Live.

I got the dates wrong. The shoot was this weekend instead of last weekend... a horrible day because I was behind deadline on Lost Vegas and the Final Four games came on Saturday afternoon (on the left coast).

Alas, the apartment was locked up for the shoot so I juggled my schedule to accommodate everyone. All for the sake of art. The motion picture business is a sham and the big studios crank out watered down piece of shit after piece of shit. However, there are thousands and thousands of talent artistic types working in different fields around town. That's the part of L.A. that I'm attracted to... not the vain douchebags and attention-craved starlets... but the professionals in their individual fields.

Loaning our apartment for a location shoot was cool enough to know that I could help facilitate the creative process. The film that Showcase was shooting had the slimmest of budgets (um, none and most likely funded on someone's credit cards...) and won't go anywhere except end up YouTube. But that's what was great about the project... done for the sheer love of doing it... and they had my full fledged support so much so that I'd give up my working space during the homestretch of the Vegas book.

On Friday afternoon, Showcase and the director stopped by for a bit to discuss the scenes. Before they left, Showcase said, "Oh, by the way, Pauly, do you want to be in the film? You get one line. 'Hey! Fuck you, lady!'"

Nicky looked and me and excitedly nodded.

"Awesome," said the director. "You'll be great for the part."

Quite a shocker that I landed a small role in the film. A speaking part nonetheless.

"Actors go years waiting to land a bit role in any film," gushed Nicky. "And you got offered a part in between bong hits."

Nicky was exaggerating about the bong hits. I was actually in my office deep into writing Chapter 50 when there was a knock on the door and Showcase and the director asked to check out the room.

When everyone left, I tweeted the good news. I got plenty of advice from thespian friends and other folks in the entertainment industry.

"Stand on your mark. Say your lines. That's all there is to acting," said Johnny Hughes.

I practiced my line all night long. "Hey! Fuck you, lady!"

We crashed early on Friday night because the crew would be arriving around 9am. Early meant before dawn. Mac the cinematographer and the director arrived first to discuss the shots and the lighting. The moved stuff around before the actress/set designer arrived with a big Target bag filled of pink stuff to make my office seem more... feminine. Lots of pink. Feather boas. Pillows. Pink.

The cool part? They added a few of my paintings and kept a Phish Las Vegas poster in the shot.

Nicky and I left the 'set' and drove to O'Groats for breakfast to let everyone work in private. I was surprised that we were seated as soon as we walked inside. We usually avoided O'Groats on the weekends because there was always a lengthy wait. One of the rare positive aspects about the Great Depression is the ability to get tables without a reservation or waiting a long time at popular restaurants around Los Angeles.

We were seated right away and four tables encircled us. Two tables contained dads in polo shirts and hats bonding with their kids and eating Saturday breakfast while Mommy slept in or went to her botox appointment. The other table had a quartet of very fabulous guys enjoying brunch and across from them were their complete opposites... two middle-aged guys in baseball jerseys with magazines and printouts discussing their upcoming fantasy baseball draft.

Nicky and I returned to the apartment and the crew were ahead of schedule. We caught the actress filming the last bits of a scene. Weird seeing an attractive actress sit at the same Ikea desk where I have been writing Lost Vegas. 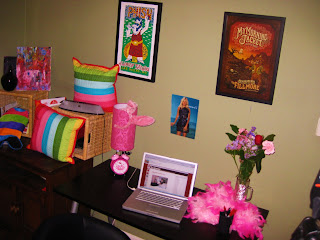 I smoked a couple of bong hits and played online poker while I waited to shoot my scene.

We walked outside in front of our apartment and he quickly discussed the scene on the palm tree lined street in the slums of Beverly Hills where the actress almost hits me with her car and I was supposed to slam my hand on her hood as she speeds away and I shout, "Hey! Fuck you lady!"

Yes, there was a minor stunt involved, which made the scene even cooler. The actress drove her actual car and the back seat was cluttered with her head shots and empty Starbucks cups.

The plan? Shoot the scene twice in a row. The actress drove her car around the block. Mac the cinematographer sat in the passenger seat and filmed the scene, while director sat in the backseat. When the car approached, I was supposed to jump out and pretend to get hit by the car. Mac shot part of the scene using the passenger side rear view mirror.

The actress drove off and I walked over to my mark as a tinge of panic descended over me. I didn't really give a shit about how I looked, but I didn't want to fuck up the scene for the crew and complicate matters. I unleashed couple of jumping jacks to shake off the nerves and I gazed up to the Hollywood hills.

The car slowly approached. My heart raced and I jumped out. I made sure that she didn't drive over my foot. I slammed my hand on the hood and screamed my line.

The car sped away. A group of three people stood in front of the house across the street looked horrified.

I smiled. My chops worked.

"I'm totally OK. We're shooting a film. How did it look?"

Two minutes passed and the actress drove down the street a second time. I jumped out, slammed my hand on the hood, and screamed my line. Nicky said that she heard me shouting from inside our apartment.

They parked the car and Mac quickly played back both scenes for the director.

"Let's get one more and we're gonna drive slower this time," said the director. "Jump up and down like she ran over your foot. More arm waving."

I returned to my position and they drove around the block. When she got close, I jumped out, slammed my hand on the hood, screamed my line and faked the foot injury.

I nailed the scene on 3rd take. Acting debut completed.

I returned to playing online poker in the living room as they finished up the last scene. They quickly rushed out of the apartment in order to shoot a scene at another location in West Hollywood and they left behind the gun for the final scene.
by Pauly at 4/05/2009 11:45:00 AM