I remember it as an innocent time, yet it marked the point when the tumultuous 1970s ended and the decadent 1980s were ushered in. 1979 was the pre-cable TV and pre-video game era. (I would get an Atari a few months later for Christmas). We had five or six TV channels on a TV set that was wooden and the size of two washer machines.

My parents listened to a lot of radio; my dad was a news junkie and played 1010 WINS in the mornings. Their tag line was "Give us twenty-two minutes, and we'll give you the world." That's how I learned about current events like the Russians invading Afghanistan and the Iranian hostages. Little did I know that those sound bytes from foreign correspondents (with impeccable British accents) would help shape my path as a writer. And my mother used to listen to CBS radio which aired popular music from the 1960s, which we referred to as "oldies" music even in 1979. That was were I got my musical primer with Motown legends, Simon & Garfunkel, the Beatles, and Bob Dylan. It wasn't until I sat down to write this post when I realized that exposure to the radio heavily influenced my life in a very positive manner.

We had a rotary phone cemented into the wall of the kitchen. A long chord, that was always tangled up, was able to reach into three different rooms of our apartment. I have memories of trying to jump over the outstretch phone chord as my mom chain-smoked and chatted on the phone in the living room. I had no concept of an "area code" and our phone number began with two letters followed by five numbers.

Things seemed so... simple. But of course, life is never that simple, even when you're feeling a bit nostalgic and re-living life through rose colored glasses.

The late 1970s was a dismal time for the city of New York. The city itself was bankrupt. The subways only cost fifty cents, but they were dilapidated, covered in heinous graffiti, and rife with crime. Parts of Harlem, the south Bronx, and Brooklyn resembled Germany in 1945 after we bombed the hell out of it. Cops were corrupt. Politicians were more corrupt. The mob kept order in the city. You were more afraid of pissing off the wiseguys than getting in trouble with the police. Times Square was a cesspool of filth; junkies, whores, queers, hustlers. Well, that I kind of miss. After Rudy G took control of the city in the 1990s, he cleaned it up and now it's the center of corporate shilling for the industrial-entertainment-media-complex.

This photo was taken thirty years ago during my birthday party at McDonalds. If you can't tell, I'm the kid in the front with the striped shirt. 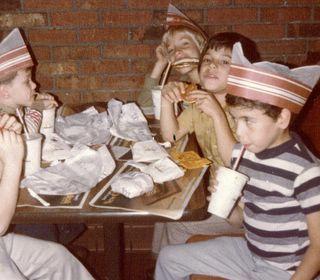 One of my parent's first huge fights occurred a few hours before the above photo was taken. They followed each other through the apartment screaming at the top of their lungs. My parents weren't even speaking to each other when my party started at McDonalds. That was probably the beginning of the end for them and I'm surprised that their marriage lasted as long as it did.

Everyone from my class attended, even the kid from the Dominican Republic who didn't speak English got an invite. Things seem so simple when you're in the second grade. I wanted to be a stunt man and crash cars and jump off of buildings for movies and TV shows. I never imagined that thirty years later I would actually live in the shadows of the hills of Hollywood with a beautiful woman and earn my living in the entertainment industry. Yes, I know, I'm the lowest rung on the entertainment ladder as a poker writer, but I can pay my bills doing something I enjoy so I'm very happy about that prospect.

I wish I could go back in time and tell the younger version of myself that someday I'll get paid a shit load of money to write stories about adults playing video games. I'd also tell myself to watch less TV, read more books, and don't stress out about women.

Back to the above photo...

The kid on the left was one of six kids in an Irish family and his dad was a cop. No shocker, there. It was weird that my dad was one of the only Irish dads in my grammar school who was not a cop or fireman. The kids teased me that my dad didn't get to carry a gun to work because he was a suit at an big-time insurance company in midtown Manhattan. Little did they know that suits in insurance companies would be responsible for some of the most heinous crimes against humanity.

Both kids on the right are Italian. One kid's dad had a store in the neighborhood that laundered money for the mob. The other kid's dad was a fireman who worked nights so he was always sleeping during the days.

Guess which kid spent a stint in prison in his early 20s?

Guess which kid had a serious bout with cancer? I wonder if he's still alive to this day.

I stopped talking to the kids in the picture after I graduated from Catholic grammar school in the Bronx and went to high school in Manhattan during the end of the 1980s. Talk about the collision of two eras. No wonder us kids from Generation X were so.... jaded.
by Pauly at 9/20/2009 04:20:00 AM