It's Bob Dylan's birthday. Here's a nifty remix of a classic Dylan song with a lil modern rhythm section.


The older I get, the deeper I dive into Dylan's archives. It's been a fun last few months exploring early 80s Dylan when the entire music world had pretty much written him off. It was a rough transition, yet Dylan someone survived the tumultuous 80s and one again re-invented himself just in time for the rocking 90s.

In 2011, I nearly died in a car accident. A couple of days later, I sat tenth row of a Dylan concert in Las Vegas. My pal Jesse May is a huge Dylan disciple and scored us the sweet tickets. Amazing sound at Pearl (at Palms). Dylan was perfect in the mix, so he didn't have a typical voice like "sand and glue" or like he was singing with marbles in his mouth. Most of the (older) crowd sat... except Jesse who rocked out the entire show in a pink suit and headband and doublefisting two cocktails... but I was in so much physical pain and jacked up on painkillers that I sat down too. Rocking out in my chair. 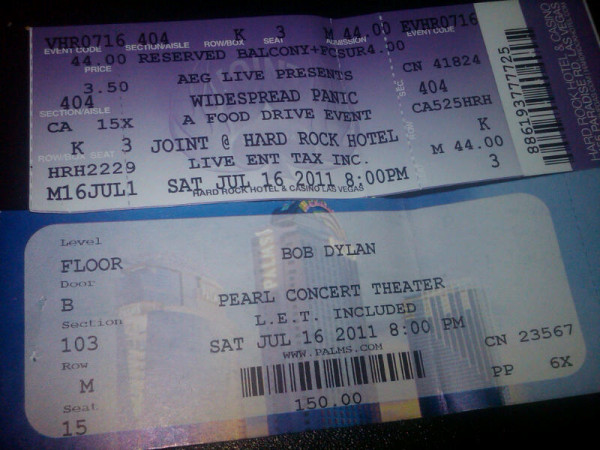 I was as close as I'll ever be to the man and I had one of those moments in life -- and they don't have very often, which is what makes them so monumental -- but I had one of those moments that I was so damn happy to be alive.... period. Want to talk about fully being in the moment? Well that 75 minutes with Dylan was just that. I was reborn in many ways that are indescribable and Dylan was a tremendous part of that transformation. I knew it was time for me to move on with my life. The Vegas and poker chapters were done, and it was time to start with something new. Inspired by Dylan's clear message, the emotions he stirred up inside me became a chain reaction, which in turn became the necessary fuel I needed to begin a new journey.

Man, I got to see Bob Dylan play for what could be the last time for me (my girlfriend and I actually saw Dylan last year at the Hollywood Bowl, but it was a meh show compared to blistering Vegas performance)... you never know when he'll hang it up and stop touring... so that evening was sheer bonus. Gravy. Lots of gravy. Every morning I thank God (or the Creator, or the Universe) for a second chance at life. But more importantly, I frequently go back to that Dylan show in Vegas with Jesse May.