It was one of those blurry nights when I was up until 6am even though I popped a few painkillers around 2am. With my iPod on shuffle in the background, I had been chasing a loss for most of the night, which in poker terms is worse than chasing the dragon. I'm stuck 300-400 playing online poker since the month started and about 23% of those losses are due to my own stupidity. Just when I think I'm a decent poker player, reality grazes me in the nut sack. 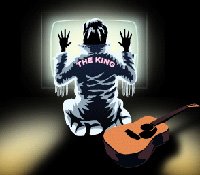 My mind has been on hyper-active mode the past two weeks. When I slip into hard-core writing mode, it's hard to get my brain waves to stop racing. I had a goal to crank out 10-12 articles and I'm on pace to do that by Sunday. I desperately need sleeping aids to crash because all the internal chatter keeps me up. I want to stock up on a few nights of decent sleep in before I go to Tennessee and party like a rock star and sleep like seven hours inside of a week. I picked last night to take some painkillers, but instead of making me sleepy, they made me feel all warm and fuzzy inside. The last thing I wanted to do was kill the high, so I stayed up. I wrote a little bit and read the Paris Review Book, in particular a piece from Malcom Lowry.

I spoke to Change100 for a while late night. I needed to lift her spirits after she had to go to the ER on Wednesday night after a nasty spill in her local drug store. She split open her elbow and had to get stitches. She told me she's suing the chain. I joked that she might get a new car out of this ordeal. I wondered if it would affect her Bonnaroo performance and she assured me that she'll be able to party it up without any probelms. At least Showcase is around to take care of her, feeding her Vicodins and medicinal marijuana.

Man, the Bonnaroo music festival starts in six days and it couldn't come sooner. I've been waiting for this trip all year ever since The Joker and I made plans to go. I recall sending him the announcement in an email and he quickly replied back, "We're going!"

We didn't have to discuss the details. We bought tickets, made hotel and car reservations, then got flights. It was a no brainer. Then we added some special guests like professional Keno player Neil Fontenot. Plus, the perpetually stoned Change100 said she was in, then Molly got a ticket to Bonnaroo for graduation. We now have a great crew and at least three of us write for my music blog.

A week from today, I get to sample some Phishy music at Bonnaroo. Sure Phish has been broken up for almost two years, but their bass player Mike Gordon is playing country tunes with Ramble Dove next Friday afternoon. Then later in the day, Trey (Phish's guitar player) will be playing with one of his side projects, Oysterhead, which is a trio made up of himself, Stewart Copeland (drummer from The Police), and Les Claypool (bass player from Primus). They have not played in a few years and I've caught a few Oysterhead shows including their first ever gig at Jazz Fest several years ago. Oysterhead is like a superband.

Indie rockers Cat Power are performing with the Memphis Rhythm Band so that should be interesting. I saw Cat Power for the first time at a dive bar in Williamsburg like five years ago. They played a gig here in NYC recently, but I skipped it. Trey Anastasio Band is opening for Tom Petty at selected shows this summer, so I wonder if he'll sit in for a few songs during Petty's set. I'm really stoked to see My Morning Jacket who plays the late night show. Things get freaky during late nights at Bonnaroo. That's when all the amatuers go to bed and all the professional partiers kick it in to high gear. I've never seen MMJ before. I've heard several bootlegs and I like what I've heard so far. Lori caught them last year at Bonnaroo and said they tore it up.

Seriously, all this music happens in just a brief period of time and I can't wait. That's what's great about these music festivals... seeing a ton of music with your friends. This is my gift to myself for busting my ass all year.

I found out that the Vegoose music festival is going to happen again this year around Halloween in Las Vegas. Bands that are going to be playing at Vegoose never go to Vegas, so it's nice to have that opportunity to see them in cool venues. The Joker and I had a blast last year and I really want to go back. He had fun dressing up like the UPS guy and I went as Dr. Pauly. Widespread Panic's Halloween show was by far the highlight of last year's Vegoose. I have not been a room with so many wasted people in a very long time. The Flaming Lips and Beck kicked ass during their Vegoose sets too. I might have to postpone my trip to Asia by a few weeks so I can take in Vegoose for a second year in a row.

I woke up super late today compared to the rest of the week. I had been getting up by 7am and writing within an hour. By noon, I'd have at least one article done and made a few business phone calls. I woke up at 11am today very groggy and starving. I stayed in bed for twenty-seven minutes and listened to WFUV aka Fordham U radio. They played Beth Orton, The Wood Brothers, REM, Aaron Neville, Essex Green, and Jack Johnson.

Still sleepy, I threw on a hat and pants and went down to the corner for a bagel and iced tea. Now, I'm ready to edit an article I worked on yesterday. Plus I have to finish off my Born to Gamble series over at the Tao of Poker. That's been fun to write, but mentally draining. I'm glad it's almost over.

Thanks to AlCantHang for linking up some of the sites/blogs that Derek and I write on!