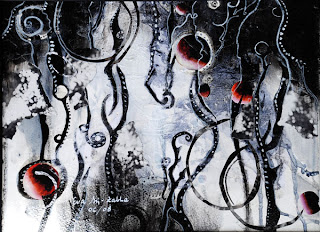 I used to have two modes... switches, gear shifts, or whatever you want to call it. Those two modes were: living and writing. These days I have three: living, thinking, and writing. Most of 2012 was what I would call a deluge of deep thought during a thinking phase because for the first time in a decade, I wrote less than I had ever before and even published fewer things on the web (save for the fact freelance material I was paid to do and twenty or so Phish concert reviews). Yeah, if you're just like me and hate mostly everything I write, then we were both spared from logorrhea last year.

Alas, 2013 is a new year and I'm back to drowning myself in word shit after taking an extended break in San Francisco to think while I wandered the streets, rode buses, sat in parks, slumped in cafes whacked-out wasted and studying hipsters in their natural habitat. Now that I had some time to think about life and re-think new goals as a writer, it's time to get off my ass write (for play and for work, mostly work) for a while before I head back on the road in the summer and start living hard again.

For most of my 30s, I jumped back and forth between extended periods of living/writing. When I wasn't living, I was bogged down writing about it trying to remember everything crazy that happened. That's why Tao of Pauly (immensely valuable electronic notebook), other blogs, Twitter, pictures, notebooks, ticket stubs, and whatever mementos I accumulated (hotel room key, receipt, trinket, matchbook) to help me reconstruct a specific moment so I can write about it at a future date. The memory is fickle and the older you get, you struggle to recapture those memories. What was once vivid and clear in technicolor, has become fuzzy and soaked in sepia.

The memory is dangerous because it is something that allows people to hold grudges, and it allows people to let things go. The memory makes you nostalgic, but often for the wrong reasons, and doesn't allow you to evolve. The memory can be a pain in the ass, or a trickster. For most of my life, my own mother mixed up my name with my brother's and vice versa. Maybe it was the booze, maybe it was the mischievous memory fucking with her.

Sometimes it's impossible to figure out where your car keys are located, or what's the password for a random website, yet it takes the littlest things to jog the memory and give you instant flashbacks.

Music is one of the most powerful things to evoke a feeling or recreate a memory. It's why teenagers get even more angry or sad by listening to the same emotional song over and over and over again. It's why directors (e.g. early Marty Scorsese, PT Anderson, Tarantino) pick the perfect song to add more depth to a scene to help convey a particular mood in a film (e.g. Scorsese's use of the piano solo in Layla during Goodfellas as the cops find the corpses all the dead mob guys).

I rely on music as a necessary tool to write. The most popular usage is background music to drown out any potential distractions. I have that specifically in the early mornings in Los Angeles to keep me sane from losing my shit from all of the leaf blowers or construction. When I covered the WSOP in Vegas, and sat in a pressbox for seven weeks inside of a casino's convention hall, I made sure I had noise-cancelling headphones and a series of playlists to help block out everything.

Sometimes I listen to a specific set of songs/musicians to get me in the mood to write about a certain subject. In the mornings, I opt for jazz because it's low maintenance. I don't ever have to worry about getting hooked by a catchy sequence or have lyrics interrupt my train of thought.

Around the turn of the century (pre-iPod), for writing sessions I sought out five albums to load them in my CD player, but these CDs were full albums I could listen to from start to finish without wanting to skip over anything. You know how impossible it is to find a flawless album? Even the best albums had a few weak spots because it's really impossible to find a perfect album with as few lyrics/vocals as possible from start to finish? As much as I enjoyed Blue Train or Kind of Blue or Monk's Dream, I had grown tired of those CDs. But those two of those three classic jazz albums were perpetually inside my 5-disc changer. Yeah, I struggled to find two or three decent albums of background music, but then try to find 5? or how about 10 to keep things fresh? After a while, the playlist got stale and I struggled to find a new batch of inspiring albums.

Thankfully the technology improved and I got my first Macbook in 2002. iTunes helped solve my music problems and I took advantage of playlists. No more struggles searching for complete albums to write to. I had playlists. Hundreds of them. Over a decade later, I burned through a half dozen laptops and created almost a thousand playlists.

Whenever I worked on larger projects, I relied upon specific playlists to get me in the right frame of mood to write. For example, I've told anyone who asked that I wrote (and re-wrote and edited) the final chapter of Lost Vegas while listening to Tumbling Dice by The Rolling Stones. Just when I thought I was struggling with the final edit of book, Phish played that exact song on Halloween in 2009. I took that as a positive sign and it really fired me to finish the book on a strong note.

I spend mostly every morning listening to jazz music. Enthusiasts and hardcore jazz geeks uploaded entire ablums onto YouTube. I know, it's weird... YouTube is a video platform, but it's an awesome place to listen to almost any song for free. Just type any song from your teenage years into the search... "Dead Milkmen, Debbie Gibson Is Pregnant"... and viola! I spent plenty of late nights with Nicky looking up old music videos from MTV's heyday in the 80s.

Anyway, I found hundreds of old jazz albums on YouTube... no video, just the audio. The sound quality is sub-par, but I decided to buy my favorite ones via iTunes to acquire higher quality recordings. In the process, I created a playlist of entire jazz albums. Several of them had become writing music staples over the last decade or so (like Headhunters or Milestones or The Sidewinder). Instead of using iTunes, I can fire up YouTube and play a bunch in the background. A couple of weeks ago, I created a jazz writing music playlist. Every few days I add another new album to the list and it's slowly growing.

I'm lucky. I have a great group of friends who recommend new music and bands through a daily email thread or someone is passing off a new batch of tunes on Dropbox. The key to discovering good music (both old and new) is to rely on your friends, so find a core group of eclectic people (bonus if they're musicians, but any artsy types will do) whom you trust and then be very open to what they have to share.

Music lovers have always been stuck up about what they think is good or bad. Unfortunately those arbiters of taste are biased and often have auditory tunnel vision. It seems that during my journey through life, the more pretentious someone is abut music, the less they know. That's why it's important to have different avenues to explore music. The internet has made music more non-popular available to the masses than ever before. Combined with technology, music fans have been able to streamline specific content to create your own playlists (mixes or genres) for yourself or to share.

Over the last decade, the internet has become a bastion for passing along really shitty music. In the early days of music blogs, (I blame tech-geek hipsters for infiltrating the music scene) there was a race to pass along the most obscure indie bands. That mentality has trickled down into social media, so it's difficult to get anything of substance. Sure, you might find a gem in that pile of cow dung, but there's too much crap out there. The positive part about music and the intent, is that slew of online communities sprang up and became a valuable source to discovering new bands or connecting with like-minded people.

That's why your friends are important, especially if they are musicians and understand the difficult process at expressing yourself but making it palatable for the masses. They are like lab rats who try out a new wonder drug and croak or grow a third testicle. They'll sample the music and know your kind of tastes so they can cater their recommendations. These days there's so many diverse genres that most of them sound made up (e.g. glitch hop, Nu-disco).

Looking at my inbox over the last week, I'm fortunate for the Coventry crew (Joker, Jonas, and BTreotch, Broseph) continuously turning me onto new music I would have dismissed or never even knew existed. Most of the time, I'm super busy with work (aren't we all?), so I don't have chunks of free time to explore as much new music as I'd like, so I naturally gravitate to what I know and like. I devote any free time to reading, but music is a close second. You have to make time for music. It truly soothes the soul.

When I grew up, my original musical tastes were shaped by the radio and later TV. If my mother did not play old Motown records and listen to the Beatles (they were staples on the oldies stations), I would have never had that as a musical base and would have been stuck listening to nonstop rap. Like most of the kids from the 80s, I cherry-picked the coolest stuff from the radio. These days, I do not rely on corporate owned radio stations to determine what is cool and not. I also never listen to the radio in the car, so that's why I have no idea who are the current pop stars. I don't pay attention to what the music machine is forcing down the throats of America's youth. I never relied on MTV (wait do they even have videos anymore? the station has become reality TV catered at pre-teens and teens) to curtail my tastes, even though cable TV in the 80s-90s allowed the record industry as an alternative means to get youth hooked on bands through catchy visual cues and videos. The migration from radio to cable shifted after the tech boom. I don't rely on indie music blogs to give me clues on what I need to be listening to. And like anything on social media, you have to figure out which people's feeds cater to your needs/attention the best, that way you can follow who can turn you onto some new/old stuff.

Over the weekend, Nicky and I got our hands on an advanced copy of Amok, from Thom Yorke's side project Atoms for Peace. During my aimless web wanderings, I came across  Chuck Norris, Bitch! mix, which was the latest in a series of mixes (Motown, French pop, surf guitar, and soul) inspired by 60s exploitation films. Oh my... blending genres and nostalgia. Good shit.
by Pauly at 2/19/2013 02:22:00 PM