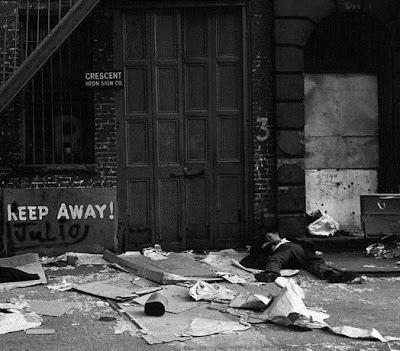 1958. Louis needed to find a new drummer. He made a list with a pencil and scribbled down four names. He walked down to the bar, ordered a beer from Jimmy, scooped up changed, and retreated to the bank of phones. Dexter was his first call.

Sid emerged from a month-long bender. He was more gaunt than usual. Leathery rings swirled around his sunken sockets, but his attentive eyes were swimming in eagerness. Sid begged to book studio time. Louis advanced Sid at least three albums worth of money, which he blew paying off debts to other musicians. Louis didn't care about that. He was happy for a chance to get a full day of recording, maybe even two? He didn't want to push his luck.

Sid materialized. Out of thin air. The last anyone saw him was a sweltering Indian summer night in September. Then he vanished. Melted into the shadows. Gone. Months. Months. Months. Louis hoped Sid would stick around long enough to scratch together material for an album. If it was halfway decent and 5% as good as his stuff from 51-52, then Louis would more than make his money back and then some.

Sid showed up with four feverish compositions. He had to have Philly Joe on drums for the session. But in doing so, Philly Joe would have to miss a gig at the new club in Jersey. Everyone knew the mafia owned that club in Hoboken. It was going to be packed with mafia types and their girlfriends. Louis didn't wanted to piss off the owner when they found out that his record label stole their star drummer. It really should not had been Louis' responsibility per se. Sid should have shouldered the burden to find a replacement but he pushed off the task onto Louis.

The tiniest things sent temperamental Sid into a fury and he'd fight with the engineer or storm out of the studio and that would be that. Louis struggled to get Sid to sit down and record over the last two years. Anything. Even if he was playing Egyptian scales and farting. At least it would be something. But dealing with Sid was like juggling flaming swords while standing on eggshells with a hot poker shoved up your ass.

Their disastrous last session was typical Sid. It should have been a single afternoon, but it was stretched out over five painful days. Something always got fucked up. On Monday, a lazy bass player got fired on the spot for fumbling the chorus... Tuesday, a strung out sax player passed out in the toilet and caused a ruckus with the janitor... Wednesday, one of Sid's crazy ex-girlfriend showing up at the studio with a dagger... Thursday, everything was finally on track before Sid made them do a seventh take, which irked the drummer who was late for a gig. Sid stormed out of the studio... Friday, everyone showed up... except Sid.

Critics said he was washed up. Club owners said he was an unreliable druggie. Dealers said he burned them for hundreds of dollars. His peers thought Sid was mediocre, at best, as a trumpeter, but he was a stunning composer. Ahead of his time. Canonball called him a jigsaw puzzle with all the outside pieces missing. Every time he self-medicated, another piece of his puzzle eroded.

Sid poached Philly Joe from Dexter's band. It's a jazz taboo to steal another bandleader's players without talking to the head honcho first. Sid never bothered to call Dexter. That was his first infraction. He did even have the decency to find a replacement, or at the least, recommend someone competent for the job. That was his second infraction. Sid always did things his way, which is why he butted heads with almost everyone in the music biz on the island of Manhattan from the tip of Inwood all the way down to Chinatown.

Instead of Sid doing the right thing by calling around to find a new drummer for Dex, he told him tough shit.

"Fuck that junkie cat in the ear."

Louis knew Dexter pretty well when Dexter recorded a few sessions with Daddy Long Legs Sims. Dexter was an easy-going guy and would be angry for a day or so, but he'd get over it. Bands get raided all the time by ruthless club owners and other desperate band leaders. Louis' biggest concern was the Sid's cavalier attitude toward the mafia. They were some serious fuckers. Louis' uncle Howie owned a restaurant and a banquet hall in Lodi and the mafia tried to shake him down after the war. At first it was just muscle money, and he reluctantly complied with a monthly pay off. Then they wanted him to open up in the middle of the night for private parties and Salvatore DeBlasio started running an illegal casino in the back room. One night a fight broke out and the hall was destroyed. It looked like a bomb exploded. Tables, chairs, glasses... all shattered and broken. When his Uncle asked them to pay for the damages, Sal DeBlasio's sons beat him with baseball bats. They eventually took over the restaurant and gave his Uncle a stolen watch for his troubles as a retirement present. It probably came off the wrist of a murdered deadbeat dock worker who crossed the union. Louis' uncle checked out of life and became a full-time whino living on the streets. His Uncle kept the watch as a frightening memento. Why? Who knows.

Louis knew better than to piss off the wrong wiseguys, but Sid didn't care. Once Sid disappeared, you wouldn't be able to find him for days... or weeks... or months. Sid knew no one would go into the darkest alleys of city to look for him, which is what bothered Louis the most. At some point during their search, unsavory thugs would show up at Louis' recording studio looking for Sid. Louis didn't want them to smash up thousands of dollars in recording equipment when they couldn't find Sid, so he frantically called around looking to find a replacement drummer for Dexter.

When Sid didn't want to be found, he vanished. Gone. Poof! Melted into the shadows of the worst of the worst flophouses to hang out in East Harlem and the South Bronx, the forgotten alleys of ill repute where no one from the square world wanted to poke around the labyrinths of neglected buildings on the fringe of erstwhile neighborhoods and former bustling thoroughfares teaming with life, but had since fallen upon harder than hard times where ghosted haunted the streets and thieves prowled at nights and where the invisibles disappeared in plain sight.

Sid holed up on 143rd Street. Drunkards shat themselves in that tenement's doorways and you had to step over a minefield of shellacked bums to reach the dilapidated backrooms where working girls yanked, tugged, inserted, and sucked for a few bucks.

During the days, Sid gazed at cracked plaster and squashed the bugs, both real and imagined, with his thumb.

When he ran out of money for junk, Sid sniffed a rag soaked with paint thinner.

He left his trumpet with his Aunt Mary Mae on St. Nicholas Avenue and asked her to hide it, so she stashed it under her bed. Sid didn't trust himself when he was expecting an internal torrential downpour and fierce thunderstorms. He'd get incredibly dope sick and sell his instruments if he had to which is why he left them in safe keeping with his aunt. She had explicit instructions to give him back the trumpet at a gig or recording session.

Sid once made the mistake of bringing his horn with him during a bender. He thought he concealed it in a brown paper bag, but he nodded out and when he woke up from his junk-induced dream, it was gone. The bag was left behind, but the trumpet had vanished. It was like losing a family member. Or a limb. Sid cried and cried and cried. Like Ahab in search of the white whale, Sid scoured every pawn shop in the city. He never found that stolen horn. It was gone forever. He stopped the search. Chalked it up to another bad decision in life.

Sid told his bad beat story to Louis, and Louis made a warm gesture and advanced Sid some money so he could buy a new one. That was three years earlier. Sid made a vow: never again would he lose his horn during the nods. Sid made sure he left the trumpet with his Aunt Mary Mae. Safe keeping. It sat idle under her bed for almost nine months.

When Sid didn't have his trumpet, he'd close his eyes and play the notes in his head. If it was nighttime, he'd just stare off into the darkness and start playing. It was silent, save for the ambient noises of the local blight. Inside his head, Sid could hear echoes and echos of notes. Bah. Bu. Bah. Bu. Blat. Bah. Burhd. Bah. Bu. Blat. Buh. Burhd. Bah. Bu. Blat. During these trances, Sid must've run through thousands of imaginary recording sessions and thousands of gigs. He heard hundreds of versions of his new compositions tested out with dozens of musicians. He played the solos over and over and over until he got it right. He played over and over until everyone in his mind's jazz club nailed it.

Even completely strung out and dope sick, Sid figured out the perfect ensemble for each song. He settled on four tracks he wanted to record, sort of Vivaldi's Four Seasons in reverse. Instead of titling each track after a season, he wanted to call it a specific month. January. April. August. November. Sid wanted four sets of musicians for each track. A quintet for the first song, November. A quartet for the second, August. A sextet for the third, April. And a quartet for the fourth, January. He only had one or two drummers in mind. Philly Joe was one. Three of the songs couldn't work unless he had Philly Joe. He'd settle for Clarence Brown on the fourth tune, January. Maybe Clarence could mesh on April, but his Latin-style was ideal for a specific section on January. The other three were too complex for Clarence to handle. He was still a kid. Didn't have enough living in his belly. Only Philly Joe understood. Philly Joe lived hard and fast. He knew how to conjure up the melodies in his head the same way Sid enticed the notes to magically appear as floating swirls of color and wispy trails of dancing smoke.
by Pauly at 2/16/2013 02:22:00 PM