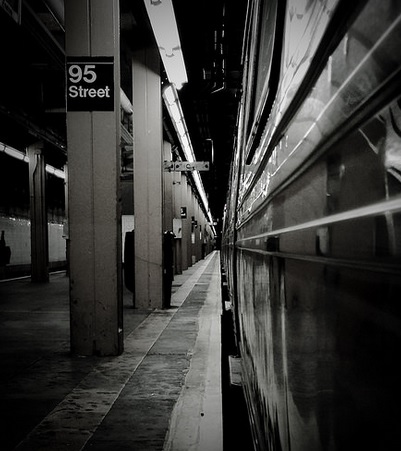 The ornate bubbles glowed. The incandescent bowl illuminated the darkness. Dream-like, yet somber. Sultry and wispy, yet sullen.

Hypnotic dripping pipes pierced the night time sounds and drowned out a low-fi Latin rumba from down the hall, hissing radiators in the stairwell, clanging gears of ancient elevators, rumbling subways, early morning sanitation trucks, and the screeching halt of gypsy cabs on Broadway.

Eerie church organ echoed in the near distance. Maybe the church doors were open. Maybe it was one of those open-air tourist buses driving through the neighborhood and cranking the organ sounds. I imagined a flatbed truck and old widow from Birmingham with flea bites on her ankles whaling away on a church organ in the back of the truck, while chain smoking like Tom Waits on a Tuesday afternoon.

You never know which relic of the past thirty years will present itself at any given moment. Chance encounters are fickle affairs. You can never prepare yourself for a casual stroll through the mental ward inside the hallways of your mind. Awkward "bump intos" in the middle of a crosswalk. Or in line at the deli. Or waiting for the elevator. Or being flagged down by the mousey woman with the glass eye. Unsuccessfully navigated a conversation with the uneasiness of a wayward stripper who was forced to give up the pole in exchange for a so-called pious life as a born-again.

Addiction swapping is a dangerous enterprise, but no one had OD'd on Jesus... yet.

That's the most dreadful part about wandering the streets of the old neighborhood. Bad enough you're ambushed by ghosts and shrapnel bursts of memories. Blasted by fragmented clips of the past. Black and white. And technicolor. None of them have any chronological order. They just appear and disappear. Jolts of light and tsunami of memories.
by Pauly at 12/28/2014 04:20:00 PM