Well I had a quick two day break before I headed back to work covering tournaments for Las Vegas and Poker Blog and Poker Player Newspaper. Flip Chip, the Poker Prof and I headed over to the Bellagio for the first day of the Bellagio Challenge Cup. It's a four day event with a $10,000 buy in. Only 95 players signed up but there were plenty of top names flinging chips around in the infamous Bellagio poker room. 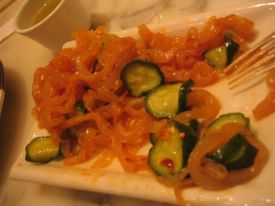 At the end of Day 1, 41 players remain in the field. I spoke to Scotty Nguyen. He told me he had $120K in chips and thinks he's about 3rd place. Tobey Maguire has $42,150 and made it to day two. Notable bustouts include John Juanda and Capt. Tom Franklin. On our way out, we spotted Phil Ivey shooting craps with John D'Agostino. He was up about $300K.

The coolest thing about covering tournaments at the Bellagio is the food comps. Unlike the cheap bastards at the Rio/Harrah's junta, the powers to be treat members of the media very well at the Bellagio. When the action was complete, quickly got three food comps and headed over to Noodles for some excellent Asian cuisine. The Poker Prof and I shared the jellyfish and cucumbers salad as an appetizer. The jellyfish made me queasy, but I had to try it once. The cucumbers were spicy. I ordered the Sesame Chicken and my portion was larger than expected. For desert I snagged the green tea ice cream, which was made from scratch on site. The Poker Prof ordered the mango pudding and it looked good.