I just sat through the WSOP press conference. They inducted two new hall of famers... Crandell Addington and Jack Binion. The Rio is a zoo. There are thousands of media folks here now. Ouch. I can write circles around all of them, so I'm not too worried. I'm more cocnerned about getting my shit stolen.

Al Cant Hang is here for a few days and I finally met Wil Wheaton. I showed him around the Rio.That was the first time we met.

Here is my latest article from Fox Sports called: Players to Watch. 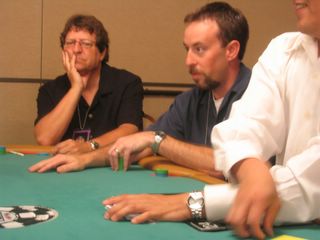 Here's who was at my first table: Otis, Touramnet Director Gary Thompson, Vegas Sun writer Sal Deflipino, the Poker Prof, Sharla from Poker Pages, and some Chicago comedian. I forgot a few of the folks there. Dan from Pokerati had James Woods to his right. Sherry had Penn at her table. She knocked Penn out.

$1500 chips to start. Blinds are 15 minute levels and they go up fast. Early on in Level 1, I had the Hilton Sisters and limped UTG. There were two raises in front of me. I moved all in and they both folded. I flipped over the Hiltons.

In Level 2, I found AQs on the button. I bet $400 and the little blind called. That was the Chicago comedian that nobody knew about. Anyway, the flop was Jack high. He bet $100 and I moved all in. He called. I said, "I'm behind." and showed my AQs. He had 10h-3h. What? He missed the flop completely. I won with ace high and knocked him out. I also doubled up. Otis lost a big pot with Kd-Qd versus pocket tens. That crippled him.

On the very next hand, I found AA! 40,000+ to 1 shot that happens. Gary had to call with 77 and some photographer guy (I think his name was Kevin) called with AKs. I knocked them both out and I had $9300. By then I had a slew of railbirds.... Al Cant Hang, Glyphic, Otis, Shirley, and everyone I knew who got knocked out. 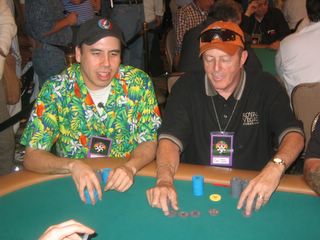 In the middle of Level 5, I got moved to David from ESPN's table. Also there were TK from Blonde Poker, Lou Krieger, and Mark from Poker Pages. Lou was seated to my left and we chatted about his trip to Alaska. Check out his kick ass dog sled pictures on his blog.

Anyway, in Level 6 and in LP I moved all in with Qs-10s. Mark called with 8-8. I had overcards and caught two spades on the flop. I rivered Mark and stacked up a mountain of chips while the railbirds cheered me on. TK raised on the button. I knew he was on a steal, especially with the accelerated blinds. He told me that he was going to fold pocket tens and flashed one ten. He then showed a 2. I flipped over As-6s. I had 27K in chips.

In Level 7, I was moved to Shannon Elizabeth's table. She had the most railbirds. I won a big hand with As-Js. I moved all in against Shannon's big blind. She thougth about it for a minute o two. And she stared me down! Yeah, I had the American Pie chick looking me up and down. She folded. At that point, I won the last longer bet. The pool was $260. Otis tossed it on the table. Score.

In Level 8, the blinds were $2K/$4K. Shannon Elizabeth moved all in. I found two black jacks and moved all in to isolate. No other callers and she flipped over pocket aces. Ouch. Everyone hooted and holelred from her entourage. I had Otis and Al and a few other bloggers cheering me on. After the flop came out, I pointed to the spot were the river card would fall. I continously pointed at it and said, "Put a Jack up right there." The turn was a blank. The river... was a Jack and the room exploded. Half the crowd was shocked and the rest were cheering for me. Shannon was wicked pissed that I rivered a two outer on her. I saw her later in the hallway and I apologized. I told her the story about Charlie and she took the bad beat a lot better after that. She told me to win it for Charlie. I had 60K in chips.

During the break, I met a guy named Jon from Wisconsin who read my blog as well. I signed my first autograph! He had Shannon Elizabeth's autograph and since I knocked her out, he wanted mine too.

I was moved to yet another table. There were 19 players left inlcuding Amy Calistri. I folded all my marginal hands. AMy bubled out and the final table was seated. I had $51K in chips and was in 3rd place. One guy at my table read my blog. Cool, huh? The blinds were $5K/$10K and the antes were $1K. Three players were busted and one guy had been running over the table. He moved all in and I made a stand with Ad-6d. He showed 8-8. I was behind and he caught a four flush. I was knocked out in 6th and won $250 for Charlie Tuttle's foundation. If I came in 1st, I would have won $10K.

So that's it. I made the final table at a WSOP and cashed. I was inspired by Charlie and all my railbirds including Glyph and Al Cant Hang. I think it's funny that the last longer bet was more than the actual prize money! 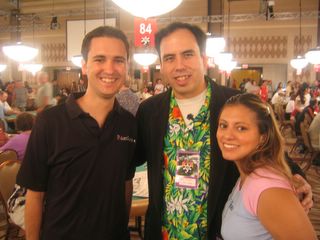