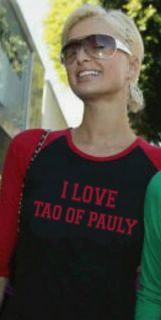 I'm back in NYC and slept the entire morning. That never happens. I call it exhaustion after a month on the road and flying NYC to Vegas twice. Got up eventually and finished up the latest issue of Truckin'. Then I wrote for a few hours.

I finally caught up on reading through everything in my bloglines folder. Even the bad blogs. Change100 posted a trip report on her blog about her few days in Las Vegas last week. I loved these excerpts, although I was extremely uncomfortable when the second part went down:

Grubby and I were seated at the same table, while Pauly played at the table behind ours. The two of them continued a weeks-long stretch of prop betting by wagering on my first drink order. Grubby won by taking the more practical choice of Red Bull and Vodka to Pauly’s Soco rocks. The Dr. was thinking with the wrong head on that one.

Not too long after he sat down, Pauly got recognized by a fan. He is, after all, somewhat of a journalistic celebrity in certain Vegas circles, not to mention a huge cult figure in Canada. Of course I had to grab a cocktail napkin and a pen and run over and ask for his autograph to tilt him a little.

I still am way behind in reading email. I seriously need an intern to do stuff like that. I read all of my snail mail which included a few Christmas cards, random magazines, a ton of sales catalouges, junk mail, casino promotions, a few bills, and not one fuckin' freelance check. I'm still waiting to get paid on a few things. I ripped up most of my mail and sorted through the random free stuff that I get like any sort of book on poker or gambling. Usually a marketing or PR person gets my name on some sort of influential media list and sends me a free copy of their client's latest book hoping I'd write a review on my blog or for one of the different organizations that publish my shit. I always think I should read them cover to cover for karmic reasons because I'm afraid that one day a PR rep will send out one of my books and some dickhead reviewer will barely skim it over a early morning shit after eating bad Indian food the night before.

I ate pizza and chicken parm heros with Derek and finally watched The OC Christmaskah episode on TiVo. I also caught some of Tournament of Champions on ESPN. I spotted some friends of mine from the poker media in a few background shots. Also watched a little football with Derek before I played in a PLO tournament on Poker Stars with Nerd and Derek. I had a few railbirds like April and Alan. I came in a disappointing 104th out of 324. Overall, I put up three winning days in a row.

I've been looking for an empty block of time to sit down, write, and avoid the world for a while to concentrate on my art for months now. I got one in early 2006. In many ways I'm putting a ton of pressure on myself. For the first time ever, I just don't have to finish a book, but it has to be fuckin' good and the best I ever wrote. Yep, I'm setting myself up to fail. Don't worry. I'll be OK. I just like to challenge myself before I start a huge project. I know I can do it. The hard part will be the next few days waiting in anticipation to write.

Robert Redford spoke about how it was important to have a place to retreat to especially during periods of hard and intense work. I don't have that unfortunately. I've been on the road most if not all of this year and haven't spent more than 80 days in one place at one time. I'm going to try to take it easy next week and read books in order to prep myself for 15 intense days of writing.