"What kind of responsible pet owner allows her dog around known drug fiends at 2am on a Saturday night in LA?" I screamed as Nicky tried to get her neighbor's dog stoned. "She's lucky we didn't eat the fuckin' dog."

Some pets like getting high but that won't deter that my blog will get flagged by PETA activists and I'll get placed on a hit list. The next time I'm in Las Vegas, a bull dyke with a bigger penis than me will jump out from the shadows and pelt me with a gallon of orange paint as soon as soon as I step one foot into the Bellagio. 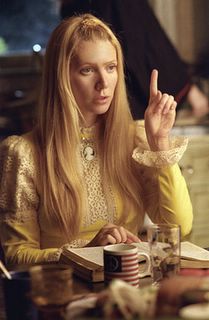 On Saturday, I went to dinner at an Italian place in Westwood called Hoboken. I ordered garlic bread with mozzarella cheese and a plate of Penne Arrabiata with pancetta and sundried tomatoes. It was spicy and yummy. Nicky ordered something off the menu since she had been going there for years. In the past I would have cleaned my plate and ate way too much bread. Thanks to my new found subdued eating habits I limited my intake and took about 1/3 of my meal home.

On Sunday morning I woke up hungover after the Galactic show and stumbled over to the fridge. I ate the rest of the cold pasta while standing in the kitchen with the fridge door open wearing just my boxers and looked out the widow and watched a bum rummage through the grabage can in the alley. I smoked a few bingers before I finished up a freelance article.

We went to Zuma Beach in Malibu when Nicky finally woke up. The drive up to Malibu was quick with very little traffic. The beach was empty aside from a few random tourists. I sat and read the rest of a Lester Bangs book as my hangover wore off.

Caught another flick at The Grove on Sunday night. This time it was Running with Scissors. Nicky wanted to go see the film version of Augusten Burroughs' memoir of his childhood during the 1970s. I saw the trailer and it looked funny. I read some of his book, but never finished it.

I must say that the film had just a tiny portion of underaged gay sex and pedophilia than what was mentioned in the book. Since I never finished reading Running with Scissors, it's hard for me to have any other opinion of the material. I do know that ever since the James Frey incident, Burroughs' publisher added a disclaimer to his book just in case someone tries to sue them after calling "Bullshit!" over some the antics in the book. In fact, the real Massachusetts family that Burroughs lived with filed a defamation lawsuit against Sony pictures saying that Burroughs had an overactive imagination and exaggerated the over-the-top experiences with them.

If you don't know Augusten Burroughs wrote a poignant memoir or Momoir since it was pretty much about his mother. She was a delusional poet/housewife and his father was a homicidal drunk who hates his wife. His mother is awful and treats her child like utter shit, putting her own (marginally) artistic needs first before the basic needs of her family as her quest to make art and become famous outweighs the burden she places on herself and her family.

Hopped up on Valium and a dozen other antidepressants, his mother shipped Augusten off to live with her shrink and his odd family. Hijinks and somberness ensue as the film unveils the wacky family of misfits. One daughter dresses like a slut while the other is a bible beater with a penchant for cruelty to animals, even though she claims to be able to speak to them.

As a whole, the film made me laugh and at times blanketed me in sadness. It was not as consistent as The Departed or Little Miss Sunshine, but several scenes were downright hysterical. Brian Cox and Annette Benning gave outstanding performances and both Gwyneth Paltrow and Joe Fiennes eloquently shined in their minor roles. Jill Clayburn wowed me. She displayed her acting chops as the role of Dr. Finch's eccentric house wife who silently watches TV while chomping on dry dog food.

* * * * *
I figured out that my scale in NYC was way off by about six pounds. So when I initially weighed myself after Senor's wife called me fat last month, I was not 205 like the scale read. In reality I was only 199.

Showcase has a scale that is also off by a couple of pounds. When I weighed myself this morning, I was surprised to see that I had lost weight since I left NYC which seemed impossible. That's when I discovered that the scale was off and my initial calculations were way off. I actually weigh 180 pounds after deducting six pounds from two uncalibrated scales.

But I still dropped about twenty pounds which was my target weight. And on Monday morning, I went running. Most of the area where I ran was flat compared to the hills of Riverdale. The weather is much more pleasant too and I was the only person on the empty streets of LA except for a few ethnic nannies pushing around blonde haired babies in strollers.

I had to piss and ducked into an alley off of Olympic and peed (while running in place) in the corner of some dude's garage. If you have to go, you have to go.

After my run I jumped in the shower and Nicky drove me to Studio City for a lunch meeting at Mexicali. I ate a Cobb Burrito with plenty of lettuce, red onions, bleu cheese, chicken, and bacon. Yeah, I willingly went to the Valley and not to sushi row which is the only reason Johnny Drama would torture himself on a rare trip over the Hollywood Hills.
by Pauly at 10/24/2006 11:12:00 AM