The best parties in life are the ones that spring up spontaneously. It seemed like a normal night. I fired up Party Poker to work off my reload bonus and headed for the NL tables while my brother was played a few SNGs. I sat down at a table and right away I realized I was playing with a loose maniac, one of the craziest I had ever seen on Party Poker (email me and I'll send you his screen name). Any hand he decided to play, he would move all in. I tagged him quickly and waited. He got a few other players on tilt who tried to call him with a better than marginal hand. He was killing pocket pairs and big slick with shit. Against those crazy guys, you really need to wait for the nuts and strike. Over the long run, your big hands will hold up against 97s. I was tempted to push with hands like A7s. Sure it's a sketchy hand, but at my table that was a dominant hand, especially heads up with the maniac. He went from $5 to $100 in about twenty minutes. That guy was pushing all in preflop with any ace; A2, A4s, A6. He pushed with small connectors 56o, 34o, and even pushed with any face J8o, Q6, K2o. His best hand was a AQ and if I called with my A7s, I would have flopped trips.

I was chatting with Bad Blood and I told him to get to my table quickly before the maniac lost all his money. Like I said, he loosened up the table and two other guys (that the maniac badbeated and were on tilt) starting calling big bets preflop with marginal hands, even if the manic folded preflop. It was one of those rare opportunities where if you had the balls of a cliff diver and the patience of a Buddhist monk, you could triple your buy in on one hand.

I waited and waited until I hit a huge flop. With pocket 3s on the button, I called a medium sized bet preflop. Four players including the maniac and one of the guys on tilt. The flop 10-5-3. I checked there was a small bet and then the maniac raised to $10. I moved all in (I had about $30) and he called with 10-8. My set held up and I doubled up! I was ready to leave and play a $50 SNG and maybe a three table SNG when Iggy sat down. Shit. Well, fuck, I had to stick around a little while longer. Bad Blood got on the waiting list and then I noticed that Ryan from Pokerrata sat down in Seat 1. Before I knew it, SirFwalgman and Bad Blood were seated. Then Otis and Maudie joined the mix for a table of seven poker bloggers and three clueless folks. Again, it felt like that scene in Rounders at the Taj. My brother pointed out to me that six of us were all seated in a row. Pretty cool.

We had both AlCantHang and Derek on the rail. And just like that, it was a blogger convention. No invites. No RSVPs. I simply sat down and didn't hide myself from the player search function. If you build it, they will come. And like cockroaches scurrying through my kitchen at 3am, poker bloggers quickly found their way to my table. It was my first excursion with Ryan and my second table appearance with SirFwalgman and Iggy this week. Otis, Bad Blood, and Maudie? Ah, I've played with them so much at this point that our games are like peas and carrots. Too bad the loose maniac left! We would have taken all his money. But there was another $100 stacks at the table, a guy who had loosened up via one of the several bad beats from the maniac.

I had one bad beat. My suited slick lost to AJ when they nimrod hit his Jack on the river. I let Iggy bluff me out of a pot and folded 99 to his 44! I tried to bluff with the hammer and had to fold on the turn when I knew the other guy hit his flush. Speaking of the hammer, it was dropped three times in a row, each time by a different blogger! First it was BadBlood who dropped $25 of his stack in a valiant losing effort to one of the loose guys. Then Iggy dropped the hammer on a huge pot, soon after, it was Otis. Three in a row. All bloggers. Grubby would have been proud.

Things got a little hectic for a Friday night on Party Poker. The bloggers were jacking up the pots preflop and postflop. The $100 stack wrote in the chat, "This is fun. This is the best table ever." I think AlCantHang wrote something back like, "You have no idea." Within an hour, the poor schmuck dropped his entire stack, most of it to Iggy. I wanted to stay all night, but I had some writing to do before I crashed. Tons of fun for sure. And to think, I never expected to be playing with one blogger, let alone six! Al Cant Hang called me a blogger magnet. Maybe so. Too bad I couldn't walk into a bar in NYC and have women flock to my table like my fellow bloggers online at Party Poker. I'd have to drop my pants of course and gyrate my hips into order to draw that some sort of attention in a bar. And thank God for the internet. Where else can I play poker in my boxers, with a Grateful Dead bootleg from Red Rocks blasting in the background, while shouting obscenities like Bobby Knight at my computer screen?

Before I crashed I saw my brother take down 3rd place in a $50 SNG. Way to go. See you at the tables tonight. Two weeks from today, it's the Holiday Classic at Sam's Town! 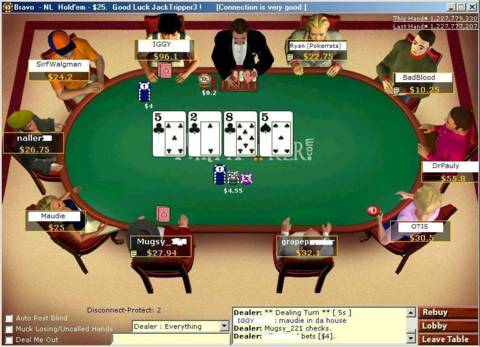