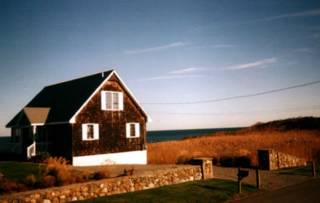 I've been back for a while, but I haven't had the time to write up a few stories from Narragansett. The most recent tale involves Senor and a deer. Where he lives near Point Judith, there are a ton of deer hanging around. Although I had never seen one single deer during my time at his house, his wife insists that they come out very early in the morning and wander through their back yard. Little Senor usually runs up to the window and scares them away. Last week on a misty and foggy night, on his way back from an errand with Little Senor fast asleep in the backseat, Senor was driving down Ocean Road and a deer appeared out of nowhere. He slammed on his breaks knowing that he was going to hit the poor animal. Little Senor slept through the whole thing. Senor drove back to the house and inspected his car. The estimated damages were in the $900 range. Later on he found out that if you hit a deer on a state road and call the police to file a report, that the state will pay for any incurred damages. Now they tell him! By the way have you ever had to remove a hoof from your front quarter panel?

One afternoon, we went back to the Friendly's with the waitress who was in love with Little Senor. She was excited to serve us again. Senor was feeding Little Senor lemons and the kid was loving them. I got a spicy buffalo chicken sandwich with seasoned fries. Yummy. There were no hot college girls hanging out, so I couldn't use the little guy to help me meet co-eds.

I wandered around and took pictures in between writing sessions. I would walk out to the ocean and sit for an unspecified amount of time and let my mind wander. I spent a lot of time the first week daydreaming and I eventually ran of to Foxwoods to meet a Felicia and Glenn who were in town to play in a World Poker Finals tournament. Before the event started, I happened to meet Greg Raymer aka Fossil Man. He won $5 Million at the World Series of Poker in Las Vegas earlier this year. All you have to do is turn on ESPN or ESPN2 at a random time of the day, and you'll see repeats of the WSoP. He's the dude with the funky sunglasses. Anyway, Felicia introduced me as "This is Pauly, he's a real writer." That made me feel pretty good, even though I should have been back at Senor's working on a new novel instead of hanging out in a casino talking shop with a bunch of poker pros (and a World Champion) at 8:50am on a Thursday morning. 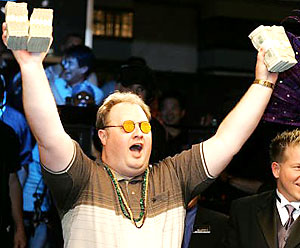 I had one adventure in babysitting. Well, one and a half. If you don't remember, I had my first brush with daycare looking after Little Senor back in May. I barely survived. I was better prepared this time. One instance, Senor and Ang went outside to get somethings out of the car and I had to keep an eye on Little Senor. No problems there. The other time, it was an impromptu babysitting session. I was writing in the kitchen during Little Senor's nap. Senor and Ang were both downstairs in the basement. Senor was working on a take home midterm and Ang was busy with household duties. I thought I heard crying from upstairs and I went to investigate. They have a door with a big glass window leading to the bedroom and I could see Little Senor in tears standing up in his crib. I gave him a pacifier and put him back down to sleep. I thought the problem was solved and I walked out of the room. He popped back up and cried again. I picked him up and took him downstairs with me. I knew that his parents were busy working and I figured I'd give them a little break. I sat him on the couch and turned on the TV. Dr. Suess's Cat in the Hat was playing so we watched that for a while. A few minutes later, Ang appeared and I told her what happened. Senor thought that was hilarious. He said my babysitting skills were vastly approving. Anyway, Little Senor is constantly running around the house and he's got a few teeth too. The kid loves to eat for a one year old.

Over the holiday weekend, I'll finally get around to writing a final update on Gumbo. And I'll try to go into specific details about the creation of the manuscript.
by Pauly at 11/24/2004 01:17:00 PM