Back to the Grind, Card Squad, and the Fat Guy

If you don't know, my brother is blogging over at Card Squad in addition to his own poker blog Poker in the Weeds. Derek got a job with them several weeks ago thanks to the lovely and talented Jen Leo. So far, he's been doing kick ass work. Joanne just started writing for Card Squad as well and is off to a great start too. And if having Derek and Joanne on the same poker blog isn't enough... they added Wil Wheaton to their roster. He's going to be posting the majority of his poker entries over at Card Squad instead of on WWdN. Wil will be live blogging from the WCOOP, which started the other night on Poker Stars. He's expected to play in 11 more events. I'm playing in one WCOOP event on Friday. Wil also mentioned me in a recent post. Thanks dude! 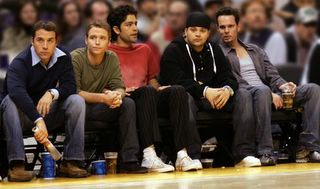 Anyway, take a peek at Card Squad. They got some pretty good writers over there. For more info about the WCOOP, stop by Poker Stars Blog.

By the way, the Fat Guy is doing something great that I have to bring attention to. He's helping set up temporary housing in Texas and needs your help! Stop by his site Buck's on the Brazos to find out how you can help Hurricane Katrina victims.

Over the weekend, I spent most of my time writing freelance articles, working on a few other projects, and answering email. I played a two online charity tournaments on Full Tilt that raised over $38K for Hurricane Relief and lost my shirt on Party Poker. Just when I finally get close to catching up on everything work related, I have to get ready for being on the road for two straight weeks ending with AlCantHang's infamous Bash at the Boathouse or "Boatyard" as Bobby Braceletlikes to refer to it. This upcoming week will be filled with trip preparations and more writing before I embark on some European misadventures. Living in Las Vegas was epic and a lot of fun, but I'd rather travel from city to city then be in one place for too long.

I have some good news. I've decided upon a selection for an upcoming book on travel stories edited by Jen Leo. She was cool enough to ask me to contribute to her book. I have two stories that I'm going to submit. One is about a bender in Amsterdam with my buddy Senor in 1996 involving a bathroom and two underaged French girls. The other, which I hope gets selected, is a short piece about my trip to Japan in 2000. I went there with Senor to follow Phish and we ran rampant through four Japanese cities in one week, partying it up and raising hell, along with meeting Japanese hippies that knew the words to every Beatles and Grateful Dead song.

I watched a little TV this weekend a caught an episode of Entourage. That show is freakin' hilarious. Favorite moment: when Johnny Drama stole the TV from his agent's office. Fuckin' priceless. When is Wil going to make a cameo? I watched the Yankees win 2 out of 3 against Joe Speaker's A's. I saw the Ring 2 and Naomi Watts is pretty hot, but the sequel was horrible. I really dig the first one but wasn't thrilled with the second one. She wasn't naked, not even one gratuitous nipple shot. Zilch.
by Pauly at 9/06/2005 12:37:00 AM