Hola folks. I arrived in Barcelona yesterday via KLM around 7pm local time and was greeted by Mad. She's British and was Otis' assistant at the WSOP and we got along great in Las Vegas. She lives in Sitges, a tiny coastal town about 30 minutes South of Barcelona. She agreed to let me crash at her flat on my first and last nights in Spain if I let her read two of my novels Jack Tripper Stole My Dog and Sweet Nothing. I brought two manuscripts with me and Mad was delighted to have them both. For now, I'm crashing in Sitges and that town is amazing. A lot of people who live in Barcelona have holiday and summer homes in the resort town of Sitges.

On the way from the airport to Sitges, Mad pointed out all the hookers who lined up on the highway! She noted that was excellent fodder for my blog. Some of the prostitutes actually have a lounge chair and a few have umbrellas to protect them from the sun. It's well know that the hookers are populating that stretch of highway. A quick glance insured me that the Spanish hookers are way better looking than the Amsterdam hookers.

I got wicked wasted again last night and I'm hungover for the third consecutive day. I drank red wine, Mojitas, and beer. Mixing wine, liquor, and beer will do horrible and dreadful things to your head and stomach. I also have another story which I cannot blog here. Shit, I got at least a dozen stories so far that I can and will never blog about. You'll have to wait to read the novel.

Mad introduced me to her friends. Most of them were Brits living here, some were Americans. Everyone was laid back and extremely welcoming. I also met a slew of hot Spanish girls thanks to Mad. She introduced me as a famous American writer. They give you a double kiss when they meet you, even if it's the first time. A few of them laughed as I tried to extend my right hand to shake hands. I looked like a total dork.

We played pool and drank Mojitas at a nice place called Magma. By the way, Spanish rules at pool are much different from what I'm used to. Slop counts and you have to sink the 8 ball in the opposite corner of the last ball you knocked in. I know, it's weird. I thought maybe they were trying to hustle me. They just had odd rules. By the way, Mad is a pool shark. She's got skills at the table.

Mad was giving me shit because I was gawking at one woman in particular. She was blonde and she happened to be an American ex-pat. Alas, I told Mad that I was gawking at all the women in that bar, not just her. Sitges is known to have a high gay population. When we walked down one street in particular, Tamar joked that all the guys were ignoring her and Mad and were all checking me out instead. Even though my package is designated for the ladies only, it's always flattering to have anyone check out my crotch.

We ate dinner at a nice place. I had sea bass and drank wine. We hit up two different bars in Sitges. So far, my Spain experience has been amazing. We stumbled home after 2am and had to get up early to go catch a train to Barcelona.

The train cost a little more than 2 Euros. It sped along the coast and I caught magnificent views of the Mediterranean Sea. The sun sparkled off the water and although I was hungover pretty good, I had one of those moments you get sometimes when you are a long way from home. I couldn't believe what I was getting to see and do. Not so fond memories of all those weeks, months, and years of struggling as a writer came to the front of my mind. Gazing out to sea I reminded myself to enjoy every waking second I'm here.

We caught a cab from the train station to the Princess Hotel. I got to see a little bit of the city and from what I saw it's magnificent. From my room in the hotel, I can see the water a few blocks away. The pool is two floors down but no topless sun bathers so far.

The $4,000 Euro buy-in Barcelona Open begins tomorrow at the Casino de Barcelona. So tonight, I have nothing to do. I expect to catch up on some reading and writing. Man, I have so much to write down. I'll wander around the city and get lost which I like doing. That's how you discover stuff most normal tourists don't get to see.

I have run into two somewhat serious problems here in Europe. The first one is the hardest. My ATM card won't work! I usually take cash with me but for some reason, I only took a few hundred Euros and luckily I have some of my bankroll with me which I converted that to Euros. The exchange rate killed me and I'm now on a tight budget the rest of the trip. That's probably a good thing. Me running rampant through Barcelona with a wad of Euros is -EV.

The second problem is that I fucked up and didn't bring the correct USB cable that connects to the camera Flipchip gave me. I have several hundred pics that I cannot upload! That particular plug is about half the size of the one my digital camera uses. So for now, I only have a handful of pics that I took with my small camera. All the good pics are in limbo. I'm going to try to find a small plug today. Otherwise, I really fucked up badly. I'm kinda miffed at myself. I made a checklist and I thought I took the correct plug.

That's it for now. Have to go write and look for a USB plug. More to come.

Here are some random pics from Amsterdam: 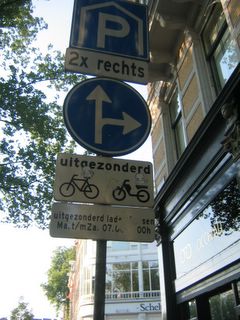 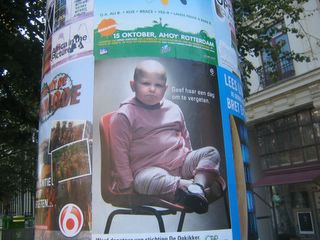 Fat kids are funny in any language. 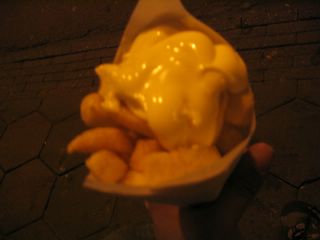 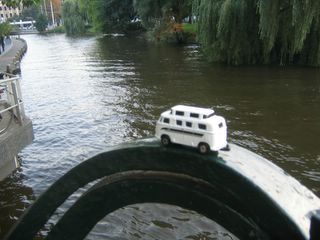 Vee-Dub along the canal near Holland Casino 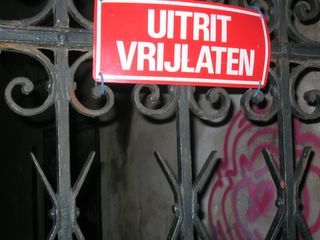 I think it says, "No pissing!" 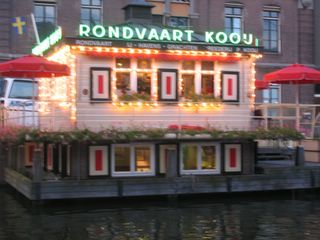