The Rooster and Charity Wednesday

New York City is a pedestrian city. While walking around you most likely will encounter a "bump into." That's just local slang for, "Guess who I bumped into today?"

The more random the person, the more weirder or uncomfortable the situation. Like that one night stand you had with that woman from accoutning after too many happy hour Margaritas. Or some guy you went to high school with, whose name you forgot. Sometimes it's a welcomed bump into and you happen to randomly see someone you haven't seen or talked to in a while. The longer you lived in New York, the more likely you will see casually someone from your past. Sometimes you can bump into a celebrity. Or an old classmate. Or a former co-worker. Or an old teacher. Or some old guy that smelled like radishes that used to live in your apartment building. Thes bump ins can happen any time or any place. In the bathroom of a Knicks game. Crossing the street in the Village. On an uptown subway. Sitting on a bench in Central Park. In line at the Angelika movie theatre. At a hipster bar in SoHo. It's like having an acid flashback without the acid. 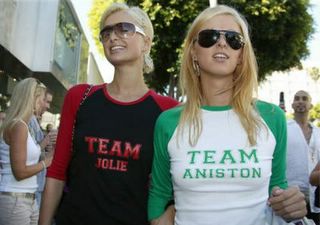 The more time you wander around outside, the better the chance you will bump into someone you know. In the mid 1990s, when we went out bar hopping looking for drunk Jewish chicks to dry hump, my buddy Senor and I used to make prop bets on which one of us will bump into someone we knew. I usually won since I lived in the city most of my life. One night we bumped into one of his friends Igor. Yes, Senor knew a guy named Igor who was drunk and eating falafel at 3am near Washington Square Park.

One of the most satisfying acts of revenge happened to be bumping into an old girlfriend (let's call her Sabine) with someone I just started dating (let's call her Betty), who incidentally was a hundred times cooler, better looking, and had a much higher tolerance for my vices such as gambling and the occasional foray into alco-narco substances. The current flame embodied everything the old flame detested. And the old flame dumped my ass hard and fast without any semblance of remorse. You should have seen the blood flush out of her face when I introduced the two.

"Pauly's told me so much about you," Betty said as she smiled and graciously shook the old flame's limp hand.

Women understand each other better than guys. That was code for, "Yeah, the good old doctor told me how you were an ultra-psycho cunt and were awful in bed. It's gonna take me at least one more year to get his head unscrewed from the damage both you and his mother inflicted upon him."

The old flame, Sabine, mustered up some courage and said, "Good luck."

That was code for, "Just wait until that asshole cheats on you, steals all your prescription pills, and sells your pubic hair on the internet for $35. Then who's gonna be smiling? You blonde bitch!"

So wait, where is this all going?

Today I decided to walk from Times Square to Grand Central Station. It takes about ten minutes and I sauntered past the crowd filled with office workers on their lunch hour and tourists. Along the way, I purchased some Euros from my bank and refused to accept the 50 Eruo bills he had counted out for me. Fifty dollar bills are bad luck and I'm not taking my chances with Euros. He grabbed me twenties and tens and I had a nice Eruo roll that could choke an ostrich.

So I'm reaching Grand Central Station, on my way to meet my lovely assistant Jessica for lunch, when all of a sudden I heard, "Hey Pauly!"

I looked over and there's the Rooster! Yeah, Joaquin himself was standing there. He was rushing to the West Side to meet a friend for lunch, while I was truckin' over to the East Side to do the same.

He wanted to know if I was going to play in one of the card rooms in Chinatown. Supposedly the owners think I'm sort of celebrity and offered me a free roll into one of their tournaments. I respectfully declined. I'm supposed to play in a freeroll for the WCOOP on Poker Stars Thursday afternoon and with the new season of The OC on at night, I was all booked up.

So after I said good-bye to Joaquin, I called my brother and said, "Guess who I just bumped into?"

Derek, Iggy, and Daddy (the blogger formerly known as SnailTrax) all played in the Party Pokercharity relief tournament for Hurricane Katrina. 494 players were in and 90% of the $30 buy in went to charity. I played pretty good. I got great cards and I made it to the final three tables. I was eliminated in 24th place out of 494. No money for me. But 90% of my buy in went to charity so it was all good.