Here's the video of Otis Eating 2 Keno Crayons. You might have to let it load for a few moments before you start playing.

I ended the last segment hanging out with Wil. We decided to drink at every possible bar at the Rio. It was going to be one of those days.

We went to the Hooker bar. Otis hit quads and I drank Greyhounds. We wandered over to the Tilted Kilt. We all flirted with our waitress Kerry and ordered beers. As she rubbed up against Wil, she gave Otis shit about ordering a beer that had a low alcohol percentage.

We spotted Michalski's gang (April, Amy, Change100, Jen Leo, TIm Lavalli, Foiled Coup, Chris Newtown) having a staff meeting on the other side of the room. We ordered 11 SoCo shots... 8 for them and 3 for Wil, Otis, and myself. Our sexy waitress came over and said that there was no more SoCo and they finished the bottle. She was only able to squeeze 8 shots out. We told her to send those 8 shots over to the table.

Wil, Otis, and I had a bet to see how many people would refuse the shot. Otis said zero. I picked two and Wil picked three. At the time three refused. And then they sent us drinks in return. Michalski ordered us pink Zinfandels.

"Motherfuckers," I said to Otis. "We dropped $50 on shots and they send us this week ass shit? Time to chug and show up these asstards."

We pounded the Zinfandels and I wanted to throw my glass at their general direction. I slammed it down on our table and it nearly shattered. That's when a fan wandered over and said, "I love your blog, man!" 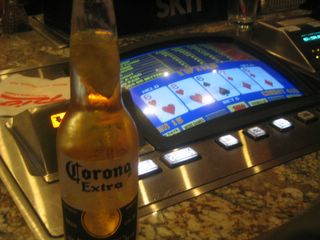 At the Hooker Bar
At some point we were back at the Hooker Bar with John Caldwell. Sarah Bilney just busted out of her event. She was having a beer with John Duthie as Otis missed a royal flush on video poker. Michalski ordered me shots of Tuaca. Change100 was stealing cigarettes from a couple of Canucks who won multiple seats in the main event. Spaceman wandered over and we headed across the street to Gold Coast to play Pai Gow.

3:30am is when things got interesting. All of us (Wil, Change100, me, Otis, April & Spaceman) were at the same Pai Gow table. Otis pulled out eight $100 bills out of his poker bankroll and tossed it onto the felt. Flora, out Pai Gow dealer from Vietnam, yelled out something to the pit poss. Otis was betting $800 on a single hand of Pai Gow. My $25 bet wilted in comparison.

Otis pushed twice as I barely paid attention to my cards. I sat right next to him and watched as he unfurled every hand. He won the third hand as the dealer paid him in eight black $100 chips. He took his cash and chips and tossed a green $25 chip into the betting circle.

"I'm still not close to being unstuck. Does that get me steak and eggs for all of my friends?" he screamed at the Pit Boss.

She nodded her head. Spaceman lost $200. April lost about the same while Wil, Change100 and I dropped about $100 each. 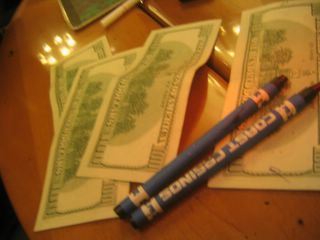 Otis didn't even blink as he picked them up at the same time and bit into the crayons simultaneously. Within seconds everyone at our table was in hysterics. Otis had a frown on his face. Eating crayons is not fun and I prayed that he'd puke before he finished.

"I'm an ass," Otis admitted after winning the prop bet. 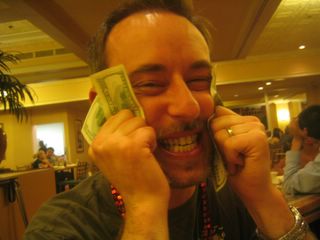 The humble winner
Otis was stuck $1K playing Pai Gow and needed to chase that loss. We all took pictures and videos. By now, you've seen our antics on You Tube. The people sitting next to us were pissed because we were drunk, rowdy, screaming, and Otis had dark blue Keno crayon shavings spilling out of the sides of his mouth.

I'm a horrible gambler and will bet on almost anything. But for $400, I got a great story out of Otis' lunacy plus my mission had been accomplished. I think we all successfully cheered Wil up after drinks, Pai Gow, and Otis eating Keno crayons. 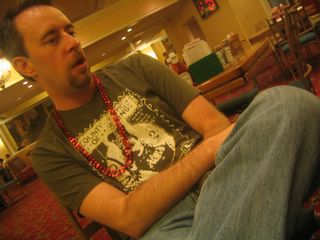