Joe Speaker tipped the bartender $20 for a Jack and coke and a Vodka tonic. The bartender smiled an informed us that we were a part of the Platinum Club, which meant that he'd hook us with drinks whenever we returned. He also gave us a book of Playboy matches. 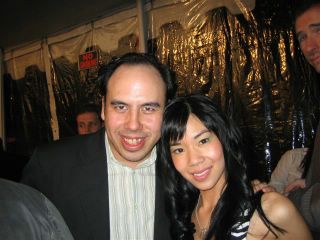 As I stood at the stone bar, I surveyed the scene and didn't see to many people outside. The Grotto was in front of us. To the left was a row of folding tables that had various items for the charity silent auction. Behind that was a raised terrace and the Mansion stood behind it all. I spotted a large white tent in the distance with a DJ booth in front.

We were one of the first shuttles to arrive and there were no naked women milling around the Grotto and Hef was nowhere to be found. We almost had the entire place to ourselves, but we were still missing AlCantHang who had split from the group and took a limo to the Mansion with Steve Dannenmann and Hoyt Corkins.

I spotted Scott from CardPlayer and his girlfriend near the terrace area and wandered over there to shoot the shit. Since we both cover poker tournaments, we've never actually seen each other outside of a casino. I was shocked that Scott actually had clothing that didn't have a CardPlayer logo on it. His girlfriend had to pay $350 to get in. When she told her parents, they agreed to pay for the price tag. They said, "It's a once in a lifetime opportunity!" which was a phrase that I heard uttered a lot. For my parents' generation, the Playboy Mansion represented an urbane sophisticated status. It was not the lair of some sleazy porn-guru from the Valley, rather the retreat of a successful businessman who enjoyed the company of women. Lots of them. Aged 18-25.

I looked around and took a deep breath. I stood in the backyard of Hugh Heffner's palace. He set the standards for the term "stud" over the past four decades. In many ways an invite to the Playboy Mansion was more prestigious that an invite to the White House, with the exception of the Slick Willy years, when Bill Clinton and his hooked penis meticulously jizzed all over chubby interns. With his pants around his ankles, Clinton ran rampant through the same hallways where Richard Nixon used to mutter drunk ramblings at the portrait of Abe Lincoln during the Christmas bombing campaign of Cambodia. Besides from Clinton's two terms, life at the White House was superbly lame compared to the Mansion. Yeah if I could pick two worthy souls who deserved to live at the Mansion after Hef died, it would be Bill Clinton and/or AlCantHang. Those two know how to throw a party.

BG figured out that we were standing right in front of the kitchen, so we were in prime spot for all the hors d'oeuvres. They had a variation of food such as fried wontons, crab cakes, several kinds of sushi, beef with spicy horse raddish sauce, and chicken satay. The beef was pretty tasty and I filled up on sushi as bloggers took turns returning to the bar for refills.

AlCantHang was still AWOL. He called (actually it was loud slurring) to say that his limo was turned away from the Mansion. Hoyt Corkins ordered the driver to take them to the nearest bar, which happened to be the swanky Polo Lounge at the Beverly Hills Hotel. I told him that they could get into the Mansion but had to check in at UCLA's parking lot.

I chatted with John Caldwell from Poker News. This was his second stint at the Mansion. One of the bands he managed in the 1990s was invited for a bash which seemed a lot more out of control that the mellow start to the evening.

Where were all the naked women? There were none. 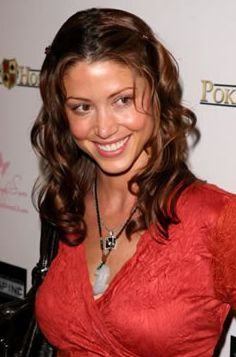 I spotted a few good looking women and slowly more poker players started trickling in, but no Bunnies. Chad found a bar in the tent where the tournament would be played. Since it was on a slight slant, about 70 tilted poker tables filled the gigantic tent with a few gaming tables on the backside. We made a beeline for the bar and walked out a different entrance. We were on the otherside of the tent and saw a few tables set up and the infamous trampoline pushed to the side. Several ducks and peacocks sat on rocks in the pond in the darkness. You had to squint to see them. That's when I spotted the red light in the far corner by some trees.

I stumbled upon the aviary and zoo. A large parrot and cockatoo sat on a perch and I followed the stone steps down a spiral path near a few more cages. The spider monkeys were all the way in the back corner up near the top of the 30 foot high cage. No one was around and I figured that it would be a good spot to get lit. After a brief session, I found the other bloggers and showed them my discovery.

Originally we were told that there would be no photography. I usually carry around two cameras, my small digital camera and a larger professional one that I've taken pics for magazines and such. I left both behind and followed instructions. We soon found out that everyone had a camera except us. CJ and Bobby Bracelet decided to head back to the cars at UCLA to get theirs. While they were gone, I showed the rest of the bloggers the monkey cages.

AlCantHang finally arrived and he told us the most hilarious story involving Daniel Negreanu. He had been drinking with Hoyt Corkins and Steve Dannenmann who kept yelling at Negreanu from inside the limo. They questioned his sexuality and flipped him the bird. When Negreanu passed by us near the Grotto, Al stopped him. When Negreanu realized Al was part of the crew who verbally harassed him a few minutes earlier, he stormed away as we all laughed.

"Negreanu, you're a douchebag!" Al screamed at the top of his lungs.

By then the party started to fill up and a few stars began to show up like Joe Torre, Oliver Hudson, Morris Chestnut, Anthony Anderson, and Jerry Buss. There were more poker players there than I expected such as Amir Vahedi, Erick Lindgren, Mel Judah, Josh Arieh, Gavin Smith, Chad Brown, David Williams, John Phan, Ted Forrest, Johnny World Hennigan, Cyndy Violette, and The Grinder. Even Sean Sheikhan was wandering around. He wasn't hanging around any pros, because they all don't like him very much either.

At that point, the best looking women were some of the guests. Still no Bunnies and no Hef when CJ and Bobby Bracelet returned with the cameras. They shared the shuttle bus with Shannon Elizabeth who did not recall me cracking her A-A during the WSOP last year with J-J. She was kind enough to snap a few photos though.

The cocktail hour was winding down, and for the first time all night, the 8 of us bloggers were together at the Playboy Mansion. We toasted to Spaceman who was our inside man who scored us the invite. Then we headed back to the bar before we figured out how the hell we were going to cover a poker event without a media table, internet access, and a sufficient power source. I didn't care much. I didn't bring my laptop, just my notebook and voice recorder and started to interview random bloggers and guests as the players slowly made their way to the tournament tables.

Before we wandered inside, I turned to AlCantHang and said, "Let's go do some shots."

As the late arriving players rushed past us, he didn't say anything and walked to the stone bar. Just as Babe Ruth called out a home run in the 1932 World Series, AlCantHang made a similar motion towards the bartenders. He raised two fingers and by the time we arrived at the bar, two double shots of SoCo had been poured for us.

Yes, even at the Playboy Mansion, the bartenders know what AlCantHang drinks.