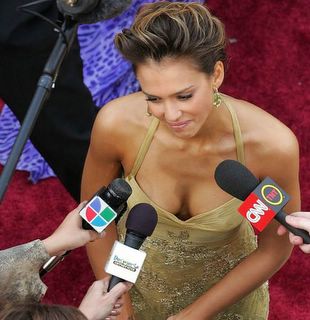 Let me start out by braggging about being the only one in Hollyweird who called Crash as the best picture. It really was the best flick from 2005 and for the first time in a long time, I actually agreed with the inbred dipshits at the Academy. Nothing against Brokeback Mountain, which took a few awards like best director and best adapted screenplay, but Brokeback wasn't the best film of the year. It was an amazing story that needed to be told, but Crash is more indicitive about our current status in society. We're consumed with hate and racism, not forbidden cowboy love. It was good to see the Academy go against the trend.

Anyway.... the night began in the late afternoon. We forgot that they Oscars come on at 5pm on the Left Coast which meant red carpet starting at 3pm.

"Only the loser celebrities show up at 3pm," Change100 explained. "They want all the carpet time to themselves before the big stars arrive later on."

Jessica Alba was another gal that kept me hard during the pre-Oscars ceremonies. Her hair was kinda fucked up but her boobs were out in full force. I wonder if she'd let me hit it and quit?

Change100 cooked an amazing meal before the Oscars... penne vodka. The bacon added to the sauce was amazing. Plus she cooked the garlic bread which I said I was going to do. Alas, I was playing in a poker tournament online at Poker Stars and it was four-handed for almost an hour before I eventually won it. I love PLO SNGs. She was cool enough to let me play and cook my share of the meal. And the dessert? She made chocolate chip & pecan cookies.

Jon Stewart was OK as the host. The intro was funny especially David Letterman wanting to spend time with Steve Martin's kids. Stewart started out slow and got a little confidence as he show went on. Memoirs of a Geisha picked up a ton of awards in technical categories. That was surprising.

The speeches were all lame. Reese's sounded super rehearsed. And the Three 6 Mafia's speech was the best one of all fucking time mainly because all the remainder of the speeches sucked. If you missed it, you can watch it here courtesy of Justin from Live Music Blog. The acceptence speech happens right after their performance.

If there was one party I wanted to crash... it was their post-Oscars bash with plenty of blunts, 40ozs., and tons of bitches and hos. Unfortunately, we didn't get into any of the big parties. So no pics with me and Reese holding her Oscar.

I tied in a big bet with Change100. Crash winning best picture was big for me because I was behind and everyone in the world thought that Brokeback Mountain was going to win. That's it. If you haven't seen Crash... you should. And if you have seen it, then go see it again. The best part of the film is when the old crazy guy shoots the little girl. If you've seen it, you know what I'm talking about.
by Pauly at 3/06/2006 01:08:00 PM