Editor's Note: I know it's Thursday, but I didn't have the chance yesterday to blog this latest entry to my poli-blog This Side of the Truth. Here it is...

I don't care what John Kerry did in 1968 and 1969 no more do I care what George W. Bush did at the same time. This has nothing to do with the future of our country but at this point in the election... John Kerry and his swift boat career has come under fire. And right now the Kerry camp shoulders the blame in this latest debacle that is allowing the next four years to slide right into Bush's lap.

How has Kerry handled the situation? Poorly. They look like desperate fools. His camp has threatened to sue radio stations that play a Swift Boat Veterans for Truth ad and books stores who sell their book, and attempted to smear the sixty plus veterans who are against his run for the Presidency. Unfortunately, when he whined to the Bush camp about pulling various third party ads... they were happy to oblige since the majority of anti-Bush ads come from third party organizations like Moveon.org. But Bush couldn't care less... all this mess has allowed his numbers in the polls to increase a slight lead over Kerry. 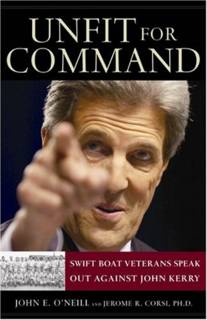 Kerry tried to play up his role in Vietnam and it backfired. Why? Firstly because the people who lived through that era of America history don't want to rehash the painful past. It wasn't a pretty picture back then and for Kerry boasting about his record back then angered a lot of folks. His volunteer service is admirable, but he should have stopped talking about his Vietnam years at that point. His medals, his leadership, and his credibility have all been scrutinized, not just by the GOP, but the media as well. His testimony in front of Congress pissed off the majority of his fellow veterans when he admitted that the openly committed war crimes.

Whether he did or he didn't is not the point. No one cares if he cut off ears or shot kids during combat situations. War is hell. But when he used his service in Vietnam as one of the few reasons the middle of the road voters should pick him... he opened himself up for attacks from all over the political spectrum. The Democratic elite failed to realize that he needed to come up with some sort of cohesive platform aside from "I'm not Bush. I actually fought in Vietnam." Once again, Kerry shot himself in the foot. When white voters from the suburbs go to vote in November, what will they be thinking about? John Kerry and Cambodia in 1968. Or George W. Bush and 9.11?

Is all this just a well timed distraction (from both fronts) to cover up the fact that there is a severe lack of real issues in both campaigns? The war is Iraq is costing us billions of dollars. The economy is lackluster. American jobs are being lost to cheaper labor overseas everyday. Health care costs are rising. Our kids are dumber than ever. More Americans live below the poverty line than ever before. The civil war within the Arab world is getting uglier and uglier. Hundreds of Al Qaeda (and AQ offshoots) operatives are living among us. And what is everyone talking about? John Kerry and Vietnam... a country on the other side of the world and a decade that most people simply are too burnt out to remember or too angry to relive those tumultuous flashbacks.