I know it's Thursday. But I posted this yesterday to my poli-blog This Side of the Truth. Here you go:

What have we learned so far? That whoever wants the juice will use fear to acquire as many votes as possible. The Bush Junta is pushing forth a unsettling campaign of more terror strikes.

The GOP says: "A vote for John Kerry is a vote for Bin Laden."

And the Dems and Ketchup Boy, John Kerry are no better... spinning forth an evil tale of the possibility of four more years of Bush. Manipulation. They prey on your weaknesses. 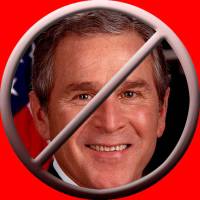 Americans with a deep fear of Al Qaeda, already decided to vote for Bush as of 9.12. And everyone that hates W decided long ago (and months before seeing Fahrenheit 9/11) to put Ketchup Boy in the White House. But here's the problem, everyone who hasn't decided on their pick yet probably won't be swayed by negative campaign ads. In the end, most swing voters vote with their checking accounts and how Washington can affect (or stay out of) their daily life. A higher percentage of rich people vote than middle class folks and poor people. All those rich bankers that work on Wall Street and live in Connecticut didn't even bother sticking with their home-state guy Lieberman in 2000. Sure there are plenty of rich people who hate Bush, but you're not hearing much those folks who trash Bush at the water cooler but at night when they're counting their pennies, their secretly praying for another four years of a Republican administration.

A working class father of two from a mid-size city will more likely vote for Bush not because he thinks Al Qaeda will truck bomb his local bank branch, but because he's afraid that the Democrats will raise taxes and bus poor kids into his school district. Give some Americans some credit. You'll have to give these voters a better reason than "I'm not Bush" to vote for Ketchup Boy. So in the end, they'll probably vote Bush... or worse, not vote at all.

This entire color coded alert level is complete horseshit. I can't even trust my local weatherman to give me the weather forecast a couple of hours in advance. The suggested picks from the gambling experts during Sunday's during football season rarely succeed more than 50% of the time. Our intelligence services dropped the ball on more than one occasion. So why should I trust a color coded scheme to indicate when the next terror strike will be? We'll never really know how many new attempts were thwarted by improved security measures and ongoing investigations. I'd like to think that the next time something terror related goes down that my tax dollars did something to at least slow down, if not prevent the entire plot.

I caught bits of the last episode of Bill Maher's show on HBO. His guests included Michael Moore and Ralph Nader. At one point, Nader brashly pointed out the arrogance within the Democratic Party. I have often criticized their failure to be more inclusive to fringe groups and voters, who have been alienated by the central leadership for the last few decades. The guys in charge now are nothing more than smug, Hollywood chic, corporate whores, pushing their policy to the middle of the road to appeal to the most possible voters. Their vanity will cost them another election. Blame Bush. Blame Nader. They'll blame everyone but themselves. It's easy to ignore and listen to the little people when you're getting bought a seat in Congress by sleazy suits.

Pretty please! With sugar on top!!!

Realizing that Ralph Nader's third party supporters could give the Democrats the extra edge they'll gonna need in November, both Michael Moore and Bill Maher begged Nader to drop out of the Presidential race. For the good of all America. For dramatic effect, they even got down on their knees and groveled. Nader isn't going to budge. The Dems have been threatening the Nader camp with the taunts... you're a loser, so give us your support or Bush is going to win. And Nader shrugs his shoulders. Until the Democrats stop pandering to private interests and corporations, and return to a grass roots government catering to the needs of the people instead of favoring big business, they will continue to loss passionate voters. Nader wants to teach them a lesson, but at what price?