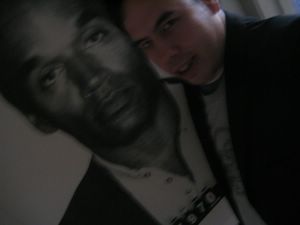 My first few days in LA have been a blur. Between partying until near-sunrise every night and hanging out at the Commerce Casino, the only other place I've spent time was inside a car driving to and fro in this sprawl of a city. It's the weather. It messes with people's minds.

I wrote this bit on my poker blog:

"I've been in LA for less than two days and I've come to the conclusion that every other person you meet is an actor, writer, or pothead. In some instances, they are all three..."

It's funny because it's true. This town is crawling with degenerates, and people with egos the size of Jupiter. At least it feels nice to wake up and see the sun shining and not freeze my ass off when I take my morning piss.

I'm staying somewhere in the vacuum between Beverly Hills and West Hollyweird. Traffic blows, but it could be worse. I'm never on the road during rush hour but you know how bad California drivers can be.

LA doesn't have too many places to eat after 10pm. It's strange so late night meals have been tough to come by since I'm a vampire these days. Change100 and I went to a 24 hour deli that was crawling with hipsters called Canter's. I had a knish and a bacon grilled cheese. Our waitress was a chunky Chinese girl with funky glasses. She was slow as shit and I realized that the majority of service staff I encountered in LA is simply... horrible.

"That's because every waiter or waitress is too self-involved," said Change100, "after all they're all actors."

"Can't they act like they're a good waitress?" I snapped.

Everyone has a script that they are working on, too. For fuck's sake, Change100's potdealer even puts on his own plays! Only in this town could someone actually get away with that and no one blinks an eye.

Showcase is Change100's roommate. He has a day job but is an actor at heart. His two biggest mentionings on his resume include parts in American Pie 3 and Legally Blonde 2. He sings show tunes in the shower and comes home on his lunch breaks to rip bong hits and watch Jerry Springer. And yes, they have a framed autograph from Ron Jeremey and a huge silkscreen of OJ's mugshot.

They have a cricket in one of their walls. It's kinda trippy in one sense and absolutely prevents me from falling asleep on the other hand. At least I've been trying to write during bouts of insomnia.