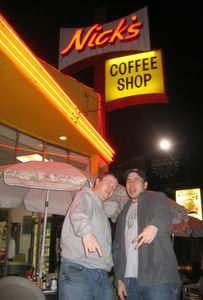 "I told you to get out and leave me alone," the waitress yelled at the homeless guy as she served a table of hipsters their coffee.

It was 8:15pm and the diner was somewhat empty. Spaceman, Change100, and I were eating at Nick's Coffee shop around the corner from her apartment in between Beverly Hills and West Hollywood. We were in the middle of dessert, when an old black homeless man stumbled into the place. He was muttering random things and the 60-something year old waitress told him to hit the road.

The main wall of the coffee shop was cluttered with head shots from B and C-list celebrities like Rip Torn and AJ Benza.

I ordered French Toast with bacon, cheese fries, and an iced tea. Dessert was a chocolate milk shake. I called the waitress, "Sweetie" a few times and she called me "Sweetie" once.

In one week, I've eaten there three times.

* * * * *
I ate lunch downtown with Joe Speaker. Since it was a holiday, downtown was empty for a Monday. We ate a La Pollo Loco, since the Mom & Pop Cuban joint across the street from the LA Times building was closed. I noticed that there were a ton of bridal shops in that area of town. I took a few pictures of random downtown LA buildings. We saw a homeless guy that lost his shoe.

After lunch, I headed to Commerce Casino with Change100 for work. She drove and we spotted two Mexican guys smoking a bowl in a red truck next to us. They laughed at us because we were smoking too.

When I walked into Commerce Casino on Sunday, the first person I saw was James Woods talking on his cell phone. He was nervous and was about to play in Day 4 of the LA Poker Classic tournament. First place pays out $2.3 million and the Hollyweird actor was hoping to make a final table... not so much to boost his acting career, but rather to solidify his poker reputation as being a competent tournament player. He came in 24th place out of 692, which was not too bad. He made the money, but fell short of the final table.

* * * * *
Change100's roommate is an actor. His nickname is Showcase. Our friend's wife Mrs. HDouble (who is Swedish) read Change100's blog and thought that Showcase was Change100's cat... not her roomie. Strange. Anyway.... Showcase went on a cruise to Mexico and called Change100 to tell her that Rick Schroeder was also there. The other night, one of Showcase's acting gigs was on TV. He played a bit role in some Nickelodeon show and we replayed it over and over on TiVo. His scene was no more than thirty seconds but it was cool to see that.

Aside from that, I've been trying to watch the Olympics, which has been frustrating because I've been losing all these prop bets, specifically on the US women's curling team. Oh well.

I watched some LA local news. It's cluttered with stories about deadly car accidents and people driving off the freeways into ravines.

It's been cold for LA standards. It dipped below 50 the other night. Of course that's Spring-like back in NYC.

It's hard to write here in LA. I can't explain it, but I think the sunshine bakes my brain and makes me want to just "chill out" instead of grinding away at the laptop for four or five hours straight.

One more week here. I'm almost even this month playing poker. One good session and I wipe out this month's losses. I can't wait for work to be over so I can fart around, head to the beach, and play poker in one of the many casino, perhaps Hollywood Park.

I got offered a gig to cover a poker tournament on a cruise ship in the first week of March. Yep, Miami to the Bahamas on a three-day tour... and I'm considering blowing it off, too. I'm not a cruise-guy per se and I was looking forward to spending the first week of March in NYC catching up on freelance writing and starting the completion of the Las Vegas book. So right now, I dunno what to do. It's not everyday I get offered a chance to go a free cruise to the Bahamas. I'm totally retarded if I blow it off, yet that's what I'm leaning towards doing.