An hour ago I got nailed by a L.A. motorcycle cop for jaywalking. He gave me a ticket. Change100 got one too. She was super pissed and went on ticket tilt. She doesn't deal with law enforcement types too well. Here's what went down... We were going to walk to the diner two blocks away. As soon as Change100 stepped outside her apartment she said, "It's too cold. Let's drive." 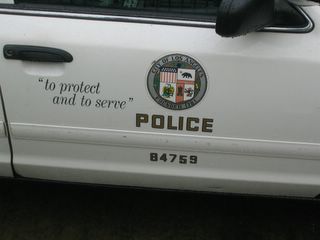 That's freezing by LA standards. Bastards. Alas, we drove and found parking on the opposite side of Pico Blvd. We jaywalked to the other side and as soon as we reached the sidewalk, a motorcycle cop drove up and told us to stop.

"Can I see some identification," he said as he took off his mirrored sunglasses at 8:10pm. "And sir, your zipper is down."

He pointed to my crotch. He was correct. My fly was down. The pair of jeans I wore had a zipper flaw. I liked them too much to throw them out, so I accepted the fact that my zipper would be down a majority of the time.

Change100 launched into a rant and I gave her a look like, "Calm down."

She was so angry she couldn't look at the cop. She turned her back as he slowly wrote us out citations.

"Ma'am," he said to Change100, "200 pedestrians die on Pico Blvd. every year. And over a thousand go to the hospital. You have to cross at designated cross walks."

I heard her mutter "Total bullshit," as she signed the ticket.

When the cop asked me to sign I asked, "No slack for tourists?"

"Nope. Same thing I told her. Do you want me to repeat my speech?"

I signed my name and put a smiley face next to it. That was my first autograph since I arrived in LA.

The cop who pinched us had an Irish last name. If that went down in NYC, the cop would have let my McCatholic ass off with a warning. Wait.... NYC cops are too busy chasing after terrorists to give pedestrian tickets for jaywalking. You would think that an internet celebrity like myself would be able to get off with a warning... but in LA the cops love arresting celebrities, especially ones that try to pick up tranny hookers on Sunset Blvd.

Change100 stormed off towards the diner. She flung the doors open and sat down in a booth. She slammed her fists on the table and screamed, "I'm too angry to even talk about this."

Her tilt lasted about ten minutes. Take a peek of her account of the events. Here's what she had to say:

"I couldn't fucking believe it. Do I have like, some fucking overdraft on my karmic account? Isn't getting unceremoniously sacked from my job bad enough for one month? And now this fucking bullshit. Fucking JAYWALKING! IN LA!! Unbelievable. I was steaming so hard I couldn't even LOOK at the douchebag fuckface cop as he scribbled away on his little cop notepad so I turned and leaned against a parking meter, facing the complete opposite direction. My blood pressure rose and my heart pounded as I tried to keep myself from screaming obscenities and finding the closest sharp object available and stabbing him in the testicles. Fucking cops."

The most fucked up thing about the situation... the same cop who gave us jaywalking tickets had just eaten at the diner. The owner's daughter said she gave the cop 50% off his tab too.

I kept laughing the entire time at the diner, while Change100 steamed over it during our meal. I was supposed to leave California today and fly back to NYC. I decided to stick around for two more days to play poker, take photos, and work on a freelance assignment.

I guess I could be upset about the situation. The way I see it, after all the debauchery I endured in L.A., jaywalking was by far the least illegal thing I did within the city limits. I avoided a feline homicide charge and I'm more than thrilled to be able to leave this town without a venereal disease or a B class felony.
by Pauly at 2/28/2006 11:52:00 PM