Some of the brightest stars were out in numbers at Commerce Casino for the annual WPT Invitational, where some of the top names in Hollyweird are rubbing shoulders with poker's elite. As the name suggests, this is an invitation only event so this was the hottest ticket in town. And yes, I wiggled myself an invite.

Change100 asked me this morning of there was going to be a red carpet at the WPT Invitational. She's used to those sorts of things cause she worked in Hollyweird, and I quickly scoffed at the notion, "It's just a poker tournament."

My oh my, I was wrong bigtime. This is not just a poker tournament. It's a Hollywood Poker Tournament. With all the glitz and cheesyness factor rolled into one messy poker burrito. As soon as I drove into the parking lot, I saw the tent and red carpet ready to great limos and Hummers. I had to get new press badge for the event and fumbled through that process. It was border line hellish and reminded me of a scene from Fear and Loathing in Las Vegas, when Hunter S. Thompson stumbled into the Mint Hotel to check in under a head full of liquid sunshine. I was not mentally prepared for the zoo of papparazzi, with photographers following camera crews and publicists shuffling their clients down the media line, as the Commerce was flooded with reps from several mainstream media outlets. Of course they got first priority, while the normal poker press like Card Player and Poker Wire got pushed to the back of the line. Lucky for me, I mentioned that I wrote for Fox Sports and they quickly ushered me to the front in between Access Hollyweird and the local ABC affiliate.

"Kent Brockman News 7," one news anchor said to me as he shook my hand. His name wasn't really Kent Brockman, but he reminded me of a cross between Kent Brockman from The Simpsons and J. Peterman from Seinfeld.

"Pauly. Doctor Pauly. Fox Sports and the Tao of Poker," I slurred in between sips of my Seven & Seven.

I never drink those. But Ron Rose was drinking Seven & Sevens when I shot the shit with him while we stood in line. And he's a WPT Champion so if it works for him, it works for me. The hallway upstairs was cluttered with banquet tables serving random food. I liked the chocolate covered strawberries. I found the open bar quickly and that's where I realized I could find some of your favorite pros getting sauced up for the event.

And yes, Men the Master was knocking back Coronas. I stood in the corner with the Poker Wire girls as we watched the security guards turn away big time pros from entering. This is work for some of the media folks and it was hard to enjoy yourself at a cocktail party when you have work looming overhead. I have no problems drinking on the job, so I headed back for a refill.

I didn't work the room. I hate schmoozing people and kissing their asses. If I dig something, I usually keep it to myself. I chatted mostly with Jen Leo and John Caldwell from Poker News. I found Foiled Coup too. Jen Leo cornered Jon Favreau and he told her that his show Dinner for Five will not be on anymore. John Caldwell is a music guy and he was talking to the drummer from No Doubt.

I finally went inside to take photos as they seated everyone.

For a complete recap of Day 1 of the tournament including over 30 pictures of some of your favorite celebrities like Wil Wheaton... go read my poker blog. 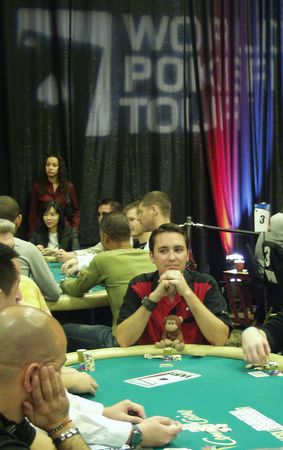 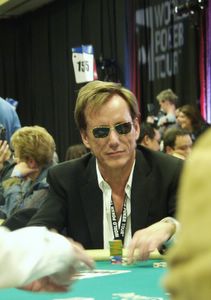 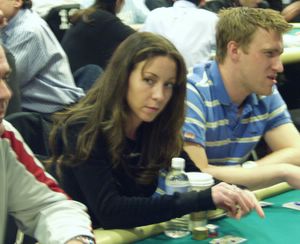 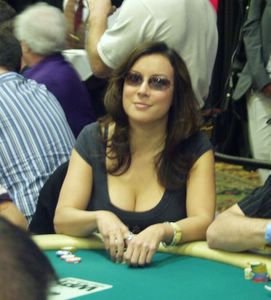 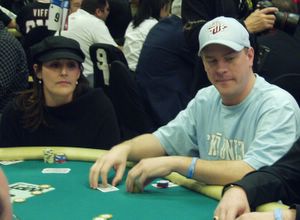 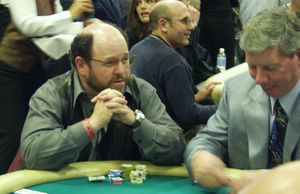 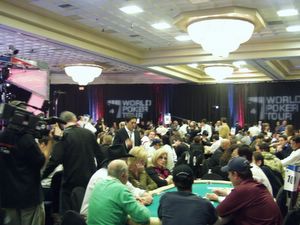 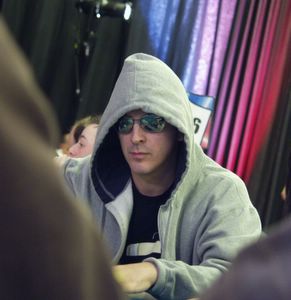 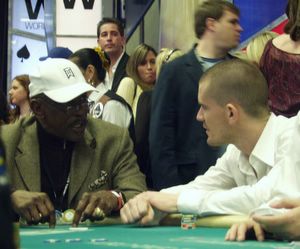 Lou Gossett, Jr. and Gus Hansen in a deep conversation 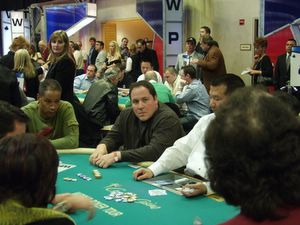 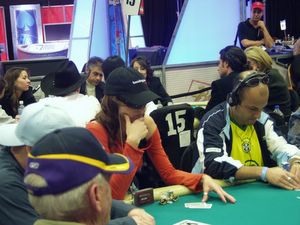 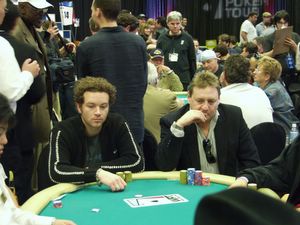