"Dude, find a girl who looks just like her. Nail her. And dump her." - from Say Anything

You don't know me, but I'm a fan of your show The OC. I guess you can color me a borderline stalker because I've been watching your every move since you first came on the air and you have no idea who I am. Well, I never miss a show and have skipped out on big events just so I can watch a new episode. 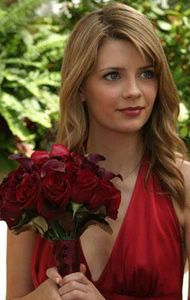 Since I know everything possible about you, I can automatically assume that we have this unexplained connection and a bond. I know you like my best friend. That's why I can freely dispense some relationship advice to you. Here it is as blunt as I can say it...

That's right. Walk away. Let her go. It will be the best decision of your life. Don't draw out three to five years of more melodrama and fall in and out of love a half a dozen times and be caught in triangular relationships where the outsider comes and goes just like the ebb of the ocean's tide and causes emotional distress for everyone in the cast.

Take my advice. Girls like Marissa Cooper are bad news. I'll get into that more specifically in a second. But let's quickly run down her history.

Marissa Cooper's ex-boyfriend is the school bully and picks on minorities and nerds. During his reign of terror she fully supported his vision of tormenting social outcasts. She gets off on watching other people share in her misery.

Marissa Cooper was a virgin and gave it up to her Neo-Nazi and homophobic ex-boyfriend all because she was crushed by the sight of you kissing a girl.

Marissa Cooper tried to kill herself in Mexico after a late night of clubbing in Tijuana. She couldn't stand seeing her Neo-Nazi thug of a ex-boyfriend kiss some floozy. She OD'd on a hefty combination of valium, tequila, and some sort of horse tranquilizer that trainers at Belmont usually give their two-year old thoroughbreds. She not only wants attention, she's willing to commit suicide of the epic Sylvia Plath proportions.

Marissa Cooper got involved with a psycho kid who tried to hold her hostage and shoot her. Even after you told her that he was bad news, she insisted that she be friends with him because it was important for her to be a good friend. That's horseshit because we all know the only reason guys are friends with women so that they can have an opportunity to fuck them at a later time.

Marissa Cooper also endured a eating disorder, suffered through divorced parents, and she even shot your fuckin' brother for Christ's sake. I know he tried to rape her, but still, she shot him when she could have easily missed and shot you. You're lucky that you're still alive. Besides, how we can be 100% certain that she was hit the guy she was aiming for? Hmmmm. Makes you think right?

Now add the whole Johnny the Surfer drama. What total bullshit. You should have bitch-slapped her or broke up with her the second she started making gaa-gaa eyes at surfer stoner dude, who we all know (casting director included) that he's supposed to be a thinly veiled replica of you. She never really fell for Johnny. She fell for the stoner/surfer personification of you. She knows she's not good enough to have you so she lashed out in that way of befriend stoner-surfer dudes with bad knees and sidekicks named Chilly.

Plus Marissa Cooper has a 15-year old pothead of a sister who makes Britney Spears look like Mother Theresa. That's just bad news altogether. Mary Jane toking trailer park vixens wearing short plaid skirts and seducing older men always ends up with us in prison for up to a decade. Marrissa's gold-digger for a mother and a sexually-disturbed younger sister is a dangerous mix for anyone to have to endure. Get out now before you knock them all up and have to deal with a psychologically taught dinner scene that reminds me something from of a Fellini flick on four hits of acid.

And let me tell you a thing or too about dating rich women. It never works. They have no concept about money and make you feel like shit for not having any of it. What kind of chick like that lets you walk around in wifebeater t-shirts all the time? Even the poorest of girlfriends that I had at some point took me shopping to buy a new item of clothing. I can't explain why but the third time after you sleep with a woman, something clicks in her head that says, "I need to buy you a new shirt." Marissa would never cook for you either. Another reason to dump her.

Look, I know you've had a tough life living on the other side of the tracks in Chino. But in The OC, it's a different world. You got big issues. You knocked up another psycho chick, this one from the barrio and she never told you she kept the baby. Oh shit! You're not supposed to know that part of the plot, but yeah it's true. And your brother has one kidney and one testicle left over after Marissa Cooper took target practice on his ass. He fled to Las Vegas and Grubby told me that he's dealing blackjack at the Klondike and has developed a festering addiction to Vicodin. And don't forget about your best friend Seth Cohen. He's the biggest tool in school and President of the Comic Books Club. I dunno how you guys roll in The OC, but when I went to school, kids like that got stuffed into lockers and their underwear ripped to shreds. When are you gonna wise up and realize that the Cohens are only using you as muscle? To keep the bullies away from their Ivy League bound son. Oh yeah, he's a closet pothead too. Just like Marissa Cooper and even her mom, Julie Cooper. She smokes the reefer too. Flee the land of incestual potheads. 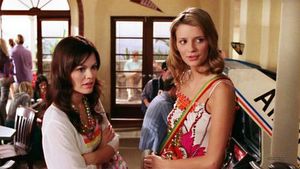 What can I say, you gotta dump the girl and walk away for good.

One day in college about 12-13 years ago, I woke up and found a knife stuck in my door. I lived in my fraternity house and everyone was anticipating a scene out of Fatal Attraction. If I had any bunnies, this chick would boil them. She left a refusal to break up with me note pinned to my door with a knife. Not just a steak knife, but one out of a set of 31. The sharpest of which she said she'd use to cut my balls off if I attempted to break up with her again. If she never got picked up by Atlanta Police for shoplifting tampons at Kroeger's, then I'd be whipped for sure.

Another ex-girlfriend dumped me on my birthday of all days. She was French. No compassion from those cheese-eating surrender monkeys. She waited purposely for my birthday because she knew that for the rest of my life, I'd have to celebrate knowing that I had my heart ripped out on the same day. Talk about torture. I recall her last words were something like, "Happy Birthday. Fuck you. I hope you die."

Then there was another girlfriend who stole forty of my favorite CDs. The snake of a woman took the CDs out of their cases and left them behind, so that over the next few weeks I'd slowly discover one by one that she pilfered a quarter of my CD collection. I'm still bitter about losing Blonde On Blonde and Maceo Parker's Life on Planet Groove.

Sorry I got side-tracked. Here's my point... you need to ditch the rich broad. Quick. Otherwise, you're gonna get you junk kicked in no less than 126 times, lose three teeth, have five ribs broken, and lose all your dignity, pride, and integrity in the process. Love is a powerful drug, opiate, and necessity. Don't waste it on her. Find a nice girl on the rebound, because let's face it, the world is full of scumbag guys who probably just fucked over some nice girl from the Valley. Punch your weight, kid. And stick with the chicks from the 818 area code. They are more your speed. They'll eat Jack in the Box and still give you a beejer in the parking lot of the bowling alley after you take her there for your second date. They'll even pay for the shoe rentals.

Just like in poker, sometimes you get too attached to a hand and you can't let it go. It's pretty obvious from my perspective, that you need to leave the girl. It's hard to see that from your end. that's why you're on relationship tilt. Take my advice. Fold when you know you are beat and save yourself some money. Say good-bye to the girl and move to Dawson's Creek.