"I'm the only one on this room who actually works." - Derek to me, Grubby, Iggy, and the Poker Geek

I watched the sun rise for the fourth consecutive day as it slowly crept over the mountains. We played a few SNGs in our swanky suite late night Saturday/early Sunday morning. The first one was a six-handed. The second one was nine-handed and lasted 3.5 hours!

Spaceman and Derek chopped. I was the first one KO'd, by Derek of all people. We hosted a late night SNG which took forever, Halverson was hitting the SoCo very hard and we were all pretty trashed.

The best part was having Drizz hang out and play Full Tilt on my laptop! During a rare lull in the conversation during the game, I heard Drizz bark at the computer screen, "Why the fuck are you calling my raise?" Maudie came from behind to take down Iggy while the Poker Geek played a $20 SNG on my laptop.

On Sunday we played in the noon tourney. We all had pieces of the Poker Geek. Bobby Bracelet, Derek, BG, Spaceman, and myself each backed the Geek in the tourney. He took 9th place and made the final table, only to miss the money by two places.... As sucked out by A2. Read his blog later for the sordid details. He knocked me out when my 66 lost to Geek's AK when he caught an ace on the river. Drizz bought 20% of my action. Too bad I couldn't cash in my second ever Plaza tourney. Derek blew a huge chip lead early and was KOd as well. BG's friend Nate took first place in an impressive effort.

The rest of the afternoon included blackjack, craps with Joaquin, a few bets on the ponies, and more poker included dealer's choice mixed games. The Fat Guy refused to play.

Here are some random pics including the lovely Mrs.Royal who "fell asleep" on the rail watching Royal play. 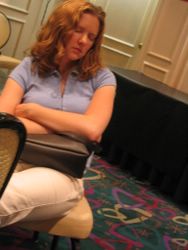 Mrs. Royal "sleeping" while Royal played at the Plaza. 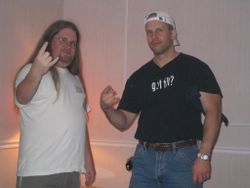 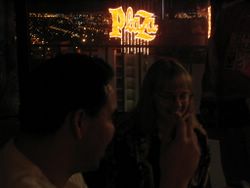 Derek and Maudie during the Suite SNG 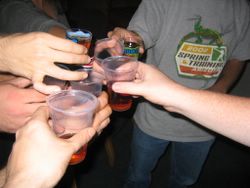 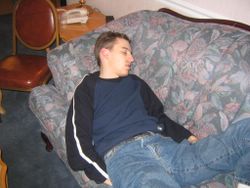 Poker Geek passed out on my couch.
Well that's it for now. Thanks to CJ for organizing the event and special thanks to everyone for showing up. It was truly one of the highlights of my blogging career to be a part of this amazing weekend. Shit, I got to meet a bunch of Canadian bloggers. Pretty cool, eh? I'm sure I'll post some more trip reports in the future.

I must say one last thing... the blogger wives were a cool bunch of folks. Shit, those chicks can sure party. Very impressed with them.

I have to crash now. I start my first day of work in a few hours. Most of the bloggers have already left and the few remaining are bailing soon. Not me. I get to stay behind. I guess I'm finally a local. Expect one of my next updates to be full of WSOP content.
by Pauly at 6/06/2005 08:21:00 AM