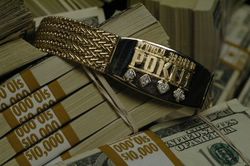 Man, I logged over 26 hours of work at the Rio the last two days. I'm fuckin' beat. I live at the Budget Suites on the ground floor and there's a white trash family next door. It seems like they have 18 people living in a one bedroom suite.

I go to bed around 7am every morning. At 11am it's "Redneck Family Hour" and they are hootin' & hollerin' and kids running amuck outside my door. It's really frustrating. I might have to request a new apartment because the lack of sleep is driving me insane and it's hurting my writing skills.

I swear there's either a drug dealer or hooker living a few doors down. Every twenty-five minutes or so there's a knock on their door. This goes on at all hours. At least I get HBO and ESPNews.

Grubby was right... locals don't get any sleep in Vegas either.

When I get home, it's very cool. When I get up it's blistering hot. I've been eating a lot of fast food the last few days. Today it was Wendy's homestyle chicken strips.

At the Rio, I get free drinks in the media room. If I get them from the "cocktail staff" on the floor then I have to tip them $1. The media room does not have Red Bull, so I have to flag down one of the servers. I've prided myself on not drinking coffee or Red Bull to get by, but for fucks sake, once 2am rolls around, I'm jonesin' for a pick me up.

I'm not gonna complain. After drinking fluids steadily for 12+ hours I have to piss every 30 minutes. At least I'm only spending $1 in drinks. The food at the Rio is overpriced. $5 for a slice of pizza. $5 for cheeseburgers. $2 for big ass cookies. I guess it could have been worse.

I've been getting a lot of compliments on my write ups so far. Funny thing is that I'm writing them at the end of the work day, usually at 6am and I'm exhausted. When I get up I reread my work and I shake my head. I could do a much better job but due to time constraints and to outdo the competition, I have to get as much info out as quickly as possible. 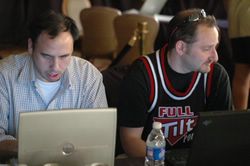 I have not had a sip of alcohol since late Sunday night. I also haven't gambled since then as well. I thought I'd be boozin and gambling all the time. Right now, all I want to do is sleep for a week straight. How am I gonna feel in a few weeks?

I've been meeting a slew of professional poker players. Yesterday's highlight was meeting WPT announcer Mike Sexton. I also was sitting next to Andy Bloch in media row for a couple of hours. His fiancee works for Poker Wire and we're usually in the same area. They're both pretty cool.

I'm slowly getting chummy with the media folks covering the WSOP for other organizations. You seem to bond late night especially since these events are running until morning. I have an advantage right now being one of the few people covering every event. Hopefully this will pay off by the time the main event rolls around.

That's it for now. I have to shower and write some more before I head off to work at 2pm today. I'm expecting that the final table will be over by Midnight so I can sneak off and get some sleep and work on a few other articles.

So far Vegas is kicking my ass but the experience has been overwhelming.