The First 19 Days of Hell

FYI... If you'd like to see what I've written over the last three weeks since I moved to Las Vegas to cover the WSOP...

My Dutch colleagues (@HappyFreaked and @WebJoker) are hysterical folks to share a pressbox with on long ass days when we go a little crazy working into the wee hours. The told me about this YouTube Channel... Epic Meal Time. Holy Shit! Why haven't I heard about this site until now?

Enjoy this epic video about a trip to McDonalds to help get some main ingredients for an 84 egg sandwich ...

Email ThisBlogThis!Share to TwitterShare to FacebookShare to Pinterest
Tags Bacon

The gang shooting the videos for Bluff Magazine are killing it this summer. Kudos to Marty, Sueann, and Michel for their stellar work. Check out the latest installment of BLUFF Live @ the WSOP, especially the hysterical segment of Finding Phil Ivey.

Oh, by the way, because I'm a columnist at Bluff Magazine, they interviewed me about my latest article about the hallways at the WSOP in the current issue. There's a snippet of my interview appearing at the 4:44 mark.

It's that time of year when this space gets neglected. I'm writing daily recaps of the WSOP on Tao of Poker. Some of them are less about poker and more about... life.

I'm also recording podcasts with Michalski, Benjo, and Nicky (aka Change100)... not to mention a few other guests like Remko, KevMath, and Johnny Hughes.

Here's the first 17 episodes of Tao of Pokerati podcast...

Episode 1: Woe Is Benjo (3:59) - Pauly, Dan, and Benjo returned for their first episode of the 2011 WSOP. Dan and Pauly are upbeat about the upcoming summer, meanwhile Benjo reveals he's not looking forward to the suicidal tendencies which crop up three weeks into the WSOP. Dan and Benjo also discuss a potential prop bet about whether or not Howard Lederer makes an appearance at the 2011 WSOP.

Episode 2: Ivey Drops Drama Bomb by Suing Full Tilt and Boycotting the WSOP (6:07) - Change100 joins Benjo and Pauly as they discuss the strange happenings on Day 1 of the WSOP. Phil Ivey became the only thing people discussed the Rio after a rather bizarre series of posts appeared on his Facebook page after he revealed his lawsuit against Full Tilt due to their lack of action getting money back to their players. Also, Benjo explains the scene when James Bord harassed and threatened John Juanda.

Episode 3: Dan's Smoothie and Welcome to the Mothership (3:06) - Dan finally showed up to the WSOP a little late... three days late... and he ran into a credentials snafu. Pauly gives him some guff while he covers the heads-up Grudge Matches, but Dan is digging the plush couches behind the media perch.

Episode 4: Team Pokerati Update and the Men the Master/Hollywood Dave's Fracas (4:58) - Dan and Pauly hang out on the rail of Event #3 $1,500 Omaha 8 after the money bubble bursts. They discuss updates on Angry Julie, a member of Team Pokerati, along with detailing the highlights of argument that almost turned into a brawl when Men the Master (ironically) accussed Hollywood Dave of being a cheater.

Episode 5: Norman Invasion - Dan and Pauly try to hang out at the final table of the $25,000 Heads-Up Championship between Jake Cody and Yevgeniy "JovialGent" Timoshenko. However, they got stuck around a gaggle of drunken Brits supporting Jake Cody and then find themselves getting in the way of ESPN's camera crew while they taped a stand-up for Lon McEachern and Norman Chad.

Episode 7: Sahara Liquidation with Remko (6:12) - Benjo and Pauly discussed the Sahara Casino liquidation sale/auction with one of the members of the Dutch press, Remko. Both Remko and Benjo expressed a keen interest in acquiring a slot machine for super cheap, while Pauly has his eyes set on a Pai Gow table. Meanwhile, Benjo and Remko try to figure out how to ship a slot machine from Vegas to France and Holland.

Episode 8: Eskimo Yes, Jesus No (4:22) - Dan and Pauly try to pinpoint which pros are noticeably absent (Clonie, Jesus, Howard Lederer), while Eskimo Clark sightings have been rampant. They also try to figure out where the old Bat Beat Bar and Lounge went and why its been replace by a oxygen bar.

Episode 9: False Flags and Low Lights (4:04) - Dan and Pauly wander around the Pavilion and Dan points out the flags, or lack of international flags, hanging from the rafters. While Dan spins an international false flag conspiracy, he also wonders about the lack of bright lighting at this year's WSOP.

Episode 11: Bookies, Dumpsters, and Mavericks (5:16) - Dan and Pauly ditch the action at the WSOP and wander over to the sportsbook to watch Game 6 of the NBA Finals, because Pauly bet the Mavs, which is also Dan's hometown team. Dan asks Pauly to describe some of the complexities of sportsbetting, both in Vegas and in the shady underworld of online bookies.

Episode 12: The Tweaker Edition (4:02) - Benjo and Pauly hang out at the Gold Coast and watched a tweaker get 86d by security. They later encounter the tweaker in the parking lot, and Benjo asks Pauly for a quick tutorial about the seedy Las Vegas meth scene.

Episode 13: Black-Hat Bracelet with Change100 (3:59) - Dan shows up at the very end of a big poker event, and observes with Change100 the first major on-the-felt story of the WSOP. They didn’t know as they discussed the color of hats and misprinted souvenir T-shirts going to Haitian refugees that they were witnessing the only other true all-in-and-a-call situation prior to the end of a heads-up match-up between two different kinds of bad-boys several hours later.

Episode 15: Brickless Cash Games (4:43) - Dan and Pauly hang out on the rail of the high-stakes cash games in the Rio. They describe the bustling scene, but are a little disappointed the massive PLO cash game isn't running.

Episode 17: WSOP Fashion Report with Kev Math (5:10) - Pauly chats with Kev Math, who is a self-described "fashion expert." The two compare and contrast the different styles of clothing worn by members of the media. KevMath also reveals why he won't wear shorts.

Email ThisBlogThis!Share to TwitterShare to FacebookShare to Pinterest
Tags Podcast, Tao of Pokerati 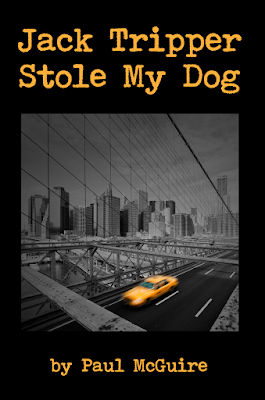 The moment hath arrived. Great news to all of you Kindle junkies.... Jack Tripper Stole My Dog is now available to download for only $8.88!

Click here to buy your copy of JTSMD for a Kindle.

The e-book can be read on iPads (make sure you have a Kindle app).

I caught a couple of Phish shows in Ohio over the weekend. Here's my recaps...

You can also check out two "official" videos from the weekend...

1. Cusco to Ollantaytambo to Augas Calientes by Paul McGuire
People were streaming in all directions from all areas. A group of Peruvian guides, all short men around 5 feet in height with reddish brown skin in alpaca hats, had disembarked from what looked like a cattle car and two Peruvian rail workers at the train's doors hurled backpacks into a pile on the platform, where the guides hovered to retrieve their gear. Meanwhile, hundreds of tourists were getting off the train, while hundreds more were scrambling to catch the train before the doors closed. The train from Ollantaytambo to Machu Picchu ran on the same singular track. A couple of times a day it transported tourists and supplies back and forth, back and forth... More

2. The Chosen by John Hartness
But it's still annoying. I'll grant that visiting a box that hasn't been touched in 25 years might raise an eyebrow or two, but I'm still blaming the attention of the lummox in the off-the-rack suit on my unwanted companion's unabashed card-counting. Either way, the brutes in suits might have had a few questions for me that I wasn't fully prepared to answer at exactly that moment, so I looked at my old pal Lucky.... More

3. Isn't It Good? by Kent Coloma
I once asked my mother if I could change my name to Jesus. I used to quiz my friends and they all wanted to change their name at one point in their youth. I have a stage name now. It's not Jesus. The usual Hollywood pseudonym. My friends and I used to intentionally mispronounce "pseudo" like "suede-oh" for our own amusement... More

4. Zen and the Art of the Frijol by George Tate
Being able to focus and enjoy the simplicity of everyday things is the joy of living. You're asking yourself where this bullshit is headed. I believe there is a Zen return to the Art of making a pot of beans. Breathe deeply and pour a fine glass of wine. Savor it and its flavor for the moment....More

5. The Beatles and I by Wolynski
To a child growing up in communist Poland, the Beatles were everything. There was Lenin, Marx and Brezhnev staring grimly from posters everywhere, promising a life of desolation, but just beyond the horizon, there was John, Paul, George and Ringo. We couldn't buy Beatle records, but they filtered in anyway.... More

I was covering a special event at the WSOP. When it ended, my friend Melissa suggested that Benjo and I sneak onto the TV set and she would take a photo. We did just that and we even got yelled at, but not before Melissa snapped this photo... 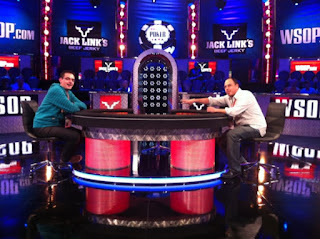 Greatest Poker Player in the World Is Boycotting the WSOP

Phil Ivey is one of (if not the) greatest poker player in the history of cards. In his younger days, he kinda looked like Tiger Woods. That resemblance along with his deft skills at the table garnered him the moniker "The Tiger Woods of Poker."

Last month, the DOJ indicted the major owners of Full Tilt Poker. Phil Ivey also owned a piece, but his name was visibly absent from the indictment. Ivey is one of the highest profiled pro on the website and had won millions playing the highest stakes available in the virtual world. Full Tilt had yet to return funds to their American players because the DOJ seized 9 of their banking accounts. Both myself, Nicky, and my brother all have money stuck in limbo. I dunno when we'll get paid and who knows if we'll ever get paid.

Ivey was pissed that his own website did not do a better job at handling the payout fiasco. As a result, he walked away from the richest tournament on the planet and decided to toss in a lawsuit to boot.

You can listen to a podcast I recorded with Nicky and Benjo... Episode 2: Ivey Drops Drama Bomb by Suing Full Tilt and Boycotting the WSOP.