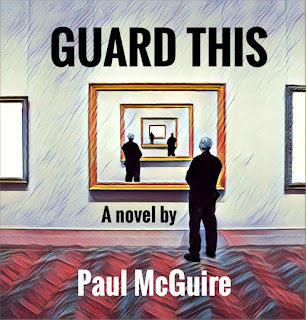 Guard This is my third novel and fourth overall book that I wrote and published since 2010. Guard This is now available as an e-book. Stay tuned for information on a print version and paperback, which is due out in early 2022.

What is Guard This?

Guard This is a project that I started over 25 years ago. It had so many variations and formats that it's hard to keep up. It started out as a screenplay. Then a comic book. Then a novel. Then a stage play. Back to a novel. Then a series of short stories. Back to a screenplay. Then a limited series. Flirted with an animated series. And now, back to a novel.

The current novel version of Guard This came together quickly and almost by accident. In April of 2021, I blocked out a couple of weeks to work on rewriting a second draft of a project called The Kicker, which I penned at the end of 2020. After sitting on a shelf for the customary 90 days, I read The Kicker for the first time in three months and realized I did not have enough time to fix all the problems and rewrite a second draft. I still set aside two weeks without anything to work on, so I decided to give Guard This another pass. It had been 18 years since I last told a version of this story, but was surprised ho quickly the first draft of a the new novel wrote itself.

It took me five years to write Lost Vegas. Took me another five to work on Fried Peaches. It might take me five years to finish The Kicker. But, I didn't have five years to work on Guard This. Call it laziness, or just PTSD from the pandemic, but I didn't have the patience to hold this story back. I'm starting a major project in 2022 and just don't have the time to devote to a prolonged process of re-writing and editing and re-writing Guard This. I convinced myself to put out a less than desirable version of it out now, than let it grind away at my insomnia until 2025. Instead of five years, I gave this project less than five months time from start to finish.

Guard This will eventually become a paperback version in the Spring of 2022. For now, it's an e-book while I accumulate all the typos and errors that I missed to rush this version out before Christmas. I'll thank you in advance when you catch something. As soon as I successfully crowdsource all those typos, I'll convert Guard This to a print version in a couple of months. I promise that it won't take three years in between e-book > print conversion like what happened with Fried Peaches, which finally became a paperback in October 2021.

I appreciate your assistance, support, and understanding. You can purchase your e-book of Guard This here. You do not have to own a Kindle to read it. Your phone or tablet has a Kindle app that makes it easy to read. If you're a Luddite and detest e-books or Kindles, then grab one of my other paperbacks: Fried Peaches, Lost Vegas, or Jack Tripper Stole My Dog.