I've been bogged down with a plethora of sports viewing and sports writing and sports-related projects the last couple weeks, including a weekly preview of Monday Night Football. The MLB season is done. The NHL season is in limbo. But the NBA season is finally upon us. I drew the fortunate assignment to write an NBA preview for British bookies. It's a good life. I can't complain and hope it can continue indefinitely.

It's been a while since I immersed myself deep into pro basketball, especially at the start of the season because the Knicks have been awful the last few years and I had been busy with poker, poker, and more poker. James Dolan is the worst team owner in all of professional sports. Since I live in California, I was considering the L.A. Clippers as a new hometown favorite. Maybe they should be my new team? I could never root for Kobe and the Lakers, so how about the other team in the City of Angels? Or do I abandon the Knicks in favor of the Brooklyn Nets? The Nets are owned are Jay-Z and the Russian mob. You know they'll be plenty of hijinks for any pro team that moves to Brooklyn.

Anyway, I sat down to write a NBA preview over the weekend and thought I was done... and then Oklahoma City went out and traded James Harden to Houston on Saturday night, so I had to start over. Anyway, the original preview ballooned to the size of a short Russian novel, and so I had to break out the butcher knife and trim it down. I also had to split up the preview into two parts.

Here's my NBA Preview for MatchBook:


One of my favorite things I do every week is chatting with Jesse May about the gambling world. He records parts of our conversation for a podcast, so you can get a glimpse into what we're thinking and talking about. Here's the last three episodes of Everything Is Bettable podcast hosted by Jesse. I appear in the opening and closing segments:


Everything Is Bettable - Episode 3: Jesse caught me at the tail end of a bender during the baseball playoffs. I had watched four straight playoff games during a rare playoff quad-header.

Everything Is Bettable - Episode 4: Jesse and I discuss the A-Rod situation when he was benched during the series against the Tigers and how he was trying to pic up Australian models during the game.

Everything Is Bettable - Episode 5: Jesse wondered about my thoughts on the upcoming Presidential election. I told him it was rigged and to bet on Obama.


Also, usually during games, I have been live-tweeting snark and other random stuff about my degeneracy over at @OcelotSports. Follow them for sports betting-related stuff. I also created a second tumblr page which will be a temporary home for my sportsbetting tales, rants, bad beats, and existential musings. Check out Ocelot Sports on tumblr.
by Pauly at 10/30/2012 02:22:00 PM No comments:

Sports Writing and Everything Is Bettable Podcast

Six months ago, Jesse May offered me a juicy opportunity to join him in launching MatchBook Media, a brand new sportsbetting site based in the United Kingdom. Jesse hired me as MatchBook's correspondent "across the pond" specializing American-centric sports like the NBA, MLB, NHL, and the NFL.

Yes, it was like a dream come true... collaborating with Jesse and penning sportsbetting articles. All of my MatchBook columns can be found here. During the NFL season, I will be specifically covering Monday Night Football, which is often the most heavily bet game of the week.

Just the other day, I wrote a preview of the upcoming MLB playoffs. Last month, Jesse handed me the difficult assignment of writing about the N.Y. Yankees' collapse after they blew a 10-game lead.

Earlier in the summer, I got the chance to write about the London Olympics including a piece comparing the original Dream Team from 1992 with the 2012's Team USA. Probably my favorite article was something I whipped up about 12 weird sporting events that should be in the Olympics like competitive eating and the Running of the Bulls.

I even got to write about soccer, which the Brits hilariously refer to as 'football.' I had no idea what I was doing betting on the Euro 2012 championships, but I somehow luckboxed my way into winning a few hundred quid on Spain. I wrote about the Euro Cup in something titled Ode to Keira Knightly. Yes, I'm not embarrassed to say that everything I know about soccer I learned from movies like Victory and Bend It Like Beckham. 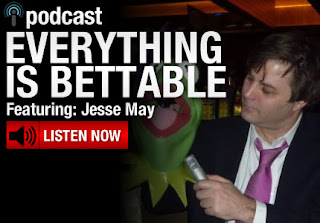 In addition to being editor, Jesse May also hosts a podcast for MatchBook called Everything Is Bettable. Talk about a kick-ass title! I'll be appearing on every podcast as Jesse's sidekick, or "betting compadre" as he refers to me. We recorded two episodes and we're still working out the kinks.

I appear in the opening segment and the closing segment in both episodes...


Everything Is Bettable - Episode 1: Jesse called me out after my girlfriend caught me betting on a totally random the Baylor/UL-Monroe game. Plus, we discussed Floyd Mayweather's betting degeneracy and the debacle on Monday Night Football (Seattle and Green Bay) that led to the removal of replacement refs. Listen here.

Everything Is Bettable - Episode 2: Jesse grilled me about the Jets' embarrassing 34-0 blowout against the Niners and why I'm on PMST aka Perpetual-Mark-Sanchez-Tilt. We also chatted about why I bet a blind tip when I found out the TCU's QB was arrested with a DWI. In the second segment, we discussed the upcoming baseball playoffs and why I think the Yankees are under-looked and why I'm digging the red-hot Oakland A's. Listen here.