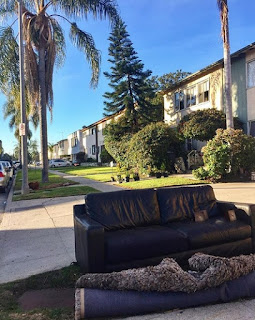 "His wi-fi name is PEARLMAN," Nicky said the night our new neighbor moved into one of the adjacent apartments. That was five years ago.

We called him Pearlman. Well, not to his face. I didn't even know if that was his real last name. Sometimes you have a neighbor you see almost every day but never say anything other than "hello" and nothing much more. That was the extent of my relationship with Pearlman. He told me his name the first day he moved in, but I forget it. It was one a common name, but did it matter? He was Pearlman. I only called him "Buddy" or "Bro" in passing.

Pearlman was the optimal neighbor. He kept to himself and never complained about any of my antics, shenanigans, and tomfoolery. I guess we both didn't want to ruin a good thing and get involved in each other's shit. Pearlman reminded me more of a NYC neighbor than an LA neighbor. The New Yorkers knew how to keep to themselves and had a MYOB attitude, whereas the self-absorbed, passive-aggro, flash over substance LA vibe is ubiquitous in the Slums of Beverly Hills.

Pearlman did a couple of odd things that made him stand out enough to warrant a mention in this ghost town of a blog. He had OCD and I grew accustomed to his unusual tics. Like opening and closing the lid on the recycle bin six times before he could walk away. Must be torture to live imprisoned by your own compulsive oddities. Sometimes Pearlman went through the process three or four times (times 6, so that's 18 to 24 peeks) before he felt comfortable enough to walk away. If he went through that arduous checklist, I could only imagine how long it took him to flush a toilet.

Pearlman did a similar thing with the stairs. He'd take three steps up, stop, and walk back down to check on his car. Then repeat the process several times and you'd hear his car horn beep to indicate the alarm was armed. I must've interrupted him in this process 20 or 30 times over the last 5 years, which made me wonder if he secretly harbored a resentment toward the guy who fucked up his "check the car 6x" routine.

Then again, maybe Pearlman thought I was cool because I didn't think he was weird for going through his routine. A previous neighbor bitched to me multiple times about the "loud noise on the stairs." Looking back, that neighbor liked to complain a lot...about everyone and everything. I'm glad that guy no longer lives here. I didn't care for the malcontent, and I betcha Pearlman hated his guts too. Ah, I wish we were closer then we could have commiserated over neighbor gossip.

Then again, that's what Pearlman was awesome.... he didn't get involved and stayed out of the fray.

Pearlman had a girlfriend for a year or so. It was during the election because I'd hear them watching election coverage together. Pearlman was single most of the time. He frequently dated local women via J-date. Most of them were duds, but he hit it off with a Sandra Bullock clone (think Sandy circa Speed). They didn't date per se, but she'd show up every few weeks for a late-night booty call... usually after his arranged dates fizzled out. When Pearlman's lady friend spent the night, she always left first thing in the morning. Sometimes before sunrise. I'd be up in my office writing and I'd hear her creep down the stairs to meet her UBER driver.

After an absence of several months there was a Sany B sighting. I assumed she and Pearlman had called it quits, but shortly after the new year I spotted Sandy B. I woke up super early and went for a sunrise workout, when I opened the door and spotted both of them at the bottom of the steps saying goodbye. It was one of the rare times he joined her outside and I overheard her joke, "I haven't done this walk of shame in a while."

I had not seen her since.

Pearlman ordered from Domino's Pizza once a week. Usually on Wednesdays or Thursdays. He rarely drank, but smoked weed once in a blue moon... something I learned about from my former neighbor who didn't like loud noises or aroma of cannabis.

I heard two guys move a couch out of Pearlman's apartment last Friday morning. I assumed he sold it and awaiting the delivery of a new couch. I forgot about the incident until a moving truck showed up on Monday morning. Two guys emptied out his apartment in less than an hour. I saw him out front, but we didn't speak. I didn't ask him where he was going. I just nodded and he nodded back.