I woke up to a thud and a crashing sound. Broken glass? I jumped out of bed with one thought on my mind... someone just broke into the apartment. I grabbed a golf putter. That would be my only weapon until I made my way to the kitchen and grabbed a knife. I rushed into the living room expecting to see a would-be-robber shimming his way through a broken window. Instead, the living room was empty. 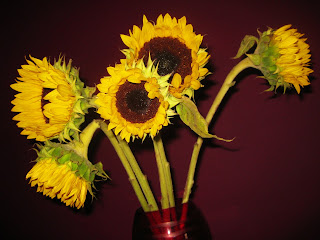 The culprit? A large vase had fallen over. Did it happen at the tail end of an earthquake or was it something else? Nicky woke up and said that she didn't feel an earthquake.

My deduction? Five sunflowers (over a week old) were in a large vase. They were dying and in the middle of the wilting process. The heads of sunflowers are massive and their collective weight tipped the vase. It crashed off the entertainment center and onto the hardwood floor. The vase shattered into several large pieces and thousands of tiny little pieces. Talk about one bitch of a project to clean up.

As per the usual, Nicky went back to sleep and I was left with the task of cleaning up the broken vase. That's when it occurred to me that perhaps it was a ghost. This is an old neighborhood so you never know.

Phase 1 of the broken vase is finished. I removed all of the visible pieces of glass at ground zero. Phase 2 will be Nicky's job when she wakes up... a more thorough cleaning of the entire room since I already discovered a couple random pieces of glass out of the range of the original impact area. Lucky for her, the glass was red so you'll be able to see the pieces.

I'm still deciding about the impact of Twitter on my life. I have been curtailing my online reading over the last few days and I only catch up a couple of times a day instead of refreshing everyone ten minutes, which I used to do with Bloglines.

One of the things I like about Twitter is the ability to go back and make a rough timeline sketch of what I did on a particular day.

Here's an example of yesterday's tweets (all times ET):

1:03 PM worked out two mornings in a row. attempted heavy jogging for first time since car accident. im a little sore & still out of shape.

3:20 PM jack cheeseburger at nick's with well down hashbrowns followed by a trip to the smoke shop for blunt wrappers. time to write a short story

4:01 PM Who eats more in a day? @SnailTrax or Michael Phelps? http://tinyurl.com/68zlmr

6:20 PM I watched Thao's Bag of Hammers video 5 times in the last 20 minutes. http://tinyurl.com/5oq5py Now I know all the lyrics

7:45 PM Finally got to write some fiction. Short story. Needs some more work. Listening to Girltalk while I write.

2:03 AM Sweet Svetlana sat down at one of my tables on Full Tilt.

And in case you were wondering, here's the Thao & the Get Down video that I watched like a dozen times last night...


Yeah yesterday was sort of a lazy, yet productive day. I have been eating better (and a lot less than I had been) and I actually worked out three days in a row. As soon as I'm done writing this, I'll head out and walk two miles and try to jog one.

Yesterday was a special day, because for the first time in a while, I set aside time to write fiction. No more excuses. Just write. And I did. Nothing too extraordinary. I'm very rusty, but it felt good to explore the creative side of my brain again. Reminded me about how much I missed fiction and that my real goal is to write short stories and novels. The current path is just that... the path that I have to take on my journey towards a life that I'm trying to finally get to.

I have been playing online poker every day this month. Sometimes, I'm only play for about a half-hour at most and I have never played more than a couple of hours in one sitting.

I also finally caught up with the latest episodes of Weeds and Generation Kill. I stumbled upon a ton of YouTube videos for GK, if you are interested in that HBO series.

I also spent a lot of time studying London's underground maps. I'll have to take the tube to work every morning during a work assignment in London at the end of September and the beginning of October.

That's the work side of my trip. London will be all work, but Amsterdam is all play. I have two Amsterdam legs set up... before and after my London assignment. I'll rage solo for three days, head to London for a week or so of work, then Nicky and I will head over to Amsterdam for five days and nights of mayhem.

I found a great deal and rented a couple of apartments. The same apartment in fact for both legs. Much cheaper than staying in some of their hotels and a much healthier alternative than staying in a fleabag hotel in the red light district.