It snowed in Las Vegas on Monday. Nothing special, just a couple of inches mostly around the foothills of the mountains and in Summerlin where I lived this summer.

The bad news was that certain parts of I-15 were shut down, specifically Cajon Pass which we need to take to get back to Los Angeles. We had alternate routes but with the rain and bad weather, it would have taken us at least twice as long. Who wants to be driving in shitty weather for 8 hours?

Instead, we decided to stay in Vegas one extra day and will drive out in the morning. The positive side was that I got to have dinner with Flipchip and the Poker Prof at Burger Bar, which has some of the best burgers in Las Vegas. I also bet on some basketball. I hot a three-team parlay and won a big bet on the Magic. I turned a slight profit gambling in casinos during this trip. The downside is that since we arrived on Wednesday, I lost about $500 playing online poker in my hotel room at the MGM. That number was much higher, but I cranked out a winning session last night to lower my overall online losses.

As the dawn of the new day began, I gazed out of my room at the Excalibur and snapped this photo... 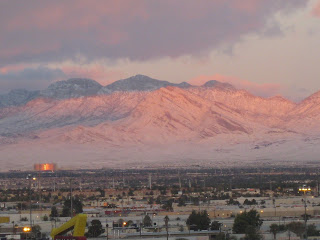