Before I begin, I have to explain a theory first.

This is an unproved theory that I developed over the years, but many friends tend to agree with me. You see, the universe? It's full of life. We're not alone. Aliens are here. They have been here way before the dinosaurs. We can't see most of them because they're in hiding -- underwater bases or deep beneath the Earth's crust.

There are even a few aliens hiding among us. Some in plain sight, like Sam Cassell who played with eight different NBA teams over his professional basketball career. Other aliens include that Japanese guy who eats all the Nathans hotdogs and Thom Yorke from Radiohead. 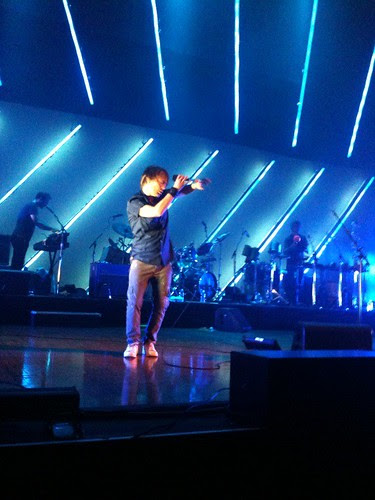 Thom Yorke
Photo by: Joydoy197
With that said, Radiohead is one of my favorite bands. The rest of the band members are humans. Brits to be exact. Why Thom Yorke chose to hide out in Oxford, we will never know. Maybe he liked all the intellectuals, or maybe he found a group of musicians that understood his plight... that he was an alien stranded millions of miles from his own home.

Even if you think I'm full of shit about the alien stuff, just think about those worst moments in life when you felt uncomfortable with everyone else around you -- especially yourself and your own body. Most people call those terrifying moments "high school" and others call it social anxiety disorder. For me? It's called... every day. But you make the best of your weirdness and the weirdness of the people around you. Sometimes I think I'm the human and everyone around me has been possessed by aliens. Some of you might think that I'm an alien, which if that is the case, it would make a lot of sense.

Anyway, as I stated earlier, Tom Yorke is an alien. He's a very sad alien because he can't go home. But while he's stuck here, he can't understand the human condition - why we're so destructive to nature and ourselves and the universe. Music is essentially math, and math is universal which is why Thom Yorke gravitated to music - it's the most real entity in the universe and that gives him a semblance of happiness.

Thom Yorke recorded a solo album a couple of years ago named Eraser. I'm sure you can find 1,001 meanings, symbols, and other mystical shit by over analyzing the name of the album. For musicians who play in a famous band, their first solo effort is a true statement of their artistic vision. The band? A group creative consciousness. The solo album? A glimpse into their subconscious.

I took Thom Yorke's solo project with a grave understanding that that is the music he wants to play. In other words, we all have a soundtrack playing inside our heads. Our own musical melodies. Eraser was a chance to peek into Thom Yorke's alien mind and listen to what's playing on the loudspeakers. The music -- the chatter inside his head -- was always changing yet never deviating too much from one central boulevard of poignant and spastic energy. At times the dissonant moments were overcome by serene harmony. The majority of the time, we got to see what made Thom Yorke tick, or rather, what made his synapses fire. He simply cannot sit still and has to move around contorting back and forth while singing or bouncing up and down while strumming on the guitar like a little kid jumping up and down on his parents' bed.

Thom Yorke assembled a group of musicians that he had never played together before Thom assembled them. They didn't even have a real name. They were simply four guys backing up Thom Yorke.

Nigel Godrich, a trusted chap from the Radiohead family as the producer of the music we love dearly, varied from keyboards to guitar... essentially playing whatever instrument was needed at the time since Thom Yorke was alternating better a piano and guitar.

Flea was Thom Yorke's bass player. The last time I saw the Red Hot Chili Peppers perform, Flea was buck naked with the exception of a white sock that he used to cover his junk. Flea was fully clothed this time around and just like Thom Yorke, he took advantage of a spacious stage where he could pogo, bounce, shake, and jog around.

The other two musicians have been around the block before; Joey Waronker (drums) played with Beck before while Brazil's Mauro Refosco (percussion) frequently jammed with the legendary David Byrne. Refosco was a jack-of-all-trades on the stage and must have had a table full of random items (like metal bowls) to make odd sounds that Thom Yorke had used computers to create on his first album.

Nicky had a blast. She loves Radiohead and was impressed with the quality of our seats -- second row mezzanine in the center -- so close that we could see Thom Yorke's droopy eye. The art deco theatre held less than 2,000 people and it's claim to fame was that Judy Garland once performed on stage during the Great Depression.

Anyway, since this was not a Phish-show and a band with a very low hippie-element and non-existent-wook-factor, Nicky had blast making fun of the hipsters. We kept an eye out for random Hollyweird celebrities that might be sitting in the side boxes - or even in the row in front of us. The night before Spiderman, Don Johnson, Anne Hathaway, and Ed Norton caught the gig.

Sadly, the parking lot scene was lame. No hippie chicks in butterfly wings selling veggie burritos. No nitrous mafia hawking over-priced balloons. No wooks with tour puppies slinging molly. The only people I saw in the lot were a car load of hipsters getting drunk off of their own angst.

I secured tickets via Ticketbastard because the Joker told me about the tickets five minutes before the sale time. I could only get two and lucked out. I had so much bad ticket karma this year trying to score Phish tickets online -- so I guess I finally had some good vibes coming my way because not only did I score tickets -- I scored some of the best tickets in the house.

Encore: Lotus Flower / Moon Upon A Stick, Skirting On the Surface, Super Collider

The first set was all of Eraser. There were sevens songs performed over two encores including two Radiohead tunes (Thom threw everyone a bone with a rare Super Collider and Paperbag Writer) and five songs that represented new material that Thom Yorke had written during his time up in a house in the Hollywood Hills near Laurel Canyon. Lucky mofo. That's where I want to live, and Thom spent the last few weeks there rehearsing and writing new material.

The first three songs of the encore were just Thom Yorke solo. He played guitar for Lotus and the piano for Skirting On the Surface and Super Collider. In between songs,a few people shouted from the crowd. One guy particularly annoyed Thom Yorke and he snapped, "Hey loudmouth! Shut the fuck up!"

You don't hear too many Brits dropping f-bombs, which is why I loved it. Genuine emotion. The guy is a tortured artist and an alien unable to get home. All he wants to do is play music and not have some drunken jerkoff request Radiohead songs.

The show was rather quick but an intense 80-85 or so minutes. Thom Yorke seemed upbeat and in good spirits. I was thinking that these concerts in L.A. were nothing more than he trying to contact the Mothership to pick him up. Sort of like E.T. phoning home, but Thom Yorke is calling out to the universe with his solo tunes. Maybe he knows something about this 2012 hoopla and found a small window where he might be able to hitch a ride back to his home planet.
by Pauly at 10/06/2009 03:00:00 AM