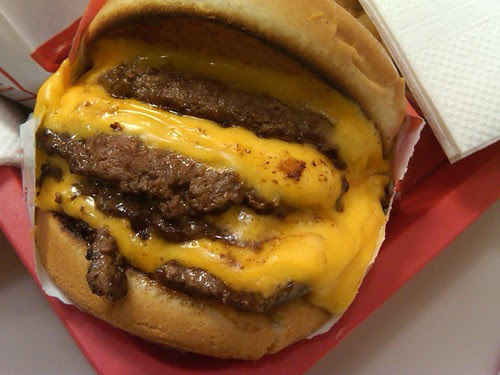 Sometimes, you just have to feed your inner Fat Elvis.

The last two weeks have been what I call my "Fat Elvis Stage" where I stuff my face without any semblance of a conscience. I already know that I will embark on a life of clean living in January. That's my self-imposed rehab. I cleared most of my work schedule and will be fine tunning the last bit of Lost Vegas while I work out everyday, eat healthy, shed the excess poundage that I put on during the 10 week bender to end 2009. Mist importantly, I'm going to ween myself off the pain killers - for the third time in the last 12 months.

It's not going to be an easy task to accomplish all of my goals but I welcome the challenge. This will be the first January in I don't know how long that I will not be traveling to an exotic locale, so I'm using that time wisely in an attempt to stay off the grid for as much as I can while I repair so many things in my life... my back, my morbid addiction to pain killers, and most importantly... repair Lost Vegas before I put that out for public consumption.

Time has been my enemy in 2009. I'm going to make it my ally in 2010. I slowly came to grips with my limits and liabilities over the last twelve months. Now that I know my parameters, I have a better idea of what to expect in 2010.

Hence the 4x4. I always wanted to attempt the feat. I've eaten two 2x2's in the past which in essence is more food because of the extra bun. That's why I was confident in my ability to destroy 4 succulent patties and 4 pieces of cheese. Since I had some room leftover, I indulged in a chocolate shake. Yeah, that was overkill. But I have to enjoy it while I can.

The machines are winning the battle and yet they are essential in my life. My goal is to limit my slavery to said machines and explore as much time away from the laptops than in 2009. That means spending more time outdoors and thereby improving my posture, bad back, and eye strain. I understand that I have to find a happy medium to keep me sane.