Five minutes before Nicky and I were about leave our apartment on Tuesday, she noticed that a Fed Ex truck had pulled up in front of our condo.

"Is that it?" she squealed with excitement.

I had been waiting a couple of days for two proof copies of Lost Vegas. This is literally the last step before I can officially sign off on the project. I noticed a couple if stylistic errors already so we're going to tweak what we can and then we're done. At that point, I flip the switch and we can start selling Lost Vegas to the public. 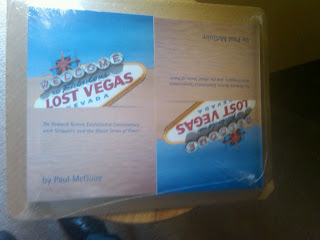 I slowly opened the box and Nicky was super excited as the anticipation rose. I was mostly terrified because I dreaded the worst -- that the book would look like shit. Alas, when I pulled the shrink-wrapped books out of the box, I finally saw a material product that represented five intense years of work.

I held my breath as I tore open the plastic. I fumbled a bit because my hands were shaking. The inspected the binding first. Have no idea why. Then the back and finally the front. The cover was pristine. My friend Kat was cool enough to create the cover art in her spare time and wow -- I was blown away. It really enhanced the entire product. My friend Maudie snapped a photo of me when we were in Key West a few years ago. Ironically, the photo was taken at Hemingway's house. A bunch of us had gone on a tour and Maudie actually took a decent photo of my ugly mug. A thumbnail of that photo appears on the back cover along with a blurb from my colleague John Caldwell.

I flipped through the book, randomly stopping at different pages. I started to read a few sentences when I'd get a little anxious and flip through a few more pages only to repeat the process.

I handed Nicky one of the copies and her face lit up. That's when the guilt set in. I felt as though I should be happier -- at the least, I felt as though I should have been on a equal level of enthusiasm as Nicky. I dunno what happened to me. I wasn't sad or sullen, but I wasn't bouncin' off the walls. I was definitely excited in my own way, but whenever it seemed as though that emotion will step out in front, it got shoved aside by fear of... failure. For the first time I started the project, I froze up. You would think that fear would have held me back during the writing or editing process... but it wasn't until the final step that I found myself paralyzed.

I stuffed the book into my bag. We were running behind schedule and needed to get a late lunch before we headed to work. Nicky was supposed to work until 5am. I cou;dn't wait that long and left with Benjo around 2am. He gave me a ride home and I went into the condo and read the first five chapters. Surreal is the best word to describe the experience. I read the manuscript from start to finish at least one hundred and fifty times -- in this year alone. But this was the first time I read it as an actually book. As I turned every page, the inklings of fear slowly dissipated.

If you want to insider information on the release of Lost Vegas, then you should follow @LostVegasBook on Twitter, because that's the first place I'll be announcing the official release date.
by Pauly at 6/10/2010 01:42:00 AM