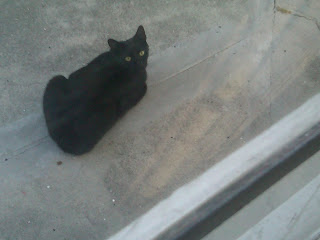 Diablo is an adorable pain in the ass. It's no coincidence that his name is Diablo. You see, Diablo likes taking a shit underneath our window on a patch of dirt in between two bushes. I never noticed the pile of turds until Adam (former upstairs neighbor) pointed it out. After watching all of these Hoarding shows, especially ones with tons of cats shitting all over houses leaving mountains of cat shit behind them, I sorta freaked out and took it as my personal mission to make sure Diablo found a different spot for daily deification. I cleaned up as much old cat shit as possible and hit up the internet in search of homemade recipes to prevent stray cats from shitting on your property. I found dozens of ideas from different gardening sites detailing what you can do to prevent cats from shitting in your flowerbeds.Supposedly cats dislike citrus and Cinnamon. During a late-night speed freakout, I sliced up the remnants of a couple lemon peels and grabbed a small bottle of Cinnamon. I walked outside, spread the lemon peels around the dirt patch and then sprinkled Cinnamon. Well, my intentions were to sprinkle the Cinnamon, what actually happened was that 80% of the bottle sort of rushed out and created a small reddish-brown mountain. I had to spread that around. The next morning, as soon as the SoCal sun began baking everything on the ground, I noticed the not-so fun pungent aroma of decomposing Cinnamon. It smelled just as bad as the cat shit. The next evening, during an internet search, I found some sort of pellet mixture that kept cats away. These pellets were made up of coyote and fox urine, which I learned are natural enemies to cats. Instinctually, if cats smell a hint of coyote urine, they will stay away, far away. So I dropped $20 on a can and a few days later, it arrived in the mail. It looked like a can of supermarket brand Parmesan cheese, and smelled very similar. I sprinkled it outside on the dirt patch and it looked like someone dropped a bag of cocaine. So now, this dirt patch, which formerly contained Diablo's cat feces (and who knows what other feral alley cats were also using that bit of dirt for their morning dumps), was covered in lemon rinds, Cinnamon, and now a flaky white substance that supposed contained coyote urine. I was not about to lose this war and escalated the ground attack. As a form of protest, I found Diablo sitting on top of Nicky's hood. You could see his little paw prints trekking up the semi-dusty window shield (the lack of rain in SoCal often creates a thin layer of dust that is more visible on black cars than you would think) and he plopped his fat ass on the top of the roof. I caught him hanging out there many times in the past, but when Nicky was in Argentina, he had been making that his nightly ritual. I feared that he was gonna piss all over the roof to retaliate the fact that I had taken away his favorite shitting grounds. But fuck man, I as not going to let a fucking black alley cat get the best of me.
by Pauly at 10/01/2010 11:39:00 AM