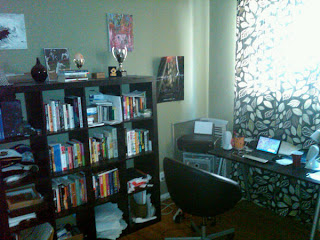 About a week ago, I sat in my office and looked at my bookcase. It was almost empty save for three or four books. The bookcase was part of a birthday present from Nicky a few years ago. She renovated the space for me so I had a comfortable place to write. At the time, I only had a handful of books in LA but over the last couple of years, I slowly filled up the numerous shelves, so much so that I created different categories. One "cube" had books from authors I knew in real life (like Wil Wheaton, Martin Harris, Jonathon Schanzer, John Hartness) and another was filled with poker books (from authors Johnny Hughes, Michael Craig, Jim McManus, Amy Calistri & Tim Lavalli). Other sections included music/music writing, fiction (Bill Sytron, Tom Robbins, Arthur Nersesian), and "apocalyptia", which can only be described as books about the forthcoming financial collapse, peak oil, the war machine, and the deterioration of civil discourse.

About nine months ago, I realized I had accumulated too many books because one of the few things I spend money on is... books... especially used books. Amazon.com is an evil genius, but they introduced me to the swift ability to buy a book for cheap and under a buck. The scam was in the postage (up to $3 from third-party sellers), but I must've bought almost a hundred used books for under $5 total (including shipping). With Amazon's free two-day Prime shipping, I was able to get books in under 48 hours, which was a blessing because I hated buying books in Los Angeles. If you ever lived in LA, you know how horrible it is to go to a bookstore in behemoth malls like the Grove or Century City, because parking is a fucking chore and you have to fight the over-consuming sheeple just to get a bit of enlightenment. Plus, the bookstore chains were always located in the shittiest spots in these mega-malls because Americans (especially the vapid denizens in Los Angeles) don't read books. Thankfully, courtesy of Amazon, I steadily filled the empty spaces, cubes, and shelves on my bookcase.

In NYC, I had easier access to books because I made weekly trips down to the Strand to read (yeah, I was that guy who clogged up the aisle) and purchase as many used books as I could for $20 (usually 2 or 3, but somedays I got lucky and scored 5 or more). When I was at the lowest of the lowest in the broke-as-a-joke unemployed wanna-be-writer phase just before I got into poker, I used to spend most of my days wandering around bookstores. Before 9/11, I spent at least one day a week at the Borders on the ground floor of the North Tower in the World Trade Center. The rest of my weekday browsing was spread out between the Strand and different Barnes and Noble locations. I read a lot of poker strategy books at the store on Union Square, then went around the corner to play cards in an underground room.

I sat in my office last week and noticed the empty shelves. That was the first time the reality of the move had sunk in. I was finally leaving Los Angeles and got my wish, but for the first time since we pulled the trigger on moving, I had a tinge of... sadness. I looked around the office and realized I will never write there again. I have no idea how many words I wrote at the desk, but that's where I finished off Lost Vegas and re-edited Jack Tripper Stole My Dog. Love it or hate it, I polished off two books in LA and that's something I'll never forget.

The flood gates opened. The room itself has its own memories. Before Showcase moved out, that's where he lived for a few years as a struggling actor in Hollywood. And before that? Who knows how many people sat in the same room (and while in bed and starring up at the ceiling) and wondered if their dreams were going to be fulfilled or come to a scathing halt.

Me? I was living the dream and reached the misty mountain top. As the saying goes, "it's all downhill from there."

I see dreams shattered every summer in Las Vegas, but the City of Angels has its own share of demoralized souls. Everyone seemed so detached from reality. Maybe it's all the botox and spray tans?

I walked into different parts of the apartment including the living room. It was the cleanest I had ever seen it, but it was just a mere skeleton of what it used to be. The picture frames and the good DVDs were already boxed up and driven to San Francisco a few weeks earlier. Our token poker trophies were in storage at Nicky's parents' house.

We're subletting the place in the Slums of BH to a colleague, so Nicky left all of her furniture in the apartment for the meantime. We moved into Halli's massive apartment in San Francisco, which was fully furnished except a bed. Thanks to Dirk Nowitzki and the Dallas Mavs, I won enough money betting on the NBA finals to fund a new bed, which I need for my aching hip and back. But aside from that, we escaped the headache of moving a shit ton of furniture up North. Besides, whatever Halli didn't have, we could buy disposable Swedish furniture at Ikea.

The only items in LA that I owned -- a desk, chair, and bookcase. All three items Nicky bought me for a birthday-office-renovation-surprise. That all stayed behind for now. Oh, and I forgot about the futon I bought (the only thing in the apartment which I actually purchased), which also served as the guest bed. Benjo used it the most over the last few years when he crashed in my office whenever he came to visit. He even worked on the French translation of Lost Vegas sitting in the same spot where I penned the manuscript.

I guess the real weirdness will happen in four to six months when we have to make an official decision on San Francisco and figure out what to do with Nicky's furnishings and my office stuff. Do we stay in SF and sell all her furnishings on Craigslist? Do we go back to LA? Or is it time to move to Colorado? I won't have answers to that for a few more months of living in our new place and new city.

Alas, LA is in the past, San Francisco is the present.