I attended college with Dan Feldman. We were friends, fraternity brothers, and business partners. At one point in our lives, we were that cliche "thick as thieves" and/or "two peas in a pod."

The summer of 1992. I was still 19 years old and utterly clueless. That summer the Dream Team crushed opponents in the Barcelona Olympics because it was the first year NBA pros could play. I'm bombarded by vivid flashbacks of the Dream Team because our ice cream truck was littered with giant McD's souvenir cups featuring Dream Teamers like Michael Jordan and Larry Bird.

One item on my resume was always a conversational piece...

TASTY ice cream was an instant ice-breaker during every single job interview in my adult life. It was always fun to talk about. I had crazy stories. Heck, I had an even crazier partner. How did I get into the ice cream business? Dan Feldman invited me in.

Feldman drove an ice cream truck in his hometown on Long Island, but in the summer of 1992 he wanted to do the same thing in Atlanta. I needed a job and so we wet into business together. We lived in our fraternity house (a handful of guys in one of those gigantic southern mansions) and parked the ice cream truck out back and kept the freezer running using a series of industrial extension chords. The truck was really a van with a freezer in the back. Our stoner friends raided the van late nights and left pocket change on the front seat. We drove one truck but alternated work days. It was fun, but arduous work. The city was nicknamed HOTLANA for a reason... hellacious heat, sweltering, irritating, disgusting summer days in Atlanta. I'd come home every night drenched in sweat because the van truck was more like a sauna.

Twenty years later, I can easily say that the summer of 1992 was one of the all-time greatest summers. In the high-water mark of life, Feldman and I surfed the crest of that wave. 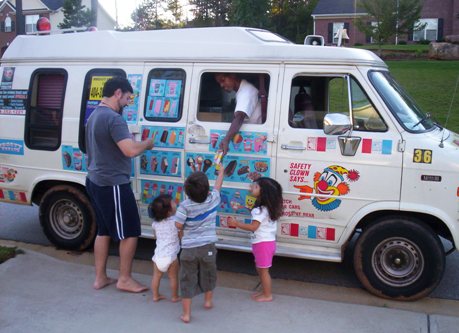 Feldman's initial business plan entailed renting a van from TASTY Ice Cream, an independent business run by a Persian that everyone called The Shah. The Shah was a fair man, but he wouldn't rent to us until we had proper credentials. He told us to get experience at HAPPY ICE CREAM, the largest company in Atlanta. HAPPY'S portly owner looked like a character from The Sopranos and he hired me on the spot. He briefly showed me a gigantic map of Atlanta and its sprawling suburbs. He boasted about his vast territory, much like a king bragging about the size of his kingdom  The hot spots were in yellow. I always had a bit of a photographic memory, so I studied the map.

The HAPPY ICE CREAM training program included sitting in a dark room to watch a series of grainy training videos from the late 70s and early 80s. I was one of three other trainees. Both of them fell asleep within an hour. In all fairness, one of the guys was riding the H train and nodded out. I passed the training/safety exam and got sent out on a test run with one of the veteran drivers. The guy had a ghostly, gravely voice like Miles Davis, and he gave me a crash course in the ice cream biz. Miles said the best part of the job was "getting hit on by single moms." Once my HAPPY training was complete, I graduated and was assigned my very own truck.

The plan with Feldman was to alternate days. On his first day on the job, he crashed HAPPY's truck. Drove it right into the front of a liquor store near the old Techwood projects (that got razed to build the Olympic Village). At the time, it was scary. Luckily Feldman escaped without a scratch on his head. But the truck was totaled and our future with HAPPY ICE CREAM looked bleak.

We returned to the Shah and sorta begged him to let us work for TASTY. I showed him my photocopied diploma from HAPPY ICE CREAM that said I was a certified ice cream truck driver. Feldman was a natural born salesman and pretty much told the Shah that we'd have a truck out 7 days a week and we were young, eager college kids who could log long hours because we switched off days. Feldman told him we'd be the Shah's top earners and driving his #1 truck. Truly a bold statement, but by the end of the summer we were at the top of the Shah's fleet of trucks. Besides, how hard could the competition be? The Shah's main competitor HAPPY hired ex-cons and junkies.

Every morning one of us would drive the van from Emory University to MLK Blvd, where the Shah's shop was located. We were a McCatholic kid from the Bronx and a Jewish kid from Long Island working on a fleet comprised of Middle Easterns and Haitians. We bought inventory (usually whatever we sold out from the night before) and dry ice. We needed the dry ice to keep the goods cold. The kid who worked the freezer was barely taller than Kevin Hart and he wore a jumpsuit that looked like he was climbing Mt. Everest. He spent 10-12 hours a day inside a gigantic walk-in freezer.

The Shah didn't even give us a map. He threw us head first into the ice cream pool, but I memorized HAPPY's route and their top areas. Feldman's business model was simple: undercut HAPPY's prices by a nickel. After a week or so, we developed multiple routes and started out in Atlanta and made out way out to the burbs, before circling back toward the city at the end of our shift.

One day I blew a red light and got pulled over by ATL cops. I apologized and the cop let me off with a warning because his kid would never talk to him again if his kid found out he gave the ice cream man a ticket. I thanked the cop and comped him a red, white, and blue Bomb pop. A couple of weeks into the summer, someone driving a HAPPY truck nearly sideswiped me. He chased me down to a cul de sac. The redneck looked like a mean roadie from the Allman Brothers. He pulled out a baseball bat and threatened to beat my ass and slash my tires if I was ever on his turf. That was the last time we worked in Marietta.

Gas was cheap back then and only 79 cents/gallon at the QT, but the van had its flaws: no AC and a busted radio. We utilized a small booxbom and played nothing but Grateful Dead and Phish bootlegs. Feldman was one of the biggest Deadheads in our fraternity. He also gifted me my first Phish bootleg and he once spent two hours lecturing to me about the beauty and simplicity of Contact. I was a staunch Deadhead back in those days, but thanks to Feldman (and other friends like Wilkins, Lerm, Dave Pizza, and Chicago Bob)... I slowly started appreciating Phish. Twenty years later, I always think about Feldman whenever I hear Contact.

It goes without saying that I always think about Feldman whenever I see an ice cream truck. Instant flashback to the best summer of my life. You'll never ever forget the summer you were 19 years old. Those cherished memories were filled with Feldman's laughter. Heck even a couple weeks after he crashed the HAPPY truck, we were joking around about it. I dunno how many times I uttered the line: "Remember the time Feldman crashed the ice cream truck into a liquor store?"

I always wanted to share a story at a MOTH Storytelling. If I ever got a shot, the summer of 1992 and the ice cream truck was going to be one of my Top 3 stories. It's strange that your memory is fickle... I couldn't even tell you what I ate for breakfast the other day... yet memories from the summer of 1992 were vivid and fresh. Those memories were burned into my skull and etched into stone in perpetuity.

Dan Feldman will always be part of the internal hieroglyphics chiseled into the hallways of my mind.

A couple of months ago, I sent Feldman a message on Facebook. My friends will tell you that I'm NEVER on Facebook, so it was a huge deal that I actually logged in. I posted something on Feldman's wall that I always thought of him whenever I spotted an ice cream truck. He reminded me something I totally forgot: I made up a special song to sing whenever I rang the bell. The van didn't have a fancy sound system but had an old school bell attached to a piece of string. You had to hold onto the steering wheel with your left hand and reach above your head with your right hand to ring the bell on the top of the truck. The string went through a hole in the roof, so if it rained, the ceiling leaked and the rope got soaked.

That's the chorus. I don't recall any other verses. But that's the kind of goofy stuff we used to do.

Feldman turned me onto amazing music. Feldman showed me how to be an entrepreneur and work for yourself. Sometimes someone has to leave your life before you can fully appreciate their impact. I've always been lucky that Feldman was an integral part of the summer of 1992. Between music and business acumen, Dan Feldman impacted me in more ways that I can count.

RIP Dan Feldman. One of a kind. 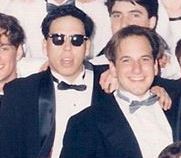