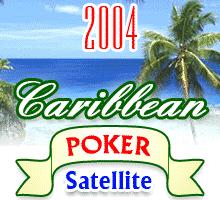 I returned to the tables at Party Poker two nights ago. On Monday night I sat down and played in a Caribbean Poker Satellite Sub-Qualifier. First place paid a seat in the Qualifier. If I win the Qualifier, I make it into the satellite. Basically the winner of the actual satellite gets to go to San Jose, Costa Rica to play in 2004 Caribbean Poker Classic, getting accomodations for four nights and airfare for two people.

A minor technicality sprung up. Who do I take if I win?

OK, here's the situation. I won the Sub-Qualifier on Monday and a seat in the Qualifier. Of course I had a few railbirds cheering me on. Al Cant Hang was there and I always push myself to play better when I have fans watching, especally poker bloggers. Last night I played in the Qualifier and came in fifth place. I didn't get good hands. I was a little down and played in another Sub-qualifier to lift my spirits. I won my second one in two nights, this time I had Jason sweating me. I got lucky as fuck, catching cards left and right. He saw me take down a monster pot with four aces!! It was a lot of fun when you get hands like that. I slowplayed (a term for sandbagging my hand, I let the other players think I had a weaker hand and didn't raise until the last betting opportunity to maximize my winnings) and got a guy to push his stack all in on the river when he hit a full house. My four of a kind was no match. That was all the confidence I needed and I ended up winning my second Sub-Q in consecutive nights. I'll be playing the Qualifier later today.Here's what Jason wrote on his poker blog:

One of the best parts of the tourneys came on the first hand I watched, when Pauly went and hit quad aces! The great part is this guy totally bet into him, and even re-raised him, not believing the doctor had the goods. Very cool. He hung in there without any good cards for quite a while and then managed to catch a series of spectacular suckouts en route to a head-up match with the player who'd been ahead for most of the tournament. I've never been much of a heads-up player, but I recognize good heads-up play when I see it, and I can say that Pauly played very well when it was down to just two. Varied betting and good aggression kept him from every going too far down - if I remember correctly he never trailed by more than 500 chips after the first hand - and yet another spectacular suckout won the whole show for him when his two paired on the river to beat a dominating hand.

Here's the problem. I had a horrible run at the tables from my birthday through Halloween. Atlantic City was a tough trip. The tables at Party Poker were unkind. I dropped almost $2,000 in my worst stretch since I got whooped in Vegas last April. With a bankroll thinner than an anorexic, strung-out, free-basing, Belgium model, I recently agreed to let someone bankroll my play online at Party Poker. If you are bankrolled, you play with someone else's money. If you lose, well, they absorb the losses. You don't lose anything. If you win, you split the winnings (usually 50-50). My earning potential is cut in half, but if I'm still stuck in an atrocious losing streak, at least it's not my money.

Well, a friend of mine who does not play poker (nor gambles) decided to bankroll me after a long conversation the other night. It was clear that this was a trial basis and if all goes well, we'll sit down and discuss plans for 2005. So, if I win the package to Costa Rica, I guess I have to take Briana instead of my brother since she bankrolled me. Thanks again B! Despite the rumors in the past, I was going to always take my brother with me on any tournament I happened to win a seat in major tournaments (Estonia, England, Australia, and now Costa Rica). Let's hope I have this problem in a few days, because it means I won a trip to San Jose, Costa Rica. I'm sure Briana will let me take my brother. I'll have to rework my contract for next year.

I had been trying last month to win a trip to Australia in January. That's on hold for the moment because the 2004 Caribbean Poker Classic is due to start next week! When I get back from Vegas I can try to win a seat at the Aussie Poker Championships. More to come.