I love this time of the year in LA.

During the last three years, I spent the week before Memorial Day in Southern California. It's the perfect place to prep for a lengthy assignment at the World Series of Poker. Since I'll be indoors most of the summer stuck inside a casino surround by utter degenerates, I welcome the chance to soak up the sun and listen to the waves roll up on shore. Outdoors. Nature. 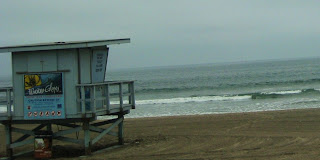 It's the time that I spend at the beach with Nicky that matters the most. We understand how special and soothing the beach time is for us. We relish the calm before the storm. It's one of the only times when we just relax and read books and look out into the ocean and just sit and unplug and stay away from the intertubes and being chained to our laptops. We travel so much for work and have such a weird lifestyle that getting time together to do nothing is rare.

Nothing is more magnificent than an empty beach. Isn't that what everyone wants? A secluded beach all to themselves. Alex Garland wrote a book (that was turned into a Leo flick) about that quest for a secluded utopia. It's so hard to find an empty patch of beach in Southern California without douchebag meatheads acting like jagoffs trying to pick up chicks, or a day without a family who pitched a couple of tents with a dozen rugrats scurrying around in between. And the worst inhabitants of Malibu? Annoying Daddy's Little Princess from the Palisades yapping on their cell phones.

I prefer, the sounds of the ocean and that squishing sound of your feet twisting into the sand. Everything else is just static and exactly what I've been trying to avoid during a pursuit of the simple life.

We drove up to Malibu and hung out at Zuma Beach over the last two days and never managed to actually be completely alone. It was still off-season though, and the beach was nearly empty, even on a Sunday morning. And on Monday? Even fewer souls around. They consider this "winter time" and it only costs $6 to park at Zuma.

Zuma will become more popular starting this weekend and the Memorial Day rush, but by that time, Nicky and I are already on our way to Las Vegas. So basically, we strategically planned to take advantage of the last week before the official beach season begins to bask in the warmth of the sun and enjoy a sparsely populated beach.

I thought that I was going to read Lost Vegas, but I haven't had the urge to pick it up once. I can't get excited to read it. I'm really sick of it all. I won't force the action, but I definitely need at least one read through before I hand it off to a few chosen proofreaders/previewers. That needs to be completed before I leave for Las Vegas in one week.

I'm almost finished with Shock Doctrine trying to read chapters at the coffee shop in the mornings and at the beach in the afternoons. I also printed up news stories that I haven't had a chance to read. Finally caught up on a slew of backlogged reading. Now, if I can only hire a virtual assistant to sift through all that e-mail and all that Twitter-shit clogging up my TweetDeck.

Before we actually dig our toes deep into the sand, Nicky and I have been working out up at Zuma Beach. On Sunday and Monday we completed a three mile jog along the beach. We ran harder on Monday. The overcast skies over the last two days made it perfect workout weather and it wasn't too hot or humid. Kinda cool with the wind whipping off the water. Nicky preferred the locale than working out inside a gym with hipsters there to be seen. I have a long summer ahead of me and I've been trying to get myself prepared for a mentally and physically challenging assignment. After kicking pharmies, I might be in the best shape I've been in, in well over a year. Definitely the best since the accident last summer.

On Sunday, we visited Nicky's parents in Westwood for a BBQ. It was a combination of a Mother's Day dinner, along with a welcome home celebration for her sister Mandy who was in Mexico for several months shooting the Real World. And of course, it was a goodbye party for Nicky who won't be around for two months.

Mandy had plenty of dirt to dish about the Real World and what it was like being behind the lines when the Swine Flu beta test was unleashed. I bought steaks at Whole Foods and Nicky prepped the food on her father's grill. She also made shrimp. Pretty tasty.

We were home for about thirty minutes and lazily digesting the BBQ. I heard a ruckus. It sounded like the guys upstairs were jumping up and down and then fell over. The ceiling shook and that's when I realized that we were having an earthquake.

It was my fourth since being in L.A. full time. The first one happened during breakfast at O'Groats. It felt like a subway rumbled underneath the restaurant. The second one happened when Nicky was away on assignment. I was sitting at the dinning room table when I thought I heard the guys upstairs making noise while playing video games. Turned out it was a mini-quake. A couple of weeks ago, there was another mini-quake. It felt like a truck raced down the street. Nicky was driving down to Hermosa Beach and didn't feel it in her car. I was sitting in the same spot at the dining room table and I barely noticed it.

However, the tremors on Sunday night last about fifteen seconds. The first five were when I looked up at the ceiling and wondered what sort of shenanigans the guys upstairs were doing. Then the ceiling shook and Nicky bolted for the doorway leading to my office and our bedroom. My instinct was to grab my laptop on the dining room table and duck underneath. Instead, I stopped and ran towards Nicky and the doorway until it stopped.

The guys upstairs wanted to bet on the magnitude. Nicky, the quake-veteran put it on the low 4s. I figured 4.8. The guys upstairs went with 5.2. We quickly checked the earthquake site that all California natives have book marked. I have it bookmarked too.

We refreshed a couple of times until the official report was posted at 8:39pm PT. Originally it said 4.7. A few minutes later it was upgraded to a 5.0. On Monday, then downgraded to a 4.7. I was closest and won.

The epicenter was near Inglewood and less than one mile from where the Lakers used to play their games. In the hood! That quake was the closest I've experienced. Maybe that's why we felt it.

The next hour including reading different reports on Twitter and waiting for aftershocks, which I wanted to bet on as well. I have been reading a lot about disaster capitalism in New Orleans post-Katrina and in Iraq post-invasion, that it seemed inevitable that I'd try to capitalize off the act of God.
by Pauly at 5/19/2009 09:58:00 AM