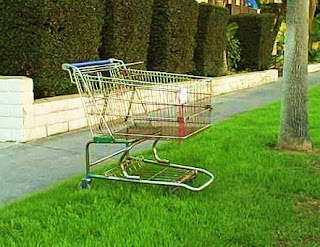 I first noticed the peculiar flatbed a year or so ago.

The engine was loud. You expected it to break down in the middle of the palm tree-lined street. It was out of place in my mind, but more common that I thought in this part of L.A. Every once in a while, an older Mexican guy in a black hat and a long sleeve blue denim shirt drove a beat-up flatbed truck through the neighborhood. On the back of his truck, two or three shopping carts were strapped down, usually two metal ones and a red one from Target.

I always wondered what the old Mexican guy was doing with the shopping carts. He looked like he was from a dystopian future as he slowly made his way up and down the side streets and hauling around shopping carts.

It's not uncommon to see abandoned shopping carts in and around L.A., especially the slums of Beverly Hills which are peppered with lots of "For Rent" signs and random yard sales (more and more frequent every weekend in this atrocious economy). The neighborhood has plenty of side alleys and back alleys. The small apartment buildings have dumpsters and recycle bins which attract homeless people in search of cans. That's there main source of income. They are mostly harmless, very polite, and diligent at their task at hand. Most of them haul around bottles and cans shoved into trash bags and carted around in shopping carts. I used to think that they stole them from the stores, but who needs to when the streets were cluttered with them. It gave homeless dumpster divers a free source of transportation which in turn increased their earning potential.

How did the abandoned shopping carts magically arrive from the stores to the streets? Who stole them? And why?

It doesn't reek like alien involvement such as the cattle mutilations. But there's something odd going on for sure. My curiosity increased over the last couple of weeks. My paranoid self wondered about the random things in my eclectic neighborhood. In the past, I went into detail about the plight at Jack in the Box, the Chinese cooks sleeping in their cars, and the shady things going on next door at odd hours.

Some people, like the old Mexican guy, have interesting jobs in this world as a result of corporate incompetence (from companies like Ralphs) and the public's willingness to steal other people's property (even if it is a nameless faceless soulless multi-national corporation that exploits their workers) that's not locked down.

I thought that the old Mexican guy with the beat-up flatbed truck had a monopoly on the area, until, I bumped into his competition.

Not even one block from my apartment, an abandoned shopping cart sat idle behind a parked SUV. A white van abruptly stopped next to the SUV. A scruffy and huskier version of Oscar de la Hoya with work gloves on jumped out of the passenger seat and we made eye contact. For a split second I had that fight or flight moment where I was ready to bolt down the alley and scale the wall (I know my neighborhood very well and have planned escaped routes just in case of situations when guys jump out of vans and try to kidnap you).

He said hello to me and then opened up the back door. He grabbed the shopping cart in one swift motion and quickly closed the door. He waved at me and jumped back into the passenger side. Those guys were also a part of a local abandoned shopping cart removal service. The van took off and I overheard the Lakers game on the van's radio.
by Pauly at 5/18/2009 06:59:00 AM