I wandered into the coffee shop in the down time after breakfast and just before the lunch rush hour. I prefer to get in before the breakfast rush, but I had stayed up pretty late the night before due to an intense writing session. I crashed at a time when I'm usually waking up.

I discovered that the struggling artisans linger at the end of breakfast rush. Since they don't have an office job, they can enjoy a prolonged and relaxing breakfast including an extra cup or three of coffee.

During this gap in between rushes, you will almost always find two booths occupied by three Hollyweird stereotypes.

The first booth: big ass security guard from one of the dozen weed stories within a five minute radius. Most of them open up between 11am and noon and the guys the size of NFL lineman squeeze into the booth a shovel plate loads of food into their ginormous mouths.

The second booth: two starlets picking at fruit and cottage cheese. They were the hottest girls in their respective small towns, high schools, and colleges. Boys lusted after them and masturbated to their MySpace photos. But in LA, the small-town princesses are among the hordes of non-working actresses humping the dinner shift at Sushi Roku while sitting through a couple of cattle call auditions a week. I don't like to eavesdrop on the starlets' airy conversations, rather, I make a point to sit very far away and tune out their static.

The third booth: two or three guys, who if they lived in any other city, you'd call them hipsters, but here, they might be mistaken for a L.A. Douchebagsicus, but a closer inspection would reveal that they were even a lower form on the evolutionary scale -- they were Industry Douchemperious. At least one or more of them is an actor and the rest are (yawn) writers. They all look similar: unshaven, wearing an ironic t-shirt, and decked out in $120 jeans. Oh, and every single one of them is working on a screenplay.

The loudest in the third booth booth dominated the conversation. Typical insecure actor who fed off the attention from others. He found it necessary to show off his chops to the starlets in the first booth. Shakespeare said all the world is a stage, so Alpha-actor used the coffee shop as his Globe Theatre. He sprang up out of the booth and annoyingly projected ten seconds of dialogue from Inglorious Basterds.

No one clapped at his shoddy performance. Alpha-actor's friends looked embarrassed and shrunk a few inches into the booth. The starlets were unimpressed, barely paying attention to their own vapid conversation let alone the impromptu sketch.

I stuffed a chocolate pancake into my mouth and sifted through UberTwitter on my CrackBerry as the Alpha-actor sat down and then shifted the conversation to his screenplay. He attempted to dazzle his out-of-work friends with a teaser of his current screenplay, which he had to put on hold while he heavily auditioned during pilot season.

Here's the deal... I overhear almost fifty or more screenplay pitches a year in LA. Everyone in this fuckin' town is writing one, shopping one, or thinking about writing one. Since everyone loves to talk about themselves, I eventually hear a few pitches. I could be stoned out of my mind and wandering the cereal aisle at Whole Foods when I stumble upon two people discussing second act structural issues in their version of Steel Magnolias set against a post-apocalyptic wasteland.

I hear at least a dozen screenplay pitches inside of the coffee shop while minding my own business. Most of them are horribly lame (like the one guy who sent his vampire script to Christina Ricci and she never returned is calls). I really wanted to hate Alpha-actor's screenplay because of that cheesy move with belting out lines from a Tarrantino flick. But I gotta say... it wasn't a bad idea... it was actually... compelling. I smirked when he started off with the typical mobster movie spiel. But he quickly won me over when describing a couple of characters and the main plot. His screenplay somewhat appealing, so much so, that I decided to lift some of his back story, tweak it a bit, and write myself a better screenplay! 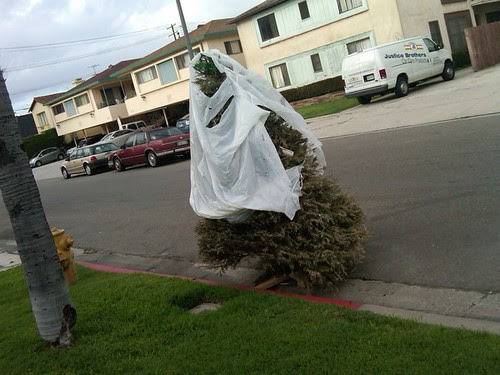 I pulled an ultimate stoner move on my way back from the coffee shop. Since I needed to get back to the apartment to put in some bets, I drove down the street. I forgot to roll up the windows after I parked and left the car like than for a few hours. Luckily no one stole the car or any of the contents. We had nothing in there anyway save for a Radiohead CD, a couple of Phish bootlegs, and a crank-wind-up flashlight.

I was pleased to finally see the abandoned Christmas tree finally picked up by the local trash collectors. Whoever originally owned the tree tossed it out at the end of February. It was yellowing at that point. The dead tree sat parked in between two cars for over two weeks when the eyesore finally disappeared sometime before St. Patrick's Day. We live on a predominately Jewish block and I wonder if someone dropped a dime on those damn Christians cluttering up the neighborhood with their ritualistic trash.
by Pauly at 3/19/2010 02:29:00 AM