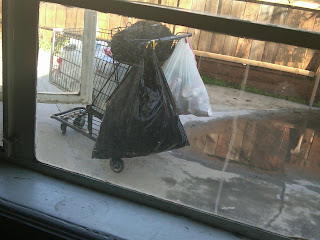 Weirdness abounds at the 6am hour in the City of Angels. It's that grey area between the light and the dark -- between the denizens of night slackers converge with the A-type personality go-getters. The streets are still empty but it's the calm before the storm. Within minutes, the first steady trickle of rush hour commuters and large orange buses start buzzing down Pico Blvd.

I used to be the guy staying up all night and wandering around the streets of Beverly Hills at dawn with the other vampires, insomniacs, pothead writers, speed freaks, and coke fiends. But I've flipped my schedule. I'm crashing before Midnight and waking and baking at 4:20am to start my day. The coffee shop opens at 6am and I like to get an hour of writing in before breakfast. That way I can come home, put in a couple of hours of work and already by 9am, I've had a productive day.

Ah, dawn in LA... reminds me of being all doped up in a dreamlike purgatory between sleep deprivation and reality. That's when the paranoia burrows deep under my skin. The auditory hallucinations torment me and I start hearing things that are not there. And actual noises freak me the fuck out. That's why when I'm wide awake (and for the most part relatively sober) at 6am, I barely react to the noises. To me, it's just part of the morning routine. The birds start chirping. Someone's alarm clock goes off across the alley. The bums start looking through the trash and you hear the distant echos of bottles clinking against one another and the cracking of aluminum cans smashes against each other.

At this point, I recognize about 75% of the trash diggers. I see them out the window when I'm sitting at the dining room table during my morning writing session. There's an old Mexican guy in an old school Army flack jacket who waddles down the alley carrying two huge IKEA-bags filled with cans. One a day, an old black guy with a grey goatee and white hair pushes a shopping cart filled with newspapers and empty spaghetti sauce jars. I'm assuming that guy is just deranged.

I don't think they are all homeless. For example, one morning I was walking to the coffee shop and ran into a guy who had a pick up truck that he double parked in front of our apartment. He was very dark skinned and spoke in some weird accent, maybe the Caribbean? Angola? Another guy in a stained hoodie rides through the alley on his bicycle. If there's any one of the dumpster divers who I worry about robbing us -- it's that guy, which is why I took a stealth photo of him --just in case. My theory is that he's a junkie who sorts through trash but also cases out different places to rob. Most robberies happen because you made it easy for a thief to rob you -- like something so simple, yet stupid like leaving a door or window unlocked. Anyway, the junkie's bicycle is the perfect getaway vehicle. Ah, then again, maybe I'm totally wrong and he's just an ambitious law-abiding junkie who collects bottles to pay for his daily fix?

The other morning, I actual saw one of the homeless dude dive into a dumpster. Usually they open it up and shift around garbage, but they mostly key in on the recycle bins. However, this dude opened up the top hatch and jumped in!

Anyway, I encounter random neighbors. There's a four-story apartment building down the street. On the second story porch, it's rare not to find a guy sitting up. Most of the time, two twenty-something dudes are sitting down on plastic chairs and yapping on their cellphones. Who are they talking to at 6am? On Monday, they were smoking a joint while talking on the phone. I didn't notice at first -- but then my nose caught the smell. The pungent aroma. I nodded at my approval. Only one of them nodded back.

On Tuesday morning, I witnesses the tail end of a drug deal. I noticed one of my neighbors from across the street was standing outside smoking a cigarette when I left at 6am. No big deal. I always see him doing that -- compulsively wearing dark jogging pants and a white hoodie. When I returned from the coffee shop 40 minutes later, he was just stepping out of a pimped out ride driven by a young guy who was sporting some serious bling. We have three weed stores within a three block radius. We have five or six more within a ten minute walk. There's no way he was buying herb. Made me wonder what sort of druggie that guy was. Coke? Meth? It's important to know if you have any serious drug fiends in the area.

Some mornings, I come across neighbors walking their dogs. On my way back from the coffee shop, I sometimes run into a cougar with a huge rack wearing flip flops and pink sweat pants, while letting her dog take a shit on a patch of grass in front of Jack in the Box. I make sure I don't walk on that grass because she never cleans it up. I'm guessing that she's a former porn worker and she has fucked up lips because she told her cheap-ass plastic surgeon that she wanted to look like Angelina Jolie but she ended up looking like Rihanna in those TMZ photos after Chris Brown used her face as a punching bag.
by Pauly at 3/26/2010 09:50:00 AM